Australia’s bushfire (wildfire) emergency has been shared worldwide with images of devastation, injured koalas and confronting fires going viral. Some of these appear to show blazes all over the country. But these images are not realistic and have been flagged by Facebook and Instagram as “false information”.

For example, this image is not a photograph, but a graphic visualization of thermal satellite data. When a particular pixel is very hot, it is classified as a hotspot. But the area shown in the graphic may be significantly larger than the area of the hotspot. And the hotspot can be caused by other things besides fires. This image compiles one month of hotspot data (from December 5 until January 5) and the orange glow is exaggerated which makes the fires seem much larger than they actually are. In this case an artist’s visualization has been misinterpreted.

Another hotspot graphic uses symbols which cover a larger area than the fires. These oversized graphics give the impression a greater area is on fire than is actually true. They show the location of hotspots, but not their area. The different colours of the icons represent how long it has been since a hotspot was detected; red being more recent and orange/yellow being two to three days old. In this case the symbols have been misinterpreted. 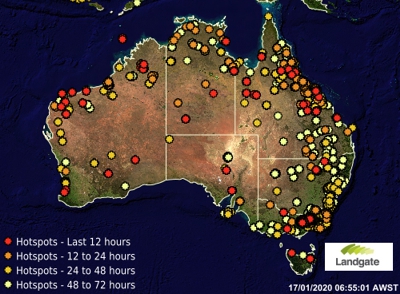 This detection of hotspots by satellite sensors has the following limitations:

DEA Hotspots is a remote sensing technique. Remote sensing is the acquisition of information from a distance above the earth without making physical contact with it. This process involves the detection and measurement of radiation of different wavelengths reflected or emitted from distant objects or materials. The sensors for remote sensing (which monitor electromagnetic radiation) are usually flown in satellites or in aircraft.

Infrared and visible cloud photographs taken by geostationary satellites for weather analysis and forecasting are another example of remote sensing. A geostationary orbit (or a geosynchronous equatorial orbit), is a circular orbit 35,786 km (22,236 miles) above Earth’s equator and following the direction of Earth’s rotation. Because the satellite orbits at the same speed that the Earth is turning and its orbit is in the same plane as the equator, the satellite seems to stay in the same position in the sky relative to the Earth’s surface. This particular orbit is used for meteorological and communications satellites. In this case the remote sensor is about 35,790 km (22,240 miles) away from the earth, which is about 70 times the distance used by DEA Hotspots.

Ground truthing is essential for the calibration and correct interpretation of remote sensing data. “Ground truth” refers to information collected about the surface of the earth. It’s on-site (or local), and not remote. Ground truth allows the remote image data to be related to real features and materials on the ground. The collection of ground truth data enables calibration of remote-sensing data, and aids in the interpretation and analysis of what is being sensed.

The geologic time scale is a system of chronological dating that relates geological strata (stratigraphy) to time. It is used by geologists, paleontologists, and other earth scientists to describe the timing and relationships of events that have occurred during Earth’s history. The geologic time scale is a remote sensing method where observations or measurements made today are interpreted from a distance to infer the date of events that are assumed to have occurred long ago. In this case the “remote sensor” (current observations) is assumed to be millions and billions of years away from the actual event. However, in this case there is no ground truthing because no one can go back in time and observe/record whether the events actually occurred or when they actually occurred. But as remote sensing data without ground truthing (or calibration) are useless, the geologic time scale is useless! It just reflects the presuppositions behind it; not what actually occurred.

The biblical time scale is preferable to the geologic time scale because it’s based on the facts of written history rather than the uncalibrated assumptions of remote dating (or historical science).

Just like the misleading fire maps, the geologic time scale is “false information” because it’s based on false interpretation of the evidence.

The Princeton theologian J. Gresham Machen warned:
“False ideas are the greatest obstacles to the reception of the gospel. We may preach with all the fervor of a reformer and yet succeed only in winning a straggler here and there, if we permit the whole collective thought of the nation or of the world to be controlled by ideas which, by the resistless force of logic, prevent Christianity from being regarded as anything more than a harmless delusion. Under such circumstances, what God desires us to do is to destroy the obstacle at its root.”

These worldviews are self-refuting.

Materialism, a belief that asserts that all things that exist are made up of matter and energy, is itself not material or energy, but a nonmaterial concept. This means materialism cannot exist within materialism! Thus, materialism is self-defeating and refuted.

Naturalism, a belief that nature (all that is physical) is all that exists, is itself not part of nature—being conceptual and nonphysical. Thus, naturalism stands opposed to naturalism! This is inconsistent and self-refuting.

The big bang theory and the theory of biological evolution both include miracles that cannot be explained by observational science (natural explanations of natural phenomena):
– Something came from nothing at the beginning of time. Quantum fluctuations can’t be the cause because that assumes the existence of a quantum vacuum and quantum mechanics instead of nothing.
– There was a brief rapid expansion of space (which defied all known laws of physics) in the early universe (called cosmic inflation). No-one knows why inflation would start or stop.
– The origin of life from non-living matter (abiogenesis or chemical evolution).
So these foundational theories of naturalism and science rely on non-scientific miracles, which is inconsistent and self-refuting.