Genocide of the Midianites? 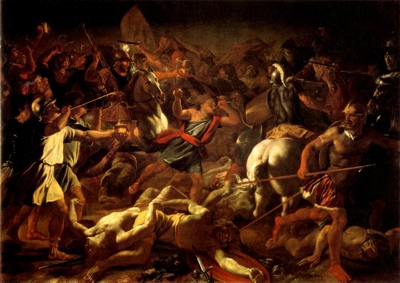 Joseph was the son of Jacob and the great-grandson of Abraham. His half-brothers were jealous of Joseph and wanted to kill him. But the eldest son, Reuben, convinced them to sell Joseph to some Midianite traders who were travelling to Egypt. The Midianites in turn sold Joseph as a slave in Egypt. This led to Jacob’s family migrating to Egypt because of a famine in the Middle East. Joseph’s brother’s evil deeds ended up saving the Hebrews from starving in Canaan. Joseph told them, “You intended to harm me, but God intended it for good to accomplish what is now being done, the saving of many lives” (Gen. 50:20).

After several generations, God raised up Moses to rescue the Israelites from slavery in Egypt. He was protected from infanticide and was brought up in the royal household. But after Moses killed an Egyptian, he escaped to Midian, a land east of the Gulf of Aqaba (now in Saudi Arabia). There he married Zipporah, a Midianite (Ex. 2:15 – 4:20) and he served his father-in-law, Jethro, as a shepherd for forty years.

While the Hebrews were travelling from Egypt to Canaan, the nations were terrified of them because they had heard about their military victories (Ex. 15:14-16; Jos. 2:9-11; Hab. 3:7). Before the Hebrews were about to enter the land of Canaan (Num 25:1-18; 31:16), at Shittim the Midianites joined forces with the Moabites in order to hire Balaam to curse Israel (Num. 22). Balaam was a pagan prophet, but he was unable to curse Israel. Instead he suggested that Moabite women go to the camp to destroy Israel from within, by causing them to break God’s laws against sexual immorality and marrying pagan women and worshipping pagan gods. Many Israelites sinned in “the Peor incident” The Moabite women enticed the Hebrew men into sexual immorality and invited them to pagan sacrifices to Baal of Peor. And a prominent Midianite woman, Kozbi, was also involved (Num. 25:6). God commanded that the Hebrews who had sinned in this way were to be put to death. In the meantime, God punished the Israelites with a plague and 24,000 people died (23,000 died in one day, 1 Cor. 10:8). But the plague stopped when Phineas killed Zimri and Kozbi in obedience to God’s command.

Then God commanded Moses, “Treat the Midianites as enemies and kill them. They treated you as enemies when they deceived you in the Peor incident involving their sister Kozbi, the daughter of a Midianite leader, the woman who was killed when the plague came as a result of that incident” (Num. 25:16-18).

Then God commanded that a census be undertaken so as to allocate land in the promised land to each tribe in proportion to their population. This found that there were 601,730 men “who were able to serve in the army of Israel” (Num. 26:2, 51).

According to the NET Bible, “The Midianites had attempted to destroy Israel with their corrupt pagan practices, and now were to be judged. Midian’s efforts were calculated and evil. The war was commanded by the Lord and was to be divine vengeance on the Midianites. So it was holy war. It was part of the judgment of God upon those who would destroy or pervert His plan and His people.”

But this wasn’t the end of the Midianites! They appear again as enemies of Israel about 240 years later (about 1169 BC). The book of Judges describes cycles of disobedience when the Israelites followed pagan gods rather than the true God that brought them into Canaan (Jud. 1:10-13).

When the Israelites turned to idolatry once again, God “gave them into the hands of the Midianites” for seven years (Jud. 6:1-6). During this time period the Midianites invaded Israel periodically (Jud. 6-8). On one occasion they invaded Israel on camels and were camped in the valley of Jezreel (Jud. 6:33). It is thought that they were among the first to use camels, which gave them greater mobility and striking potential. Since they were apparently not numerous enough to wage war against the Israelites alone, they often formed coalitions with surrounding peoples, such as the Moabites (Num. 22:4-6), the Amalekites and other tribes from the east to oppress the Israelites (Jud. 6:3, 33; 7:12). So the Midianites continued to attack the Israelites.

Then God raised up Gideon to defeat the Midianites who were nomads from the desert east of Moab and Ammon. Gideon’s small army of 300 men defeated the hordes of Midianites “like locusts in number” (135,000 soldiers) who were bent on invading the fertile land the God had given to Israel (Jud. 6:1-8:21). Their defeat was as event long remembered in Hebrew history (Ps. 83:9; Isa. 9:4; Hab. 3:7). So the Midianites were subdued and didn’t attack Israel anymore (Jud. 8:28).

The Midianites had oppressed Israel for seven years and now were to be judged. The war was commanded by the Lord and was to be divine punishment on the Midianites. So it was holy war. It was part of the judgment of God upon those who would destroy or pervert His plan and His people.

That’s the history of the Midianites according to the Bible. The Midianites attacked God’s people when they were on the way to Canaan and after they had occupied the promised land. Except for the family of Jethro, the Midianites were hostile to Israel. The Hebrews were instructed to kill the Midianites. The principle behind this command  is that God judges (punishes) those who oppose Him or rebel against Him.

This principle applied to the Hebrews as well. Those who rebelled against God at the Peor incident at Shittim were also punished.

By the way, the armies of other nations who attacked the Hebrews en route to Canaan (like the Midianites), the Amalekites, the Amorites and the people of Arad and Bashan were also completely destroyed (Num. 21:1-3; 21-35). This pattern of destruction is unique to the nations that opposed Israel’s settlement of Canaan.

The Midianites tried to destroy Israel. Their hatred of the Israelites and their repeated attempts to destroy God’s people led to their ultimate doom. Their fate should be a warning to all who oppose God’s purposes.

The command was justified in its original context, but it doesn’t apply to other situations. But the modern application of this passage relates to obeying God’s commands to us in the New Testament, and realizing that we are all sinners who deserve God’s judgment, and realizing that our main enemies are spiritual and not physical, and not retaliating when provoked but leaving revenge up to God.

Despite killing all the Midianite soldiers, all the boys and most of the women, the nation survived to attack Israel about 240 years later. This shows that an enemy can be revived from a small number of survivors to become a military threat once again. Besides this physical threat, a small number of survivors can be a spiritual threat if they keep worshipping pagan gods. After all, the main enemies of God’s people are spiritual and not physical.

An example and warning

Immorality was one of the failures of the Israelites during the exodus journey. Paul said that it was an example for our learning (1 Cor. 10:6-13). God gave us examples in the Old Testament so that we will not fall to the same temptations as they did.

Paul quoted the Peor incident and then said, “These things happened to them [the Israelites] as examples and were written down as warnings for us, on whom the culmination of the ages has come. So, if you think you are standing firm, be careful that you don’t fall!” (1 Cor. 10:10-11). Spiritual pride will lead to a spiritual fall.

The judgment of the Midianites doesn’t make genocide or war acceptable today. But they were a spiritual threat to the Israelites. Sexual immorality was a threat to Christians in the early church and it remains a great threat today. What spiritual threats do you face?

We are all sinners who deserve God’s judgment. We don’t always serve the true God who created the universe. The only way to escape is to trust that Jesus took this judgment for us when He died and rose back to life again.

Also see: Genocide of the Amalekites?

This entry was posted on November 14, 2021 by George Hawke. It was filed under Christian, Old Testament, Spiritual and was tagged with bible, genocide, Gideon, Hebrews, Israel, Joseph, Midianites, Moses, war.