The relationship between voluntary assisted dying, suicide and murder 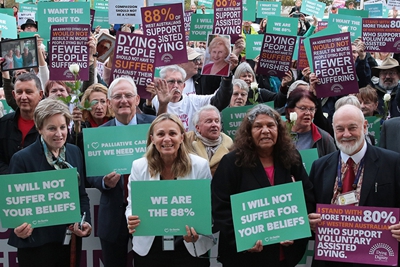 A vote on the NSW Voluntary Assisted Dying (VAD) Bill 2021 in parliament has been delayed until next year. The Bill intends to, “create a safe framework for people who are in the final stages of a terminal illness and who are experiencing cruel suffering that cannot be relieved by treatment or palliative care to be provided with the choice to die peacefully, with dignity and surrounded by loved ones” (NSW PRS, 2021). NSW is currently the only state in Australia that doesn’t allow terminally ill people to seek medical assistance to end their own lives. VAD is defined in Appendix A.

This post looks at what the Bible has to say about, VAD, euthanasia, suicide and murder.

The bill allows someone who is 18 years and over to access voluntary assisted dying. The person must be assessed as having decision-making capacity who is acting without duress. They must be terminally ill with death expected within six months, or within 12 months for those with a neurodegenerative disease. Their condition must cause intolerable suffering. The first step would be for them to make a request to a senior trained doctor, who will be allowed to refuse the request on conscience grounds. The doctor will assess the person to make sure they fit the criteria and must refer them to other specialists, such as oncologists or psychologists, if they are unsure. If they are eligible, the person must sign a written declaration in front of two witnesses, requesting voluntary assisted dying. A final request is made to their doctor for the prescribed substances. Once the person has the drug they can administer it themselves or ask a health practitioner to do so. An independent witness must be present while a health practitioner administers the drugs and must certify that it was voluntary.

Suicide in the Bible

The account of Saul’s death in 2 Samuel 1:1-16 is a case of VAD. Saul was mortally wounded and asked an Amalekite to kill him. After doing this the Amalekite brought Saul’s crown to David. David and his men mourned Saul and the Amalekite was executed, which was the punishment for murder. So, the person who carried out the VAD was deemed to be guilty of murder.

The Bible views suicide as equal to murder, which is what it is—self-murder. So, according to the Bible, suicide is a sin. God is the only one who is to decide when and how a person should die. God is the giver of life. Suicide is ungodly because it rejects God’s gift of life. No one should presume to take God’s authority upon themselves to end their own life.

Murder in the Bible

In Old Testament times those guilty of premeditated murder were to be executed (Gen. 9:5-6). The reason for this is that people are “made in the image of God”. They are made by God for God, to be in fellowship with Him. Murder is an attack on the image of God.

Similarly, the medical authorities who enable suicide under this Bill are responsible for the death of their patient. They will be deemed by God to be guilty of murder. Although the legislation offers protection from liability (Appendix B), this only apples to human courts, and not to the realm of the God who created the universe!

As VAD and euthanasia are the intentional killing of innocent human beings, according to the Bible they are both murder. There is no provision in the Bible for killing on grounds of diminished responsibility (on the basis age or illness) and there is no provision for compassionate killing, even at the person’s request. Similarly, there is no recognition in the Bible of a ‘right to die’ as all human life belongs to God (Ps. 24:1). Our lives are not actually our own. Suicide (and therefore assisted suicide) is equally a breach of the sixth commandment. Only God has the authority to take human life and human beings may only do so under God’s delegated authority (Rom. 13:4).

When David was in deep distress he prayed for deliverance from his enemies,
‘But I trust in you, Lord;
I say, “You are my God.”
My times are in your hands;
deliver me from the hands of my enemies,
from those who pursue me.’ (Ps. 31:14-15).

The book of Lamentations bemoans the destruction of Jerusalem by the Babylonians in 586 BC. Although this caused depression, through the mercies of God, there was hope,
“Because of the Lord’s great love we are not consumed,
for His compassions never fail.
They [God’s love and compassions] are new every morning;
great is your [God’s] faithfulness.” (Lam. 3:22-23).

God’s love is greater than human suffering. It is unfailing (Lam. 3:32). It enables us to go on, to get up to face the day. Our trials may seem overwhelming, but we can endure because God’s love is far greater. God’s continual love for His people brings joy (Ps. 30:5).

Paul described how Christians should respond to suffering. “We are pressed on every side by troubles, but we are not crushed. We are perplexed, but not driven to despair. We are hunted down, but never abandoned by God. We get knocked down, but we are not destroyed” (2 Cor. 4:8-9NLT). Suffering is inevitable in the sinful world – but it shouldn’t lead to despair. Human weakness provides the occasion for the demonstration of God’s power. Christians develop strength from trials. It is there that they find how God sovereignly works in their lives. Victory comes through adversity. Those who trust in God will never give up hope because God never abandons them. No matter what trials came, God was with them through it all.

“Suffering can be treated without euthanasia. There is a clear distinction in medicine between, taking action with the specific intention of shortening life – euthanasia; and withholding medical treatment because that treatment is of no further benefit to the patient or is burdensome to the patient. It is also acceptable to administer pain-relieving drugs when the primary desired effect is to relieve the pain, but where there is a secondary and undesirable effect of shortening life.” (TCI, 2021)

Death is not the end

“God created a perfect world that has ‘fallen’ as a consequence of our rebellion as human beings against God. But God’s intervention through Christ’s death and resurrection for our sins and on our behalf (Rom. 5:8; 1 Cor. 15:3) means that through the eyes of faith we can look forward to a new world after death with God where there is ‘no more death or mourning or crying or pain’ (Rev. 21:4). For those, however, who do not know God euthanasia is not a ‘merciful release’ at all. It may rather be propelling them towards a judgment for which they are unprepared followed by eternal separation from God in hell (Heb. 9:27; Rev. 20:15). Thus, it may be the worst thing we could ever do for them!” (Saunders, 2013).

NSW Premier Dominic Perrottet, who is opposed to the VAD Bill, said the answer to suffering was not to offer death but care, comfort and compassion. “I believe better palliative care is key. No one’s suffering must be beyond relief with dignity maintained at the end of life.” Palliative care is a better way to manage any suffering and pain associated with the end of a person’s end of life than VAD. And Queensland MP Andrew Powell declared his Christian beliefs influenced his decision to oppose VAD (Appendix C).

VAD is a euphemism. It is Voluntary Assisted Suicide (VAS). But the VAD Bill is worse than a suicide or a murder alone because it involves both suicide (by the patient) and murder (by the medical practitioners).

The VAD Bill is contradictory to the Judea-Christian faith and the ten commandments described in the Bible which are the foundation of the rule of law in the western nations. It is part of the secular move away from this foundation.

The current prohibition on taking the life of a person or enabling their suicide is a vital boundary for protecting people and relationships within our communities.

The VAD Bill is part of the secular move away from the Judea-Christian foundation of our laws.

According to the Bible, VAD and euthanasia involve both suicide (by the patient) and murder (by the medical practitioners). And VAD underrates the value of human life – it ignores the fact that every human being is made in the image of God

‘Voluntary assisted dying’ (VAD) is “an end-of-life choice which refers to the administration of a prescribed substance, either by self-administration or by a registered and suitably qualified health practitioner, with the purpose of bringing about the person’s death. It is based on the person’s voluntary request and follows a process of requests and assessments” (QLRC, 2021).

‘Euthanasia’ is “the intentional taking of a person’s life by another person to end intolerable suffering”.

‘Assisted suicide’ occurs where “a person causes their own death after being given the means or knowledge to do so by another person”.

Appendix: B Protection from liability

“The teachings of Christ and God also talk about the sanctity of life and that we as humans are created in the image of our maker, God. That implies that all human life is sacred. It is a sacredness and an image that is inherently in each of us, regardless of how young, old, healthy, sick, able-bodied or disabled we are. That image was valued so highly by God that, to save us from ourselves, Jesus Christ went all the way to an incredibly painful death on a cross for me. I have been asked by some to ignore my faith. I am sorry but I cannot help but let those teachings, that belief and my efforts to be more like Christ influence my decision here today.” …

“Though it pains me to disappoint many in my electorate of Glass House, when my moral compass and the experts align, I cannot possibly support this legislation.” (QP, 2021)

The content of “Suicide and the Bible” is based on an article on the “Got Questions” website titled “What does the Bible say about suicide?”

This entry was posted on November 18, 2021 by George Hawke. It was filed under Christian, Culture, Spiritual and was tagged with bible, euthanasia, murder, suffering, suicide, Voluntary Assisted Dying.