The command to keep the Lord’s Supper 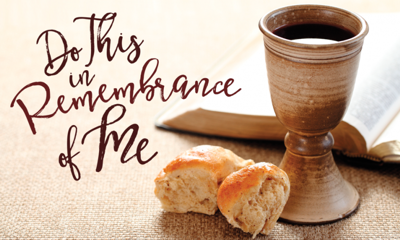 The best explanation of the Lord’s Supper is given in 1 Corinthians 11:17-34. It begins, “For I received from the Lord what I also passed on to you: The Lord Jesus, on the night He was betrayed, took bread, and when He had given thanks, He broke it and said, ‘This is my body, which is for you; do this in remembrance of me’. In the same way, after supper He took the cup, saying, ‘This cup is the new covenant in my blood; do this, whenever you drink it, in remembrance of me’” (1 Cor. 11:23-25NIV).

Paul begins “I received from the Lord what I also passed on to you”. He received this information from the Lord. It may have been a direct revelation, or it may have been passed on by others who had heard it from Jesus. The Lord used two visual aids – bread symbolizing His body and the cup symbolizing His blood. The bread represents the person of Christ, and the blood the work (death) of Christ.

It says, “When He had given thanks”. This is thanksgiving for Christ’s sacrificial death. Jesus thanked the Father for His plan of salvation. That’s the theme of our prayer before we take the emblems. We can thank God the Father, Son, and Holy Spirit for carrying out the plan of salvation.

Then He took bread and broke it and said, “This is my body”. This phrase is metaphorical. The “bread” represents His incarnation into humanity. The elements of the Lord’s Supper are pictures of the incarnation of Christ and Jesus’ sacrificial death for our sins.

Then He says, “Which is for you”. It was a substitutionary, vicarious death. When Jesus died and rose again, He took the penalty for our sins.

Then He comes to the main point. “Do this in remembrance of me”. That’s how we are to remember Jesus. We can’t look at a photo or video of Him. Although we can read what He taught in the gospels, here we are told how to remember why Christ did what He did. We eat the broken bread and remember the significance of His sacrificial death. This is a command from the Lord – He said “Do this …”. Christ asks us to remember Him and what He has done.

Then He took a cup of wine and said, “This cup is the new covenant in my blood”. His sacrificial death ratified the new covenant through which we can saved from our sinful state and join the New Testament people of God. Each of the disciples was commanded to drink of the cup, binding them to this covenant.

Then He repeats the command, “Do this in remembrance of me”. We drink the wine and remember the significance of His death. That’s how we are to remember Jesus.

The phrase, “whenever you drink it” implies that we should take the Lord’s Supper regularly. There is evidence in the Bible of Christians celebrating the Lord’s Supper and taking a collection for the needy on Sundays (the beginning of the week).

Bible passages can be categorized as a command, a model to follow, or a report of events (Appendix). The Greek verb for “do” in v.24-25 (poieite) is a present imperative, which is a command to be obeyed continually. These are not suggestions, but commands. This remembrance is commanded. It isn’t necessary for salvation. But it should follow salvation. Like the great commission, it was spoken to the disciples who became leaders in the early church. Today it applies to all true Christians.

Many nations remember their leaders by erecting stone or metal monuments. Taking the bread and wine at the Lord’s Supper is how we are to remember the cost paid for our sins in liberating us from the penalty of sin.

Participation in the Lord’s Supper is not an option. And prolonged absence from it is spiritually unhealthy.

The purpose of the Lord’s Supper is to remember the Lord’s death for our sins as an historical event.

Sharing in the Lord’s Supper is a command for believers to keep. It’s not an option. Do you obey this command?

Father we thank you for sending Jesus as a man so He could die for the sins of the world. The broken bread symbolizes His broken body. And receiving the bread reminds us that we receive the benefits of His sacrificial death. And we offer thanks and praise for all that you have done through the Lord as we share the bread and the cup together. In Christ’s name, Amen.

Understanding and obeying (or applying) the Bible helps us to live in a godly way. Bible passages can be categorized as a command, a model to follow, or a report of events.

A command is mandatory (not optional) and prescriptive (not descriptive). For example, the laws given to Moses for the Israelites, including the ten commandments.

A model to follow is a behavior that should be followed if permitted by the circumstances. For example, the practice of Christians meeting together on the first day of the week or of deacons serving in the church.

This entry was posted on February 9, 2022 by George Hawke. It was filed under Christian, God and Jesus, Spiritual and was tagged with bread, command, cup, Lord's supper, wine.