Our church often makes reference to the 7 deadly sins. What are they? Why are they called deadly? What does the Bible say about them? 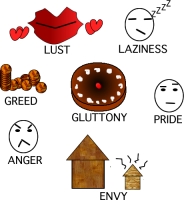 The medieval Church recognized the following as seven deadly sins: pride (excessive self-esteem), envy (jealousy), gluttony (over-consumption), lust (excessive sexual desires), wrath (excessive anger), greed (excessive desire for wealth, status or power), and sloth (laziness). This list of sins was used to educate and instruct Christians concerning humanity’s tendency to sin in an era when most people couldn’t read the Bible for themselves. They were called “deadly sins” because it was believed that they threatened eternal damnation in hell. And because they were viewed as being the most serious sins, they were also called “capital” or “cardinal” or “mortal” sins.

God’s standards are clear in Scripture. They not only include the Ten Commandments and the Law, but the Bible also tells us that “there are six things the LORD hates, seven that are detestable to Him: haughty eyes (pride), a lying tongue (dishonesty), hands that shed innocent blood (murder), a heart that devises wicked schemes, feet that are quick to rush into evil, a false witness who pours out lies (perjury) and a man who stirs up dissension among brothers (family discord)” (Prov. 6:16-19 TNIV).

The Bible says that “all wrongdoing is sin” and “whoever keeps the whole Law and yet stumbles at just one point is guilty of breaking all of it” (Jas. 2:10; 1 Jn. 5:17). Therefore, it is wrong to link the degree of sin with salvation. Everyone has sinned against God and every sin is serious because the penalty for sin is death (Rom. 3:23; 6:23). In this sense, every sin is “deadly.” If it is not forgiven, it leads to eternal punishment in hell. Since in the Bible there is no categorization of sins with respect to salvation, the “deadly” sins do not threaten eternal damnation in hell any more than any other sin, even minor sins.

Fortunately, God has provided a remedy so we can avoid going to hell (Isa. 1:18; Rom. 5:8). When He was executed on the cross, Jesus Christ took upon Himself the punishment that we all deserve. The deadliness of sin was erased through the death and resurrection of Christ. The confession of our sins leads to our forgiveness (1 Jn. 1:9). However, if we do not accept what God has offered, then every sin we commit will be “deadly” (Jn. 3:16-18).

Are there any sins which can’t be forgiven? The Jewish religious teachers committed an unpardonable sin when they attributed Christ’s miracles to Satan (Mt. 12:31-32; Mk. 3:22, 29-30; Lk. 12:10). His miracles were done in the power of the Holy Spirit. Such blasphemy against the Holy Spirit is probably not applicable today because Christ is not physically on earth.

The sin of apostasy, which involves publicly rejecting that Christ was the Son of God, is also unpardonable (Heb. 6:4-6; 10:26; 2 Pet. 2:20-22; 1 Jn. 2:19). In this case a person who had been associated with the Christian faith, but never was a true believer, abandons Christianity and becomes an enemy of Christ. This is probably the “sin that leads to death” which John seems to apply to the Gnostics (1 Jn. 5:16). This is where the idea of “mortal sins” possibly comes from, but the verse refers to apostasy, not the seven deadly sins.

Other passages that have been used to justify mortal sins are: 1 Corinthians 6:9-10, Ephesians 5:5 and Revelation 22:15, which say that people who regularly practice these sins are not Christians; Galatians 1:8-9, which addresses those preaching a false gospel; and Hebrews 10:16-17, which addresses apostasy. All those described in these passages are destined to hell. This is also the case for all sinners who have not repented and sought Christ’s forgiveness.

But for those who have accepted Christ’s offer of forgiveness (Jn. 3:16), their eternal destiny is heaven not hell. Regardless of the seriousness of their sins, the penalty has been paid by the Lord and they can anticipate degrees of reward in heaven rather than punishment in hell (Mt. 16:27; 1 Cor. 3:12-14).

If you have accepted Jesus’ sacrifice for your sins, then all your sins are pardoned, including those in the list of deadly sins, and you are on your way to heaven.