How to read the Bible in chronological order

Apart from flashbacks, it’s best to watch a video or read a story in chronological order from the beginning to the end. Did you know that some of the books of the Bible are not listed in chronological order? The message of the Bible was revealed progressively over a period of about 1,500 years. Some time ago I prepared a calendar to help read the whole Bible in one year, the “Bible in one year calendar”, which was based on the order of the books in our Bibles. Let’s look at the events described in the Bible in the sequence they occurred historically.

The books of most Bibles are arranged according to categories:

As the poets, prophets and letter writers wrote at particular times in history, the events they relate to may be recorded elsewhere in the Bible. A chronological Bible moves these writings nearer to their place in the historical account.

When were they written?

The Old Testament took about 1,000 years to write (1400 BC to 400 BC), whereas the New Testament took about 50 years to write (50AD to 100 AD). The chronological order of the books of the Bible according to when they were written is given below. These estimated dates of writing are based on current scholarship and because of uncertainties, they are often rounded. They give a general indication of when each book was written; it’s impossible to be more precise. Of course some books may have been written over a period of several years.


View this document on Scribd

Three approaches have been used in chronological Bibles to place the recorded events in the order they actually occurred. These are based on the size of the portion of Scripture that is moved:

I have edited my “Bible in one year calendar” by placing the books in chronological order according to the events they describe. It is based on “whole books”, except the book of Job is placed between Genesis 12 and 13. This enables you to read the events in the general order they occurred historically. As this is based on current scholarship, the order differs slightly from the other chronological Bibles available on the internet. Another difference is that two passages are given each day, one from the Old Testament and one from the New Testament–Otherwise you would only be reading from the Old Testament for at least 70% of the year. 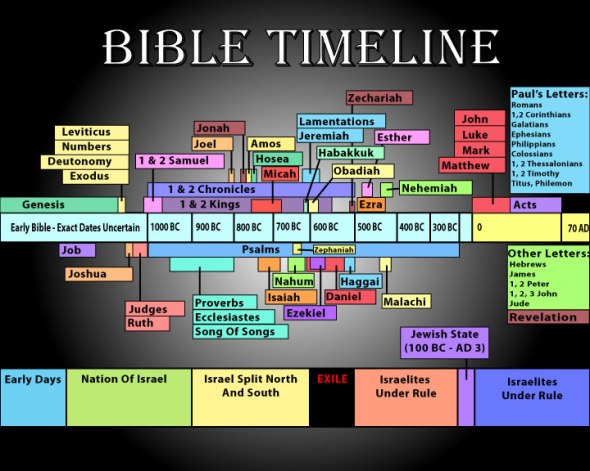 This entry was posted on January 24, 2014 by George Hawke. It was filed under Christian, History and prophecy, Spiritual and was tagged with bible, calendar, chronological, one year, read.