Was Philip transported miraculously after the Ethiopian was baptized? 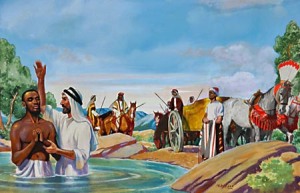 After Philip baptized the Ethiopian treasurer, “When they came up out of the water, the Spirit of the Lord suddenly took Philip away, and the eunuch did not see him again, but went on his way rejoicing. Philip, however, appeared at Azotus and travelled about, preaching the gospel in all the towns until he reached Caesarea” (Acts 8:39-40NIV). Was Philip miraculously transported to Azotus, a town that may have been 30 km away? Luke, the author of Acts, would have heard about this event directly from Philip as he stayed with him in Caesarea (Acts 21:8-9).

What happened to Philip is described by the Greek word harpazo (Strongs #726), which is translated above as “suddenly took”. The other occasion this word is used by Luke is when Paul was in Jerusalem and the Jews accused him of speaking against their religion: “The dispute became so violent that the commander was afraid Paul would be torn to pieces by them. He ordered the troops to go down and take him away from them by force and bring him into the barracks” (Acts 23:10). Here harpazo is translated “take by force”. In both cases someone is suddenly moved away from where they were – it is as though someone has seized them. In the second case it was via means of the troops and in the first case it was via means of the Holy Spirit.

In this brief account we are told that Philip left the Ethiopian suddenly after the baptism at the direction of the Holy Spirit. There is no clear evidence in the text that any other miracle was involved and such a miracle is not necessary to explain what happened. For example, Philip could have been shown that he had to leave the Ethiopian immediately and then travelled by the normal means of transport to Azotus. After all, that’s what happened when Paul was directed by the Holy Spirit to travel to Macedonia instead of to Asia and Bithynia (Acts 16:6-10). In Paul’s case, they “got ready at once to leave for Macedonia”.

Philip’s sudden departure meant that the Ethiopian was unable to thank or reward Philip for his help. Instead of being occupied with the person God used to assist in his conversion, he was occupied with Christ as “he went on his way rejoicing”, which is much more important than Philip’s mode of travel.

This entry was posted on June 29, 2012 by George Hawke. It was filed under Answer, Christian, Spiritual and was tagged with astral travel, baptised, Ethiopian, Holy Spirit, miracle, Philip, teleport, transported.