Why the new covenant is better

Moroccan water sellers carry water in goat skins. This reminds me of the illustration of wine skins. Jesus said, “no one puts new wine into old (inelastic) wineskins. For the old skins would burst from the (fermentation) pressure, spilling the wine and ruining the skins. New wine is stored in new (elastic) wineskins so that both are preserved” (Mt. 9:17NLT). Jesus’ ministry was not a revitalization of Judaism but a new entity – “the law was given through Moses; grace and truth came through Jesus Christ” (Jn, 1:17NIV). Mixing Judaism (the old) and the ministry of Jesus (the new) is like putting new wine into old wineskins. So Jesus taught that the Old Testament laws are not a part of Christianity.

In a previous post I stated that the law of Moses (or the old covenant) is now obsolete and has been replaced because Christians have been “released from the law” (Rom. 7:6NIV). As a commentator disagreed with this viewpoint, I have decided to investigate the relationship between the old covenant and the new covenant in this post.

The law (Exodus to Deuteronomy) was given to the Israelites before they entered the promised land (Ex. 31:13), while the new covenant was promised to them before they were expelled from Judah and it was initially implemented by Jesus Christ (Jer. 31:31-34; 1 Cor. 11:25). The new covenant is an unconditional agreement which God will make with the people of Israel when the Lord Jesus sets up His kingdom on earth. Believers today enjoy some of its blessings, but its complete fulfillment will occur when Israel is restored and redeemed nationally.

When Paul was criticized by men in Corinth who mixed law with grace by teaching Christians that they must observe certain portions of the law of Moses in order to be fully accepted by God, he responded by comparing and contrasting the old and new covenants.

“6 He (God) has made us (apostles) competent as ministers of a new covenant—not of the letter (the law of Moses) but of the Spirit (the gospel); for the letter kills, but the Spirit gives life. 7 Now if the ministry that brought death, which was engraved in letters on stone (the law of Moses), came with glory, so that the Israelites could not look steadily at the face of Moses because of its glory, transitory though it was, 8 will not the ministry of the Spirit be even more glorious? 9 If the ministry that brought condemnation was glorious, how much more glorious is the ministry that brings righteousness! 10 For what was glorious has no glory now in comparison with the surpassing glory. 11 And if what was transitory came with glory, how much greater is the glory of that which lasts!” (2 Cor. 3:6-11).

Paul says that the old (first) covenant (the law) brought:
– Condemnation because of our sin (Rom. 3:20; Gal. 3:10). Under this covenant, blessing was conditional on people’s obedience (with curses and death for disobedience). It was a covenant of works. But because it depended on humanity, and no one could perfectly keep the law, condemnation (and punishment) was inevitable.
– Death (v.6-7) was the penalty for disobedience and all humanity are guilty lawbreakers.
– And it was transitory (v.11), “The letter” (v.6) (the law of Moses), and that which was “engraved in letters on stone” (v. 7) (the ten commandments) was superseded by the new covenant. It was fulfilled in Jesus Christ. Note that this isn’t just the ceremonial laws, but it includes the Sabbath day requirement, which was “engraved in letters on stone”.

This is contrasted with the new covenant (the gospel) which brings:
– Freedom from the condemnation because of our sin (Jn. 8:35, 2 Cor. 3:17). Under this covenant, God promises to bless people through Christ’s sacrificial death. Because it depends on God, the new covenant is able to deliver its promised blessing to those who accept the good news of salvation. It’s a development of the Abrahamic and Davidic covenants, which were both unconditional (Gen. 15:9-21; 2 Sam. 7:5-16).
– Spiritual life (v.6).
– Righteousness (an inward transformation, v.9; 2 Cor. 3:18).
– More glory (v.7-11).
– And it is eternal; “it lasts” (v.11).

Clearly the new covenant is superior to the old one. Only by trusting in Jesus Christ can the condemnation and the sentence of death pronounced by the law on the lawbreaker be annulled and be replaced by the life-giving grace of the new covenant (2 Cor. 3:6, 16-17).

After the writer of Hebrews says that Jesus is greater than a Jewish high priest, he writes,

“6… the ministry Jesus has received is as superior to theirs (Jewish high priests) as the covenant of which He is mediator is superior to the old one, since the new covenant is established on better promises.
7 For if there had been nothing wrong with that first covenant, no place would have been sought for another. 8 But God found fault with the people and said:
“The days are coming, declares the Lord,
when I will make a new covenant
with the people of Israel
and with the people of Judah.
9 It will not be like the covenant
I made with their ancestors
when I took them by the hand
to lead them out of Egypt,
because they did not remain faithful to my covenant,
and I turned away from them,
declares the Lord.
10 This is the covenant I will establish with the people of Israel
after that time, declares the Lord.
I will put my laws in their minds
and write them on their hearts.
I will be their God,
and they will be my people.
11 No longer will they teach their neighbor,
or say to one another, ‘Know the Lord,’
because they will all know me,
from the least of them to the greatest.
12 For I will forgive their wickedness
and will remember their sins no more.”
13 By calling this covenant “new,” He has made the first one obsolete; and what is obsolete and outdated will soon disappear” (Heb. 8:6-13).

And the old covenant is inferior because in the first century:
– It was replaced by the new one (v.7).
– It was “obsolete and outdated” (v.13).
– It “will soon disappear”(v.13).
– It was conditional. It depended on people’s faithfulness, but they were unfaithful (v.8-9).

In his letter to the church in Galatia, Paul illustrates the difference between legalism and grace with the story of Hagar and Sarah. See Genesis 16 and 21 for the original account.

“21 Tell me, you who want to be under the law, are you not aware of what the law says? 22 For it is written that Abraham had two sons, one by the slave woman and the other by the free woman. 23 His son by the slave woman was born according to the flesh, but his son by the free woman was born as the result of a divine promise.
24 These things are being taken figuratively: The women represent two covenants. One covenant is from Mount Sinai and bears children who are to be slaves: This is Hagar. 25 Now Hagar stands for Mount Sinai in Arabia and corresponds to the present city of Jerusalem, because she is in slavery with her children. 26 But the Jerusalem that is above is free, and she is our mother. 27 For it is written:
“Be glad, barren woman,
you who never bore a child;
shout for joy and cry aloud,
you who were never in labor;
because more are the children of the desolate woman than of her who has a husband.”
28 Now you, brothers and sisters, like Isaac, are children of promise. 29 At that time the son born according to the flesh persecuted the son born by the power of the Spirit. It is the same now. 30 But what does Scripture say? “Get rid of the slave woman and her son, for the slave woman’s son will never share in the inheritance with the free woman’s son.” 31 Therefore, brothers and sisters, we are not children of the slave woman, but of the free woman.
1It is for freedom that Christ has set us free. Stand firm, then, and do not let yourselves be burdened again by a yoke of slavery” (Gal. 4:21 – 5:1),

The story had a symbolic application where Hagar represents the old covenant (the law, or legalism) and Sarah the new covenant (the gospel). Paul uses it because he said that legalizers threatened “the freedom we (Christians) have in Christ Jesus and to make us slaves” (Gal. 2:4). He saw a similarity between the freedom of Christianity (the new covenant) compared to the slavery of legalism (introducing parts of the old covenant); and the freedom of Sarah/Isaac compared to the slavery of Hagar/Ishmael.

But the new covenant:
– Liberates and brings freedom (4:22; 5:1). This is freedom from sin being the dominant power in our lives (Rom. 6:15-18) and from the penalty of sin.
– Will be followed by more people that the old one (v.27).
– Its followers shouldn’t go back to the slavery of legalism (5:1).
– Its followers should separate from legalism and not tolerate it in the local church (v.30).

It’s obvious from these passages of Scripture that the new covenant is superior to the old one. But is the law of Moses (or the old covenant) now obsolete and has it been replaced? The answer seems to be yes (for Christians) and no (for non-Christians).

For Christians, the old covenant (including the Sabbath day) is obsolete and has been superseded by the new one because it was fulfilled in Jesus Christ. So the teaching that believers must keep the Sabbath day is contrary to Scripture, which is consistent with “do not let anyone judge you by what you eat or drink, or with regard to a religious festival, a New Moon celebration or a Sabbath day. These are a shadow of the things that were to come; the reality, however, is found in Christ” (Col. 2:16-17). So the Sabbath day symbolized the type of eternal rest to be enjoyed by all who would believe on the Lord Jesus Christ (Heb. 4:3a, 9). But now that Jesus has come, the symbol is obsolete because it has been fulfilled.

However, the ministry of the law to unsaved people hasn’t ended: “the law is good if one uses it properly” (1 Tim. 1:8). The proper use of the law of Moses is to produce the knowledge of sin and so lead to repentance – the law was designed to show people their sinfulness (Rom. 3:20b; 5:20; 7:7). But as the Sabbath day law isn’t to be practiced by believers today, it can’t produce the knowledge of sin in unbelievers and so lead to repentance – “the law is made not for the righteous” (1 Tim. 1:9). In this respect, it is unique in the ten commandments. This is a consequence of the Sabbath day command not being repeated in the portion of the New Testament that’s addressed to the church. 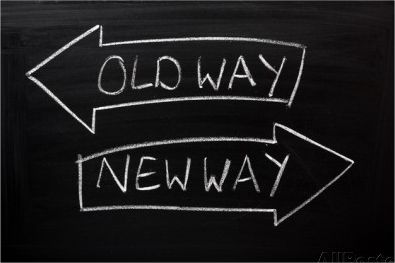 Also see: What about keeping the Sabbath day?
What does the New Testament say about the Sabbath?
I’ve been told that Christians should keep the ten commandments as they were God’s law and not the law of Moses.  Is this true?
The Sabbath day difference between Jesus and Paul
I went to a church service that was held on Saturday instead of Sunday and was told that was when we should worship God. What dos the Bible say on this topic?
Is insistence on Sabbath-keeping legalism?

This entry was posted on November 16, 2016 by George Hawke. It was filed under Christian, Christian living, Spiritual and was tagged with agreeement, covenant, hagar, law, Moses, new, obsolete, old, replaced, Sabbath, sarah.