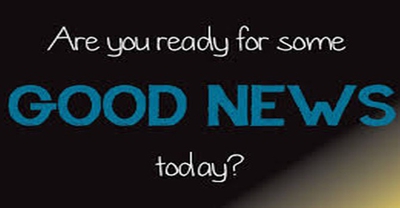 The news in the daily news media is usually bad news. It’s often about disasters and tragedies like accidents, fires, floods, earthquakes and tsunamis. Fortunately in a world where bad news dominates, God has given us good news.

When Paul wrote to the Christians at Corinth, he addressed those who denied the possibility of the resurrection of the body after death. He corrected them by saying that Jesus died and was resurrected: “For what I received I passed on to you as of first importance: that Christ died for our sins according to the Scriptures, that He was buried, that He was raised on the third day according to the Scriptures” (1 Cor. 15:3-4).

And because Christ lived and died, we can infer that He was also born (the incarnation). The reason He came to earth was because humanity was separated from God and under God’s judgment. This problem was caused because people rebelled against the God who made them in the beginning.

Paul said, “Christ died for our sins”. He died to pay the penalty that our sins deserved. After Jesus was raised back to life He ascended back to heaven. And He promised to return and resurrect all those who believed that He died for their sins.

Putting all this together we have God’s good news story. Paul says it’s the most important news for us to know.

God made a perfect world. But people rebelled against their Maker and came under His judgment. Since then they suffer from broken relationships, they put other people down, they lack peace, and they are enslaved to their idols. So God sent Jesus to pay the penalty that our sins deserved. Jesus died, was buried and rose back to life in a resurrected body. He ascended back to heaven and has promised to return and resurrect those who have trusted in Him and take them to heaven. God’s followers are reconciled with God, delivered from their sinful ways, adopted into His family, find their identity and freedom in Jesus Christ, and have peace with God. Jesus is the hero in this historical story. He is the person we are to know, love and worship.

In our celebrations, let’s not forget to remember and celebrate God’s good news.

Appendix: Other biblical summaries of the Christian gospel

“Beyond all question, the mystery from which true godliness springs is great: He [Jesus Christ] appeared in the flesh, was vindicated by the Spirit, was seen by angels, was preached among the nations, was believed on in the world, was taken up in glory” (1 Tim. 3:16).

“Christ also suffered once for sins, the righteous for the unrighteous, to bring you to God. He was put to death in the body but made alive in the Spirit” (1 Pt. 3:18).

“Christ was sacrificed once to take away the sins of many; and He will appear a second time, not to bear sin, but to bring salvation to those who are waiting for Him” (Heb. 9:28).

This entry was posted on December 30, 2018 by George Hawke. It was filed under Christian, Gospel, Spiritual and was tagged with bad news, freedom, good-news, identity, Jesus, peace, reconciliation, story.