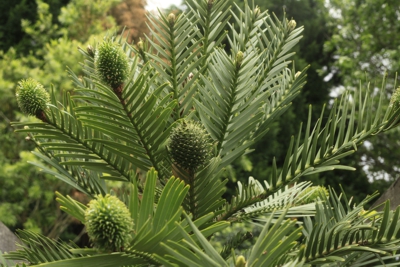 In 1994 an experienced bushwalker and rock climber abseiled into a remote gorge in Wollemi National Park, west of Sydney and found himself in a narrow canyon. He realized that the trees growing along the creek were unusual. The large, glossy evergreen trees had bark that peeled from young stems in red-brown scales and the older bark resembled bubbling chocolate (or coco puffs). Male and female cones were found at the tips of branches on the trees, with a majority of the female cones at the top of the trees.

They proved to be a tree new to science and, prior to this discovery of living trees, the genus was known only from fossils. The Wollemi pine (Wollemia nobilis) belongs to the ancient conifer family Araucariaceae. The other two genera in this family are the Araucaria (that includes the bunya, hoop pine, monkey puzzle tree and Norfolk Island pine) and the Agathis (that includes the kauri). The Wollemi pine has some structural characteristics of the Araucaria and the Agathis, but it also has some unique features. The genus is thought to be about 100 million years old under the uniformitarian (geologic) time scale. So prior to this discovery, these pines were thought to be extinct for millions of years.

The Wollemi pine is considered to be critically endangered because fewer than 100 mature trees are known to exist in the wild. In 2014, 200 advanced Wollemi Pine seedlings were planted in a location in the Blue Mountains where conditions are close to that of the existing wild population as an ‘insurance colony’.

One of the problems identifying Wollemi pine leaves in the fossil record is that they are similar to Araucaria and Agathis leaves. Several macrofossils (large enough to be identified without the use of a microscope) from the 100 million years old (geologic time scale) Winton formation in western Queensland provide close matches for parts of the Wollemi pine (Meagher and Offord, 2006).

Wollemi pines produce many small, durable pollen grains that are widely dispersed and better represented in the fossil record than other plant parts. But the pollen of the Wollemia and the Agathis are easily mistaken. The Wollemia pollen is similar to the fossilized pollen known as Dilwynites, which has been observed in Australia in sediments dated at 2-90 million years ago (geologic time scale). Dilwynites have been observed in Australia, New Zealand, South America and Antarctica. These Dilwynites are usually assumed to have come from Wollemi pines.

The most common coniferous plant fossils found at Talbragar in NSW were the genus Agathis, which is closely related to the Wollemi pine. These are found in late Jurassic rock strata, which is about 150 million years old under the geologic time scale. Talbragar is 100 km (62 miles) away from the living Wollemi pines.

Consequently, Wollemi pines are known as ‘living fossils’. ‘Living fossils’ are living plants and animals that look similar to fossilized organisms. When something that scientists thought became extinct millions of years ago is found alive, it’s called a ‘living fossil’ (Appendix A).

Scientists assume that the Wollemi pine lived on earth millions of years ago, after which there is no evidence of them until they were discovered in 1994. That’s amazing! How can something disappear for at least 2 million years without a trace in rock strata, which under the uniformitarian (geologic) time scale is assumed to represent life on earth over millions of years? 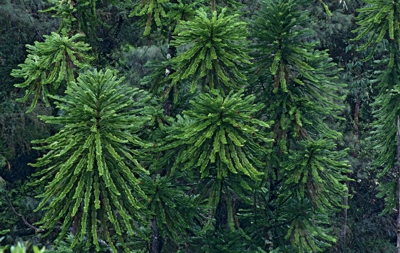 Under the biblical explanation of geologic history (see Appendix B), the fossil pines (and other vegetation) were buried during the global flood about 4.5k years ago. This is consistent with fish being fossilized with Agathis pine trees at Talbragar. And lungfish, turtles and the bony fish, Cladocyclus were found with dinosaurs and vegetation at Winton. Runoff after the flood eroded the canyons where the Wollemi pine live today and the trees re-sprouted after the catastrophe. Being located in a canyon, they were protected from the hot dry winds that can occur in Central NSW. So the Wollemi pine is a survivor of the flood that buried its relatives who didn’t survive the disaster and are now extinct. And the time difference between the fossil ancestors and the living trees is only thousands of years and not millions of years.

Genetic testing has revealed that all the Wollemi pine specimens are genetically indistinguishable, suggesting that the species has been through a genetic bottleneck in which its population became so low (possibly just one or two individuals) that all genetic variability was lost. This is consistent with the global flood when most species of plants and animals went through a genetic bottleneck.

The Wollemi pine, which originally grew in a moist climate in ancient times, has survived in a drier climate to be still alive today. Which explanation is more likely to be true? Either the pine survived and left no trace over millions of years when fossilization was occurring, or the pine survived and left no trace over thousands of years when fossilization wasn’t occurring. Obviously, the latter is more likely. This means that the biblical timescale gives a more realistic explanation of ‘living fossils’ like the Wollemi pine than the uniformitarian (geologic) time scale.

The Wollemi Pine is one of many ‘living fossils’ which are thought to have lived ‘millions of years ago’, yet are alive today, essentially unchanged despite all that ‘evolutionary time’. ‘Living fossils’ are organisms found preserved in the fossil record, which still exist in similar form today. They are durable or persistent species.

The term ‘living fossil’ implies stasis (staying much the same). Biological stasis is a period of stability when there is little or no evolutionary change in a species. ‘Living fossil’ has been used to describe organisms that were discovered after they were thought to be extinct (like the Coelacanth fish, the Laotian rock rat, and the Wollemi pine) and to describe organisms that were not thought to be extinct (like the Cyanobacteria, Ctenophores, Stromatolites, Scorpions, Dragonflies, Jellyfish, Elephant Sharks, Crocodiles, Horseshoe crabs, Fig wasps, Gingko trees, Cycads, Nautilus mollusks, the tuatara lizard, Salamanders, and Seapens). But many ‘living fossils’ are not recognized because paleontologists tend to give the fossil forms quite different names to the living ones.

In general, fossils are either creatures that are now extinct (like dinosaurs) or they are similar to creatures that live today (like ‘living fossils’). This means that fossils show the extinction (expiry or termination) of living things or the stasis (staying much the same) of living things, and not gradual biological evolution. So paleontology doesn’t support the idea of biological evolution. Biological change like Darwin expected is not found in the fossil record.

And fossils persistently show lack of change (stasis). Many of today’s organisms can be found as almost identical to fossils throughout the rock layers. In fact, virtually every kind of organism alive today is a ‘living fossil’. Dr Carl Werner (2009) found representative examples from all of the major animal phyla living today and all of the major plant divisions living today in dinosaur rock layers (Triassic, Jurassic and Cretaceous). This included mammals and birds, who are often assumed to have evolved from reptiles. The modern birds that had been found in Cretaceous layers included: parrots, penguins, owls, sandpipers, albatross, flamingos, loons, ducks, cormorants and avocets. However this fact is not mentioned in museums because it’s inconsistent with the theory of biological evolution.

The Wollemi pine is called a ‘living fossil’ because before it was discovered it was thought to be extinct. We have seen that the biblical time scale gives a more realistic explanation of the survival of the Wollemi pine and its absence from intervening rock layers than the uniformitarian (geologic) time scale.

This means that ‘living fossils’ provide another reason (besides coastal geomorphology, fossilization of large animals and orally-transmitted Aboriginal stories) to be skeptical of the uniformitarian (geologic) time scale.

Appendix A: Definition of ‘living fossils’

Charles Darwin first used the phrase “living fossils” in the Origin of Species to describe life forms that look essentially the same today as their fossil versions, even though their fossils are absent from intervening rock layers.

A 1984 report that studied the use of ‘living fossil’ in technical literature found that researchers almost always used the phrase to describe a living form that:

According to The American Heritage Dictionary of the English Language: ‘Living fossils’ means, “An organism, such as the coelacanth or ginkgo, that is similar in appearance to its fossilized distant ancestors and usually has no extant close relatives”.

And, ‘living fossils’ means:
1. Any species discovered first as a fossil and believed extinct, but which is later found living; an organism that has remained unchanged over geological periods. For example, the coelacanth and the dawn redwood are ‘living fossils’.
2. Any living species which very closely resembles fossil relatives in most anatomical details. For example, Crocodiles are ‘living fossils’ that haven’t changed their appearance much in millions of years (according to the geological time scale).

The earth’s geological and climatological history has determined the current geomorphological and geological structure of the earth. At present there are two main explanations of the earth’s geological and climatological history. One (Biblical) is based on recorded history in the Bible and the other (Uniformitarian) is based on assuming that the present (processes today) is the key to the past (ancient processes) and on the hypothetical geologic time scale. The biblical explanation allows for catastrophic events (such as the flood of Noah), whereas the Uniformitarian explanation minimizes the role of catastrophic events (because it has a preference for gradual events). The biblical explanation mainly involves rapid processes over short periods of time, whereas the Uniformitarian explanation mainly involves slow processes over long periods of time.

Biblical explanation – The global flood about 4.5k years ago and associated tectonic activity and volcanism produced enormously thick sequences of sedimentary rocks over a short period of time. Fossils represent the order of burial during the flood. The flood was followed by an ice age during which there were volcanic and glacial impacts.

Uniformitarian explanation – Sea levels changed gradually over millions of years to produce the enormously thick sequences of sedimentary rocks that record the long history of geological time. Fossils represent the biological evolution of species. There were multiple ice ages over millions of years. The most recent ice age ended about 10k years ago.

Also see: Lots of limestone
Heads I win, tails you lose
London bridge has fallen down
Soft tissue in dinosaur bones
Six reasons to be skeptical of the geologic time scale