Many people are living dangerously today and they are oblivious to the massive risk they are taking! 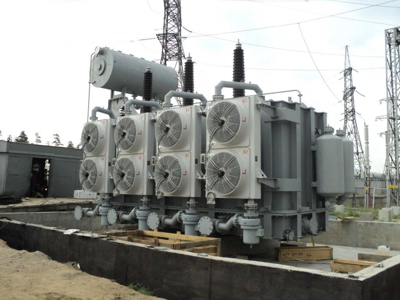 Electrical substations have oil-filled transformers. A catastrophic failure can cause the loss of large amounts of oil from the transformers and can cause a fire and damage containment bunds resulting in soil and water contamination. Major power supply substations usually have two levels of pollution control for oil spills. The first level (or primary containment) is a bund (or retaining wall) which can contain any spillage. The second level (or secondary containment) is a backup if the first level fails. This can be another bund or an overflow area (like a dam). Two levels of containment is deemed to be sufficient to prevent the pollution of the soil or waterways where there is a significant risk of spillage of hazardous liquids. When these two levels of containment are in place, there is little risk of a spillage having an impact on the surrounding environment. This is an acceptable industrial risk.

For reliability, structures are typically built stronger than necessary. This is in case a structure experiences a heavier-than-expected load. In structural engineering, the factor of safety (FOS) is the designed load-bearing capacity of a structure or component. The FOS is the failure load divided by the allowable load. For example, the FOS of wire ropes is typically 8-9 and for structural steel work in bridges is typically 5-7. 43 people died in August 2018 when a 210-metre (690 ft) section of Morandi Bridge in Genoa (Italy) collapsed during a rainstorm plunging more than 30 vehicles and chunks of concrete and twisted metal to the ground 50 meters below. The bridge was cable-stayed with a prestressed concrete structure for the piers, pylons and deck. In this case it appears that corrosion reduced the actual FOS to below 1. 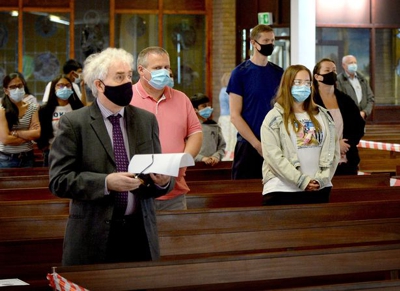 When I attend church there are at least four (4) levels of control in place to stop the spread of COVID-19! These are:
– You have to be doubly vaccinated against COVID-19.
– You have to wear a face mask inside the building.
– You have to physically distance (there should be no more than one person per 4 square meters of area inside the building and one person per 2 square meters of area outside the building).
– Singing is prohibited.
And in addition to these mandatory requirements, you have to login on the COVID-19 smartphone app to enable contact tracing. This is an example of how governments have used severe and excessive measures to address the COVID pandemic. In this case the factor of safety is at least 4.

Washing hands with soap and water or an alcohol-based hand sanitizer is also recommended.

What could go wrong? I could forget to follow one of these controls. What would be the consequence of this happening? It would be “minor” and insignificant because there would be three other controls in place. In fact, you could disregard two of these controls and still be as safe as a major oil-filled electrical transformer in a thunderstorm! So, my risk of catching COVID-19 at church with all these control measures in place is virtually zero!

Did you know that there is a risk that is much greater than getting COVID-19? It’s a spiritual danger. What could go wrong? You could carry on as though God doesn’t exist, but then face Him in the future and His judgment. The Bible says, “people are destined to die once, and after that to face [God’s] judgment” (Heb. 9:27NIV). What would be the consequence of this happening? It would be “major” because this is the worst fate possible – the horrifying reality of what happens to those who ignore or reject the God who made the universe. After death there is either judgment (eternal separation from God) or salvation (eternal life with God). After a person’s death, their eternal destiny is eternally fixed. This is a big issue dealing with eternal things.

What is the likelihood of this happening? Because there is strong evidence for the existence of God, and God’s judgment is mentioned in the Bible, it is “possible”. What is the risk level? A “possible” likelihood and a “major” consequence give a “high” risk level. So, unbelievers (living as though God doesn’t exist) are taking a massive risk, which should be intolerable and unacceptable, but many tolerate and accept it. They are living dangerously.

In contrast, a Christian is not taking a massive risk. What could go wrong? You could live as though God exists, but then find out in future that He doesn’t exist. What would be the consequence of this happening? It would be “minor” because everyone would share the same fate and there would be no heaven or hell. What is the likelihood of this happening? This depends on your viewpoint. A believer would say it is “unlikely”, whereas an unbeliever would say it is “possible”. What is the risk level? A “possible” or “unlikely” likelihood and a “minor” consequence give a “low” risk level, which is tolerable. So, in contrast to unbelievers, Christians are not taking a massive risk. This finding is similar to Pascal’s Wager (Appendix).

The fight-or-flight response prepares the body to either fight or flee when faced with stress or danger. It’s a survival instinct that allows you to act quickly so you can protect yourself. When you’re faced with a perceived threat, your brain thinks you’re in danger and causes fear. The greater the threat (danger), the greater the fear.

A phobia is when the response is falsely triggered in the face of a perceived threat. If the response is severe, it can lead to a panic attack. Depression, anxiety, and high levels of stress can cause a false fight-or-flight response. And a hypochondriac gets anxious over tiny symptoms because it could possibly indicate a life-threatening disease. These are examples of too-much fear. The fear is excessive compared to the danger.

The opposite reaction is to have too-little fear. Lemmings is an old puzzle–strategy video game in which the player must save a certain percentage of small humanoid creatures as they march heedlessly through a dangerous environment. Another example is those who ignore or reject God, and risk facing His judgment in a coming day.

Are you living dangerously? Do you fear COVID-19 more than you fear the God who made the universe and sent Jesus to take the punishment we deserve for rebelling against Him? Are you only focusing on the present and ignoring the eternal future?

Jesus said, “Very truly I tell you, whoever hears my word and believes Him [God] who sent me has eternal life and will not be judged but has crossed over from death to life” (Jn 5:24). This eternal life lasts forever.

After all, our soul is more important than anything else. A person will gain nothing if they gain the whole world but lose their soul (Mt. 16:26). To gain the whole world is to receive all the world has to offer—money, fame, pleasure, power, prestige, etc. To lose one’s soul is to die without a right relationship with Christ and spend an eternity in hell. If a person rejects Jesus and becomes the richest, most powerful person on earth, they have made a poor decision. Sooner or later, earthly things will fade away. And they will have lost the only part of themselves that lasts forever. 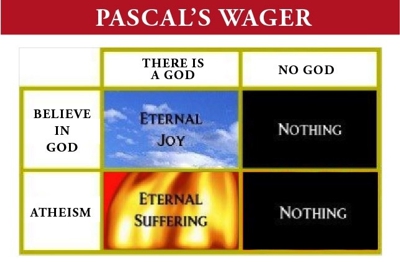 Blaise Pascal (1623-1662) was a French mathematician, physicist, inventor, philosopher, writer and Catholic theologian. Pascal’s Wager is the name given to an argument he developed for taking steps to believe in God. He thought that one cannot come to the knowledge of God’s existence through reason alone, so the wise thing to do is to live your life as if God does exist because such a life has everything to gain and nothing to lose. If we live as though God exists, and He does indeed exist, we have gained heaven. If He doesn’t exist, we have lost nothing. If, on the other hand, we live as though God does not exist and He really does exist, we have gained hell and punishment and have lost heaven and bliss. If one weighs the options, clearly the rational choice to live as if God exists is the better of the possible choices. So believers have nothing to lose and everything to gain, while unbelievers have everything to lose and nothing to gain.

The Wager can be summarized in a Decision Matrix which shows that as long as the probability that God exists is greater than zero, belief in the God of the Bible has significantly more benefits than unbelief does.

But the Bible says that reason alone can bring us to the knowledge of God’s existence (Rom. 1:19-20). This makes us accountable and liable to God’s judgment.

The Wager misrepresents the depravity of human nature. Unbelievers cannot be persuaded to a saving faith in Jesus Christ by a cost-benefit analysis.

The Wager seems focused on a risk/reward outlook, which is not consistent to a true saving faith relationship in Christ. Jesus placed obedience to His commands as an evidence of love for Christ (Jn. 14:23).

The information on “Pascal’s Wager” came from the “Got Questions” website.

This entry was posted on November 5, 2021 by George Hawke. It was filed under Christian, Gospel, Spiritual and was tagged with bund, Church, COVID, COVID-19, danger, Pascal, Pascale's Wager, risk, risk assessment, transformer.