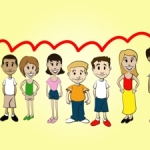 A message can become unreliable if it passes through many intermediate speakers between the original speaker and the final listener. This is demonstrated in the telephone (Chinese whispers) game in which one person whispers a message to the ear of the next person through a line of people until the last player announces the message to the entire group. What usually happens is that the statement announced by the last player differs significantly from that of the first player. Obviously, if a message (or story) has been retold by many people, some of it can change if people forget parts of what they are told. END_OF_DOCUMENT_TOKEN_TO_BE_REPLACED

For example, Australian researchers have investigated Aboriginal stories describing times when sea levels were lower than today (Reid et al, 2014). The orally-transmitted Aboriginal stories were written down after Europeans arrived in Australia in 1788. The stories describe coastal flooding which the researchers identify with the rise in sea level since the last ice age to its present level about 7,000 years ago on the geologic time scale (Appendix A). See Appendix B for the equivalent biblical dates. The team analyzed the contours of the land where the stories were told and used reconstructions of prehistoric sea levels to date the origins of each of the stories. They claim that these stories can be 10,000 years old which represents accurate oral transmission across 400 generations. Nunn and Reid (2015) expanded their analysis to 21 stories about coastal drowning that in most cases was considered likely to recall the effects of postglacial sea-level rise more than 7,000 years ago. They also noted that “no Aboriginal stories are known that talk of the sea level falling and exposing coastal lands”. END_OF_DOCUMENT_TOKEN_TO_BE_REPLACED