A time line for the book of Acts

The book of Acts in the Bible describes the first 30 years of the church. It’s an historical narrative that was written by Luke who was a companion of Paul (Col. 4:10-14; 2 Tim. 4:11; Phile. 24). He wrote it to educate Christians about the early church.

The main point of Acts is that God’s witnesses spread the gospel message and established churches. 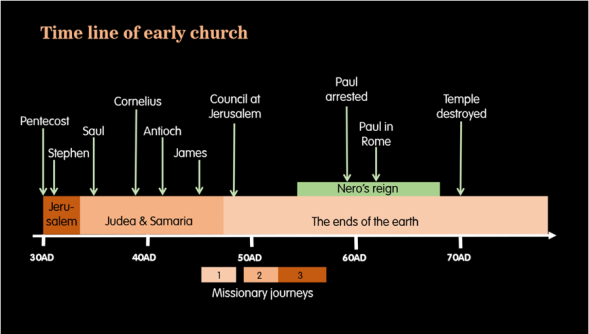 Jesus told Peter [stone], “on this rock [massive rock – Jesus; 1 Cor. 10:4] I will build my church, and the gates of Hades [hell, or the power of death] will not overcome it” (Mt. 16:18). The building of the foundation of the church is described in the book of Acts in the Bible as follows.

Jesus taught His disciples for 40 days after His resurrection. He told them to wait in Jerusalem until they would be empowered by the Holy Spirit to witness about Jesus across the known world. After this He ascended back to heaven.

Because Judas Iscariot suicided, he was replaced as apostle by Matthias.

On the day of Pentecost (10 days after the ascension), the Holy Spirit miraculously came to live within the 120 Jewish followers of Jesus and they praised God in other languages. This drew a large crowd and Peter preached showing how Jesus was the promised Messiah. 3,000 people believed his message. This was the beginning of the church. They met regularly for teaching, fellowship, breaking of bread and prayer.

Like Jesus, the apostles did healing miracles and Peter preached to the Jews. Thousands of them decided to follow Jesus. But the apostles were opposed and persecuted by the Jewish religious leaders. Two believers died because they lied to Peter.

The apostles appointed seven men to oversee the distribution of food to the poor. Stephen was stoned for his faith in Christ and the church was persecuted and scattered.

Philip was the first missionary in Judea and Samaria. The Pharisee Saul (whose Roman name was Paul, Acts 13:9) had a dramatic conversion and started preaching about Jesus instead of persecuting Christians.

Peter preached in Judea and Samaria. He was given a vision to show him that the gospel was going out to Gentiles as well as Jews. And when they decided to follow Jesus, the Gentile household of Cornelius received the Holy Spirit (like on the day of Pentecost). Later a meeting was held at Jerusalem to decide whether the Gentile believers had to keep the law of Moses like Jews. They agreed that it was God’s will that the church was for all nationalities and not just Jews.

James was put to death and Peter was imprisoned but was miraculously released.

Then Paul went on three missionary journeys to establish churches in what is now Turkey and Greece. After this he was imprisoned and transported to Rome. So the gospel travelled 4,000 km (2,500 miles) from Jerusalem to Rome. From the locked upper room to the palace of Caesar. This progress was both geographic and ethnic.

So Acts is about how God the Holy Spirit took the gospel from Jerusalem to Rome, the capital of their world. It shows what God can do through individuals and churches who are fully committed to Him and empowered by the Holy Spirit.

This entry was posted on March 21, 2021 by George Hawke. It was filed under Christian, History and prophecy, Spiritual and was tagged with Acts, apostles, bible, Church, early, outline, Paul, Peter, summary, time line.