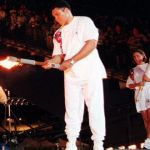 After beating Sonny Liston in 1964 to become the world heavyweight boxing champion, Clay boasted, “I am the greatest!” Then he changed his name to Muhammed Ali. Ali dominated boxing in the 1960s and 1970s and held the heavyweight title three times. His fights were among the most memorable and spectacular in history, but he quickly became at least as well known for his colorful personality and his showy antics in the ring.

“Float like a butterfly, sting like a bee,” was one of many phrases Ali used to describe what he could do in the ring, while “I am the greatest” was a common catchcry. He was a charismatic boxer with a flair for showmanship. His courage inside and outside the ring and his verbal taunting of opponents were legendary, as were his commitment to justice and his efforts for the sick and underprivileged.

Muhammad Ali was an entertainer. He leaves behind a legacy of thrilling fights, trash talk poetry and taking a stand against racism, inequality and war.

Bill Clinton praised his stunning gifts: his strength and speed in the ring, his wit and way with words and managing the public and his mind and heart. And he said that Ali was smart.

Although Ali received many accolades, he wasn’t the greatest man to have lived. Here’s what the Bible says about Jesus Christ.

“Christ is the visible image of the invisible God.
He existed before anything was created and is supreme over all creation, for through Him God created everything in the heavenly realms and on earth.
He made the things we can see and the things we can’t see—such as thrones, kingdoms, rulers, and authorities in the unseen world.
Everything was created through Him and for Him.
He existed before anything else, and He holds all creation together.
Christ is also the head of the church, which is His body.
He is the beginning, supreme over all who rise from the dead.
So He is first in everything.
For God in all His fullness was pleased to live in Christ, and through Him God reconciled everything to Himself.
He made peace with everything in heaven and on earth by means of Christ’s blood on the cross” (Col. 1:15-20NLT).

Because He is “first in everything” and “supreme over all creation”, Jesus Christ is indeed “The Greatest!”. He is supreme in creation (He created everything and holds it all together) and in redemption (He died to enable us to be reconciled and have peace with God).

Jesus Christ is not only supreme in the physical world, but also in the spiritual world. He’s the source of spiritual life, the first to be resurrected with a glorified body and the leader of a new creation.

So, Jesus is supreme and unique in greatness.

Although Ali was called “A man of faith” who was “deeply religious and spiritual”, he wasn’t spiritually smart. Everyone has some kind of faith, but it’s what we are trusting in that counts. At his Muslim funeral service (jenazah), there were prayers for his sins to be forgiven, for him to be “surrounded by light”, and for him to be accepted into heaven. Unfortunately, it’s too late to pray for these after someone’s death. These are matters to be decided during one’s life, not afterwards. It seems that Ali rejected the strong spiritual foundation of the Bible which he knew about as a youth and accepted a weaker one instead.

Although Muhammad Ali was a great boxer, his achievements are insignificant compared to those of Jesus Christ. While, Ali’s body rests in Cave Hill Cemetery, Jesus sits at the right hand of God. Ali was praised in eulogy, but Jesus Christ will be praised universally: “To Him … be praise and honor and glory and power, for ever and ever!” (Rev. 5:13). Over time Ali will be forgotten, but Jesus will be praised eternally.

Let’s be spiritually smart and trust in Jesus Christ. He’s the greatest of all, not Muhammad Ali.

The theme of the book of Romans is the good news (gospel) that God has intervened in our history so that through faith in Christ’s sacrificial death we can be reconciled with God. It describes the universal need for this reconciliation (Rom. 1:18 – 3:20), how it can be obtained through faith in Christ (3:21-31), an example of similar faith in Old Testament times (4:1-25), and the benefits of such faith (5:1-11). Then the good news is summarized by contrasting Adam and Jesus (5:12-21), which is followed by a description of the process by which believers grow to maturity (sanctification) (6:1-23).

The state and destiny of humanity is pictured in two men: Adam and Jesus. Adam trespassed by disobeying God (when he ate from the tree of the knowledge of good and evil). This resulted in humanity becoming sinful and God’s punishment was the death penalty (physical death and eternal spiritual death). That’s why people die. On the other hand, Jesus obeyed God (when He allowed men to execute Him). This resulted in humanity being freely offered to have the penalty of eternal spiritual death cancelled and replaced with eternal life. So Adam is the source of all our problems, suffering, pain, and God’s judgment; while Jesus is the source of our reconciliation with God and the promises this brings. Adam brought death and Christ brought life.

The major difference between Adam and Christ was their disobedience and obedience to God. This has a dramatic impact on our world and our destiny.

Adam and Jesus were both unique. Adam was the first man. Jesus was both human (a man) and divine (the Son of God). They were similar as men, but different because Adam wasn’t divine. They were also similar in that a single act (Adam eating the fruit and Jesus dying) impacted all humanity.

Romans 5:12-21 teaches that Adam is the leader of sinful humanity.
“just as sin entered the world through one man (Adam), and death through sin, and in this way death came to all people (everyone), because all sinned” (5:12NIV).
“death reigned from the time of Adam to the time of Moses, even over those who did not sin by breaking a command, as did Adam” (5:14)
“many (everyone) died by the trespass of the one man (Adam)” (5:15).
“the result of one man’s (Adam’s) sin: The judgment followed one sin and brought condemnation” (5:16).
“by the trespass of the one man (Adam), death reigned through that one man” (5:17).
“one trespass (Adam’s) resulted in condemnation for all people (everyone)” (5:18).
“through the disobedience of the one man (Adam) the many (everyone) were made sinners” (5:19).
“sin reigned in death” (5:21).

As a result of Adam’s disobedience, sin and death passed to all his descendants. Through Adam’s sin all were condemned as sinners. Death is the penalty for sin. Death shows our sinfulness. The proof that Adam’s sin affected the entire human race is that death is universal. So because of Adam all people are sinful in their nature and in their behavior. Adam’s sin altered our human nature so that it’s corrupt and rebellious. That’s the condition of humanity for you, me and everyone else. We’re habitual sinners because of Adam’s original sin. It’s the greatest problem of the human race and it’s the source of the evil in our world. That’s why the world is as it is.

This passage also teaches that Jesus Christ is the leader of forgiven humanity.
“how much more did God’s grace and the gift that came by the grace of the one man, Jesus Christ, overflow to the many (believers)!” (5:15).
“the gift of God … the gift (of Christ’s righteousness, v.17) followed many trespasses and brought justification (to believers)” (5:16).
“how much more will those who receive God’s abundant provision of grace and of the gift of righteousness (believers) reign in life through the one man, Jesus Christ!” (5:17).
“one righteous act (Christ’s) resulted in justification and life for all people (believers)” (5:18).
“through the obedience of the one man (Christ) the many (believers) will be made righteous” (5:19).
“grace might reign through righteousness to bring eternal life through Jesus Christ our Lord” (5:21).

Clearly Christ’s gift of salvation is superior to Adam’s sin and the judgment we deserve. It’s “much more” (5:15, 17) and is sufficient for “many trespasses” (5:16) because Christ takes our judgement and we are seen in His righteousness. Instead of being ruled by death, in a coming day we will reign with Christ (5:17; Rev. 3:21). While Adam brought eternal death, Christ brings eternal life (1 Cor. 13:19-23).

Paul also says that Adam “is a pattern of the one to come (Jesus)” (5:14). How is Jesus like Adam? He explains this:
“Adam’s one sin brings condemnation for everyone, but Christ’s one act of righteousness brings a right relationship with God and new life for everyone. Because one person disobeyed God (Adam), many became sinners. But because one other person (Christ) obeyed God, many (believers) will be made righteous” (5:18-19NLT).

Adam and Jesus had a great influence on the human race. Adam is the leader of sinful humanity and Christ the leader of forgiven humanity. But Christ’s gift is greater than Adam’s sin.

The universal problem of the human race is sin and the universal solution is the gospel. All people, no matter what they have done, can get right with God because of Christ’s obedience and His righteousness. That’s the most important thing that we can do. But like any gift, it belongs only to those who accept it. Only those who by faith receive God’s gift of justification will enjoy the benefits of Christ’s obedience (5:17). Our eternal destiny depends on which humanity we choose: that of Adam or that of Christ.

Because of our humanity, we all begin life “in Adam”. A Christian changes their allegiance from Adam to Jesus. This means they are positioned “in Christ”. If we are in Christ, our salvation is secure not because of anything in us, but because we’re in Him.

Christians have accepted Christ’s gift, but they are still influenced by Adam’s sin. They have a new identity in Christ and an old identity in Adam. Whether our new identity is shown in our everyday life depends on whether we obey God’s instructions for us in the parts of the Bible written to the church (Acts to Revelation). Do we live like Adam (who disobeyed God) or like Jesus (who obeyed God)? Let’s be like Paul and follow the example of Christ (1 Cor. 11:1).