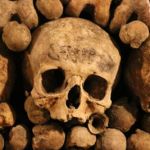 Recently I’ve visited limestone caves in Maastricht (in the Netherlands) and Paris (in France). These are man-made tunnels and underground caverns where the rock was mined centuries ago for building purposes.

The North Caves tunnel goes deep below the St Pietersberg hill (Saint Peter’s Mount) at Maastricht. The network of thousands of tunnels is over 80 km (50 miles) long and includes charcoal drawings and inscriptions on the walls. Miners started excavating the mountain some 1,000 years ago, and in recent years open-cut mining has been used as well. This yellowish limestone was used in the Netherlands and Belgium as a traditional building material from the Middle Ages to the Renaissance.

These caves were used as a refuge in wars and when Maastricht was under siege. During World War II, 780 paintings, including Rembrandt’s “Night Watch”, were kept safe in the caves for three years. And the tunnels were used to smuggle Jews to safety during this period. END_OF_DOCUMENT_TOKEN_TO_BE_REPLACED