Jesus is better than Santa 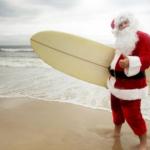 Both Jesus Christ and Santa Claus feature in many Christmas celebrations. Everyone likes Santa because he is jolly man who brings gifts to children around the world. But why is Jesus better than Santa?

Four separate eyewitness biographies are given of Jesus in the Bible by Matthew, Mark, Luke and John. Three of these were written about 30 years after most of the events they describe. And the first-century Jewish historian Josephus called James “the brother of Jesus, who was called Christ”. These historical records confirm that Jesus was a man who lived in Israel between about 5 BC and AD 30. He was an historical character and not a mythical figure.

Santa Claus is based on Saint Nicholas, a fourth century Christian bishop, who was known for his generosity and kindness. Saint Nicholas lived in Myra in Asia Minor (now called Turkey). There are many legends about him, but we don’t know if any of them are true! He is said to have used his inheritance to help the poor and sick, giving secret gifts to people who needed them. In particular there are stories about helping three poor sisters and saving three men from death. Because of his kindness Nicholas was made a saint and he was a popular saint in Europe until the Reformation in the 1550s. After this time, the Dutch continued to celebrate the feast day of St Nicholas on 6th December when children put out their shoes the night before and the next morning they would discover gifts left by St Nicholas. In the 19th century this story was transformed to Santa Claus leaving gifts at Christmas time. He was now described as a jolly, heavy man wearing a red suit with white fur trim who comes down the chimney to leave presents for deserving children and drives a sleigh pulled by flying reindeer. Santa is only a mythical figure.

So, Jesus Christ is an historical character while Santa Claus is only a legendary character.

On the other hand, Jesus came for sinners, and not for those who thought they were good – He said “I have come to call not those who think they are righteous, but those who know they are sinners and need to repent” (Mt. 9:13; Mk. 2:17; Lk. 5:32NLT). After the conversion of Zacchaeus, a well know sinner, Jesus said that He “came to seek and to save those who are lost” (Lk. 19:10). As the Bible says we are all sinners (Rom. 3:23), this means He came for everyone!

Recently when cleaning out a family home that had been occupied for three generations, we found some things that had been Christmas presents. However, as many of these were no longer useful or significant, they were thrown out as rubbish. Christmas presents eventually finish up in the garbage (trash) dump. Santa’s gifts only have a finite lifetime.

By comparison, Jesus offered the gift of forgiveness and of eternal life, which goes on forever! He asks, “Do you want to be forgiven?”. Also, the gift was Himself, not something that had been made by a person or a machine. Jesus is the best gift! He is God’s greatest gift. Paul called it “indescribable” (2 Cor. 9:15). “This is how God loved the world: He gave His one and only Son, so that everyone who believes in Him will not perish but have eternal life” (Jn. 3:16). Let’s remember this as we give gifts to each other this Christmas.

Jesus gave the best gift – it lasts longer and is for everyone.