Where are Satan and demons? 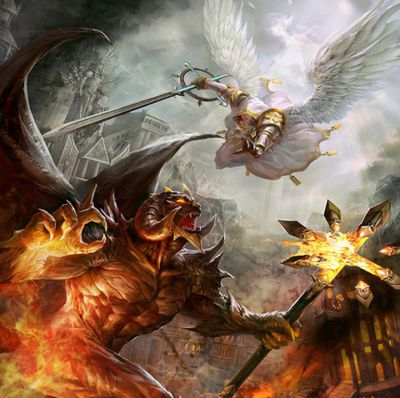 I have been asked this question: “Where is the place of the demon on air? For Daniel prayed and the prince of Persia held the Amen of his prayer”.

The Prince of Persia

“The prince of Persia” is mentioned in Daniel 10:13, 20. The book of Daniel was probably written about 530 BC. Daniel had been exiled to Babylon in about 605 BC and the exile finished when Zerubbabel returned to Jerusalem in 538 BC. His book is historical narrative (Ch. 1-6) and apocalyptic (Ch. 7-12).

Chapter 10 describes Daniel’s vision of a heavenly man in 537 BC. When Daniel received a vision of a great war, he was disturbed and prayed for God’s help. Then he mourned for three weeks until he had the vision of the heavenly man who was probably an angel (Dan. 10:5-21). The angel said that Daniel’s prayer had been heard and the angel had been sent to help him. But the angel had been delayed for 21 days by the prince of “the Persian kingdom”, presumably a demon associated with the Persian Empire (Note that the archangel Michael is called a “prince” in Daniel 10:13, 21; 12:1). The angel said that the archangel Michael had helped them overcome the demon. This vision made Daniel weak and speechless, but the angel strengthened him. The angel came to reveal future events to Daniel. And after this, the angel would return to oppose the prince of Persia once again and later on the prince of Greece (presumably a demon associated with the Greek Empire) would come.

This shows that there was a spiritual battle going on. God’s prophet Daniel was being opposed by a particular demon that was associated with the Persian government. Maybe they were influencing the government to make life difficult for Daniel This opposition caused the answer to Daniel’s prayer to be delayed. But God’s angel protected Daniel from the demon’s influence and the prayer was eventually answered.

The ruler of the kingdom of the air

The question is “Where is the place of the demon on air”? The word “air” isn’t mentioned in the passage in Daniel 10, but is mentioned in a New Testament passage: “As for you, you were dead in your transgressions and sins, in which you used to live when you followed the ways of this world and of the ruler of the kingdom of the air, the spirit who is now at work in those who are disobedient” (Eph. 2:1-2).

Ephesians 2:1-3 shows our situation before becoming Christians. Here unbelievers are said to be spiritually dead (separated from God) and following the ways of Satan, who is “the ruler of the kingdom of the air”. Elsewhere Satan is called “the prince of this world”, “the god of this age”, and the whole world is said to be under his control (Jn. 14:30; 2 Cor. 4:3-4; 1 Jn. 5:19). There are three possible interpretations of “the kingdom of the air”:
– It’s the realm under Satan’s influence which is described elsewhere as “this world”, “the whole world”, and “this age”.
– It’s the realm occupied by demons. This may be part of the “heavenly realms” occupied by demons (evil spirits) (Eph. 1:3; 6:12). Christ is in the heavenly realms (Eph. 1:20) as are angels, Satan and demons (Eph. 3:10). Also, the Greek word translated “air” (aeros, Strongs #109) means the lower atmosphere and according to Jewish opinion, the demons occupy this realm (Thayer’s Greek Lexion).
– It’s Satan’s world system, his philosophy of life, which includes religion and righteousness without God, as well as sin. People in this system are subject to Satan’s influence.

The Greek word translated “spirit” (pneumatos, Strongs #4151) in Ephesians 2:2 means the influence which governs someone or the source of power, affection, emotion or desire (Thayer’s Greek Lexion). It’s saying that Satan is the dominant influence in the lives of non-Christians.

The activities of Satan and demons are more important than their place or location. As they are spirits without a body, they don’t necessarily occupy a physical place like we do. It’s clear that Satan and demons have access to both God in heaven and humanity on earth (Job 2:1-2).

Satan continually accuses believers before God (Rev. 12:10). For example, he questioned Job’s faithfulness (Job. 1:9-11; 2:4) and questioned the fitness of the Jews to carry out priestly functions after the exile (Zech. 3:1-5). But in future Satan will be evicted from heaven.

Satan impacts on God’s people as a “roaring lion” (1 Pt.5:8) and an “angel of light” (2 Cor. 11:14). As a roaring lion, Satan devours and destroys. For example, Jews and Christians have been persecuted for thousands of years. As an angel of light, Satan deceives both believers (2 Cor. 11:3-4) and unbelievers (Rev. 20:3). He propagates a counterfeit Jesus, a counterfeit spirit, and a counterfeit gospel. And his false apostles can prophesy future events and do miracles, including healing (Mt. 7:22-23; 2 Cor. 11:13). He also convinces people that he doesn’t exist. But in future Satan will be evicted from the earth.

Fortunately, the evil acts of people and Satan are under God’s control (Job 1:12; Acts 4:28). So God restrains Satan and his demons. Satan is restrained in stages. Jesus did it when He was on earth (Mt. 12:29). It was guaranteed by the death and resurrection of Christ (Heb. 2:14). In future Satan won’t be able to deceive the nations during the millennial reign of Christ (Rev. 20:1-3). And it will be eternally true when he is cast into the lake of fire (Rev. 20:10).

Though Satan has been defeated, and eventually will be thrown into the lake of fire, he is still actively spreading evil. Christians need to understand who he is, and what he is able to do while he is still active.