The Olympic Games at Rio de Janeiro, began with a spectacular opening ceremony, which included fireworks, more than 6,000 dancers and Brazil’s most famous song, “The Girl from Ipanema”. Over 11,000 athletes are competing in 306 events and 28 sports.

Sports can build character. Athletes need to respect and build relationships with team mates. This is particularly important in team sports where cooperation is vital. What about us? Let’s be good team mates by encouraging one another in our teams at work or church. And by forgiving one another.

Athletes commit to training schedules that require discipline, perseverance and endurance. This is challenging and athletes push themselves to the limit. The Christian life is like a race (2 Tim. 4:7) – it requires discipline and endurance to get through life’s trials and temptations. The Bible says, “let us run with endurance the race God has set before us” (Heb. 12:1).

Christians are to be involved and obedient like athletes, and not like spectators (2 Tim. 2:5). In the context of Christian service, Paul says “.. train yourself to be godly. Physical training is good, but training for godliness is much better, promising benefits in this life and in the life to come” (1 Tim. 4:7-8). He’s saying that spiritual fitness is better that physical fitness. As physical training takes dedication and effort, spiritual training in godliness also takes dedication and effort.

Sports are games and the Olympics are called “Games”. Sport is play and not work (although it’s an occupation for professional athletes). Let’s keep this in mind when we watch the competitions. Let’s not value the game so highly that it becomes an idol that separates us from God.

Greek athletes competed for the “victors crown” (2 Tim. 2:5NIV), which was a wreath placed on the head of a victorious athlete. Paul uses this to illustrate Christians as striving for the prize of a reward for their faithful service for Christ: “Don’t you realize that in a race everyone runs, but only one person gets the prize? So run to win! All athletes are disciplined in their training. They do it to win a prize (crown) that will fade away, but we do it for an eternal prize (crown)” (1 Cor. 9:24-25). He’s saying that we should all run like winners. The goal of winning determines an athlete’s lifestyle. Likewise, striving for the eternal “crown of life” should characterize a Christian’s lifestyle (Jas. 1:12). 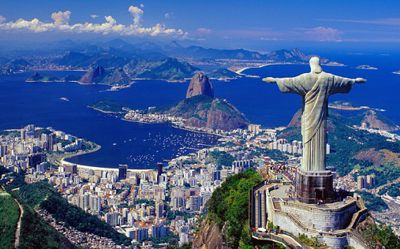 There is a silent spectator watching the Olympic Games at Rio. The statute of “Christ the Redeemer” towers over the city. With a height of 30 metres (98 ft), on an 8 metre (26 ft) pedestal, it looks down from the top of Mount Corcovado, 700-metre (2,300 ft) above sea level. The statue, which can be seen from almost anywhere in Rio de Janeiro, is one of the main landmarks of Brazil. It can be a reminder of our spiritual lives. What do we think about Jesus? If we claim to be a Christian how committed and dedicated are we to serving Him?

Finally, are we “one of Jesus’ athletes” like in this children’s song?

Grab your sneakers, Tie your laces
Pull your socks up, Do you stretches
Hear the Marshall, On your marks
Ready set go, Out of the blocks

Feel the spirit, Hold the torch
Carry the flame, Run the course
Cheer the Aussies, Olympic Games
Patriotic, Fade away

In my dreams I have been an Olympic athlete
I’ve been striving for gold down at Rio
In my life I can be one of Jesus’ athletes
And His golden reward lasts forever
(Neil Holman, 2000)

What does God want us to remember?

At the “real” start of the third millennium

Although one day, month or year is not necessarily more important than another (Rom. 14:5), we all like to celebrate important dates such as birthdays and wedding anniversaries. These are milestones that remind us of significant events along the road of life. Let’s look at some important events that God wants us to remember and celebrate.

The Sabbath was to be observed by the Israelites as a day of rest from everyday work, as a reminder of their God who rested after His work of creation (Ex. 31:14-17). The principle of one day’s rest in seven was estab­lished in Old Testament times for the benefit of individuals, fami­lies, employees and even animals (Ex. 20:10; Mk. 2:27). Its establish­ment in the account of creation implies that it is meant for every­one, not just for Israel.

It is said that God “blessed the seventh day and made it holy” (Gen. 2:3; Ex. 20:11). This indicates two purposes for the Sabbath rest –as a gift (or blessing) from God for the well-being of humanity, and a special (or holy) day for God. Besides physical rest, it also means remembering the Creator and praising God for His provision for us. He had given us life and time, and on this day we are to give some time back to Him.

So, the Sabbath rest is God’s milestone pointing out His good­ness to everyone as their Creator as we pause for a regular weekly break from work. Remember, the wisest man that ever lived said, “Remember your Creator in the days of your youth” (Eccl. 12:1). Creation reveals the Creator’s eternal power and divine nature .(Rom. 1:20). But this is less evi­dent when life becomes more troublesome and less enjoyable. Unfortunately, those who reject this revelation, choose to worship idols instead of “the God who made the world and everything in it” (Rom. 1:23,25; Acts 17:24).

The Israelites were given a sec­ond reason for observing the Sabbath day: “Remember that you were slaves in Egypt and that the LORD your God brought you out of there with a mighty hand and an outstretched arm” (Dt. 5:15). It was a weekly reminder of their miraculous deliverance from slavery in Egypt. This act of God is called “redemption,” which means “buying back” or “ransoming from captivity.” Christ was a “redeemer” in that by His sacrificial death He paid the ransom for our sinfulness and so delivered us from slavery to sin and its penalty (Eph. 1:7).

So, the Sabbath is also God’s milestone pointing out His mercy toward His chosen people as their redeemer. As the Sabbath rest included employees, the Israelites were to show a loving concern to others (Dt. 5:14). This was con­firmed when Christ healed the man with a shrivelled hand on the Sabbath (Mk. 3:1-5).

Jesus said that He was Lord of the Sabbath and demonstrated this as the Redeemer of the world (Mt. 12:8; Lk. 4:16-21). The Sabbath was “a shadow of the things that were to come; the reality, however, is found in. Christ” (Col. 2:17). After the day of Pentecost, it was more important to remember God’s great salvation for mankind’s sins than to remember the deliverance of the Jews from Egypt. Consequently, the early Christians met for worship and the collection of monetary gifts on the first day of the week in memo­ry of Christ’s resurrection (Acts 20:7; 1 Cor. 16:1-2). Christian wor­ship on Sunday replaced Jewish observance of the Sabbath. It is interesting to note that according to Leviticus 23:15, the day of Pentecost (Acts. 2:1) may have been on the first day of the week. However, some authorities state that the Pharisees believed that the Sabbath referred to here is the holy day of Passover which fell on a different day each year.

The Jews also celebrated their release from slavery in the first month of each year. As God’s peo­ple in Old Testament times, they were given a series of annual reli­gious festivals by God. These festi­vals commemorated occasions when God had reached out in power to intervene for the Jews or had provided for them in a time of distress. It reminded them of God’s presence and activity among them.

The first and most important of the festivals was the Passover, which was celebrated in the first month of the religious year (Ex. 12:1-30; Lev. 23:4-8). The Hebrew calendar is based on the 29.5 day lunar cycle. Their first month commenced after the spring equi­nox and is equivalent to March/April inour calendar. As their months began at new moon and the Passover began on the fourteenth of the month, the Passover corresponded with a full moon. Easter is its direct equivalent in our calendar, being the Sunday after the first full moon on/after March 21.

The Passover corresponded with the beginning of the grain harvest (Dt. 16:9) and it commem­orated the deliverance and exo­dus of the Jews from slavery in Egypt during the reign of Pharaoh Neferhotep 1 (Ex. 12). This was achieved in a miraculous way through the death of a lamb and smearing the lamb’s blood on their door frames. The plague of death to all the first-born sons in Egypt “passed over” the Jewish households with the sign on the door frames. Soon afterwards the Egyptians urged the Jews to leave their country.

Like the Sabbath, these reli­gious festivals were said to be “a shadow of the things that were to come; the reality, however, is found in Christ” (Col. 2:17). Paul referred to Christ as “our Passover Lamb” (1 Cor. 5:7). So the Passover was an illustration of Christ’s sacrifice for us. As the death of the Passover lamb saved the Jews from death, so Christ’s death can save us from the pun­ishment of eternal death in hell. The similarity is emphasized by the fact that Jesus was crucified at the time of the Passover celebra­tion (Jn. 18:28; 19:14).

When Jesus Christ celebrated the Passover with His disciples, He instituted the Lord’s Supper by relating the breaking of bread and the drinking of wine to His coming death (Lk. 22:7-20). His followers were told to do this in His remembrance (1 Cor. 11:23­26). Believers are told, “Whenever you eat this bread and drink this cup, you proclaim the Lord’s death until He comes” (1 Cor. 11:26). So, the annual Passover was replaced by the weekly Lord’s Supper (Acts 20:7).

It’s obvious that God wants us to remember and celebrate His great achievements in creation and redemption. This can be done by a regular weekly break from work and by a regular par­taking of the Lord’s Supper. These are two of the most impor­tant things we can do this week, month, year and millennium –and they will refresh us physical­ly and spiritually.

Such celebrations are not only for now but are for eternity, as the role of God the Father and the Lord as Creator and Redeemer is the theme of the great future cele­bration in heaven: “You are wor­thy, our Lord and God, to receive glory and honor and power, for You created all things, and by Your will they were created and have their being … You are wor­thy to take the scroll and to open its seals, because You were slain, and with Your blood You pur­chased men for God from every tribe and language and people and nation” (Rev 4:11; 5:9).