How can we know that God exists?

Does God exist? Some people say yes, others say no, and some just don’t know. Let’s look at some of the evidence that should help all of us.

Creation
We live in an amazingly complex world. The universe is so vast that scientists use light-years to measure distances in space. The distance that light travels in one year is 9.5 trillion kilometers. That’s 9.5 followed by 12 zeros! Starting with us, size increases: the earth, the sun, the solar system, and our galaxy – the Milky Way – which is approximately 100,000 light-years across.

Not only is it very large, but the universe is also made up of very small constituents. Consider us; then consider the ant, the amoeba, the molecule, the atom, the proton, neutron and electron, and subnuclear particles called quarks.

Most digital cameras have a zoom lens that can change the image size by up to three times, and camcorders have 10 times optical zoom. But if we went on a cosmic zoom extending from the galaxy down to quarks, we would change size by 1×1042 times, which is “1” with 42 zeros after it!

This amazingly complex universe is loaded with information and evidence of design. On earth we also have a living world which reproduces itself. The information for living creatures is coded in DNA molecules. But information is the product of intelligence, not chance. We know from the world around us that life always comes from something else which is living. Life does not come from nothing, it comes from something, and that something is always something which is alive. A living God created the world and all life that exists came from Him. God is the origin of life. 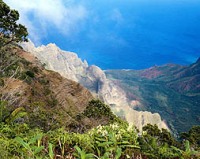 According to the law of cause and effect, creation demands a creator and design demands a designer. By looking at our universe, anyone can know that there is a Creator God. Creation shows that God is intelligent and powerful. The Bible’s message to those who reject this knowledge is: “The truth about God is known instinctively. God has put this knowledge in their hearts. From the time the world was created, people have seen the earth and sky and all that God made. They can clearly see His invisible qualities – His eternal power and divine nature. So they have no excuse whatsoever for not knowing God” (Rom. 1:19-20 NLT).

Conscience
But there is another kind of information in our world. Every person is born with a conscience. Each of us has an instinctive knowledge of right and wrong. For example, most people know it is wrong to lie, steal, commit adultery and murder. The conscience is like a built-in alarm. If we liken our body to computer hardware, then our conscience is like the software program that issues instructions to the hardware. But in this sinful world it is often programmed wrongly.

The Bible gives God’s standards for right and wrong (2 Tim. 3:16-17). But for those who are ignorant of these moral laws it says: “They demonstrate that God’s law is written within them, for their consciences either accuse them or tell them they are doing what is right” (Rom. 2:15).

Those who have not heard about what the Bible says will be judged according to their conscience. So the Creator made us with a mind that is able to make choices, not one that is driven by instinct. The conscience shows that God is concerned with our decisions and our behavior. Unfortunately, we often choose to disobey our conscience. Then we have a guilty conscience. But the Creator has provided the solution to our sinful ways.

Christ
The Bible is God’s special message for mankind. It tells us all we need to know: about history and mankind; about the moral choices made throughout history from the time of our original parents Adam and Eve; about how we have all rebelled against God and gone our own way; about how we all have a guilty conscience, whether we acknowledge it or not; about how this sinful attitude has led to suffering, disease, decay, death and eternal punishment; about how God’s solution to our problems was to send His Son Jesus Christ to take the punishment that we deserve. Christ was crucified and then resurrected back to life, which is particularly remembered at Easter time. His suffering and death were dramatized last year in the Mel Gibson film, “The Passion of the Christ.”

The Bible says, “the wages of sin is death, but the gift of God is eternal life in Christ Jesus our Lord” (Rom. 6:23 NIV). Christ offers each of us the opportunity to be reconciled to God and have our conscience cleansed (Heb. 9:14; 10:22). First, we need to realize our hopeless situation, and then we need to accept God’s gift of forgiveness. Jesus Christ shows that God is compassionate and loving. He is waiting for people to accept His offer to give them a new life and an inheritance with Him in the life to come.

Life Changing Evidence!
God has revealed Himself in three ways: in creation, through our conscience and by His Son, Jesus Christ. Based on this evidence it is foolish to say there is no God (Ps. 14:1; 53:1). Creation and conscience are available to every person, while the clearest revelation is through Jesus Christ, who is made known through the Bible. This is why the Bible is the most important book ever written.

If you come to a different conclusion, then there is a faulty assumption in your reasoning. Have you excluded the correct conclusion before examining the evidence?

This entry was posted on January 12, 2010 by George Hawke. It was filed under Answer, Christian, God and Jesus, Spiritual and was tagged with Christ, conscience, Creation, evidence, God, revelation.