Why Jesus was sent?

Jesus as ambassador, lifesaver and gift

At this time of the year we remember the incarnation when Jesus Christ was born into the world. Scripture teaches that He was sent into the world by God the Father. Let’s look at why Jesus was sent. What was His mission and purpose?

In the Old Testament times God spoke to mankind through people such as Noah, Abraham, Moses, the judges and the prophets. They were divinely inspired spokesmen for God. We read in Hebrews, “In the past God spoke to our ancestors through the prophets at many times and in various ways, but in these last days He has spoken to us by His Son” (Heb. 1:1-2NIV).

It reminds me of the parable of the wicked tenants where a landowner rented his vineyard to some farmers. When he sent his servants to collect the harvest, they were killed. Then he sent his son to them, but they killed him as well (Mt. 21:33-46). In this parable, the landowner is like God, the servants are like the prophets and the son is like Jesus. First God sent the prophets and then He sent His Son.

Paul wrote, “When the set time had fully come, God sent His Son, born of a woman, born under the law, to redeem those under the law, that we might receive adoption to sonship” (Gal. 4:4). Who set the time? God the Father. He is the one who did the sending. It was His idea. At Christmas we remember how, “God sent His son”. Although Mary was His earthly mother, God was His Father. This means that Jesus is the Son of God, which shows that He is divine; a part of the trinity. Jesus is unique in this aspect. Jesus was “born of a woman”, which is the usual way that people enter the world. It shows that Jesus was also a man. What an amazing way for God’s Son to enter the world!

The New Testament gives three reasons why Jesus was sent: to be an ambassador, a lifesaver, and a gift from God.

To be an ambassador

Jesus was sent to be an ambassador. What does an ambassador do? They represent whoever sent them. They are authorised representatives that are usually sent to a foreign country. The prophets were God’s ambassadors, although they represented Him in their own countries. However, their message came from a different country; it was from heaven.

Jesus was God’s ambassador. But He was a different kind of ambassador. How was Jesus’ ambassadorship different? He was sent to be born in a foreign country (earth) as a baby and not as a mature adult. This means that He wasn’t a foreigner. He grew up on earth and didn’t just arrive as an adult. So God sent an ambassador who wasn’t a foreigner. To all appearances He was a normal person like you or I. He lived in Palestine and was not seen as a foreigner. He spoke the same language, wore the same clothes, and had a similar appearance to his fellow countrymen. In this regard, He was like the prophets.

What does the Bible say about Jesus as an ambassador?

So Jesus was an ambassador whose message came from God the Father. He spoke on God’s behalf.

So Jesus was an ambassador who acted in accordance with God’s will.

In living for God, Jesus showed God’s kindness and love in a new way. After describing one’s sinfulness before salvation, Paul wrote “But when the kindness and love of God our Savior appeared, He saved us, not because of righteous things we had done, but because of His mercy. He saved us through the washing of rebirth and renewal by the Holy Spirit, whom He poured out on us generously through Jesus Christ our Savior, so that, having been justified by His grace, we might become heirs having the hope of eternal life” (Ti. 3:4-7). When did “the kindness and love of God our Savior” appear? It was when Christ arrived on earth. At Christmas we remember this event.

John wrote, “This is how God showed His love among us: He sent His one and only Son into the world” (1 Jn. 4:9). And the well known verse, “For God so loved the world that He gave His one and only Son, that whoever believes in Him shall not perish but have eternal life” (Jn. 3:16).

So Jesus was an ambassador who showed God’s kindness and love. We learn more about this in the next illustration. 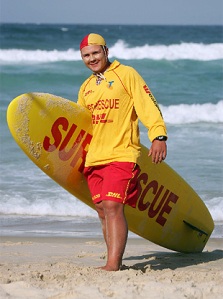 To be a lifesaver

Jesus was also sent to be a lifesaver. What does a lifesaver do? They rescue those who are drowning. At the beach they watch the surfers and give warnings when there is danger such as sharks, rips or rough waves.

Jesus was God’s lifesaver. God sent Jesus on a rescue mission to save us from the lake of fire. Like a lifesaver rescues those who are drowning, Jesus can rescue us from God’s eternal judgment. His name reflects the fact that He is the most important part of God’s rescue plan. The name “Jesus” is the Greek form of “Joshua” which means “God saves”. Joseph was told that Mary “will give birth to a son, and you are to give Him the name Jesus, because He will save His people from their sins” (Mt. 1:21).

But He was a different kind of lifesaver. How was Jesus’ lifesaving different? First, His was a rescue of our spirit, soul and body; not just a physical one. Second, He took the place of the victim and died in the process. Third, when it is accepted, Christ’s lifesaving is effective forever. We have heard of people who died when saving someone else, but the person who was rescued could drown later. In fact they will eventually die later unless the Lord comes in the meantime and they are believers.

What does the Bible say about Jesus as a lifesaver?

Jesus paid the penalty for our sin

All the world’s problems come from the sinful nature we inherited from Adam and Eve. Humanity’s sinfulness was the target of God’s rescue plan. “The reason the Son of God appeared was to destroy the devil’s work” (1 Jn. 3:8). What is the devil’s work? Sin, because “the devil has been sinning from the beginning”. Satan specialises in sinning.

God did this by sending Jesus to the earth to die on the cross (Jn. 12:27). God “loved us and sent His Son as an atoning sacrifice for our sins” (1 Jn. 4:10). Then He was buried and rose from the grave and ascended back to heaven. So the baby born in Bethlehem died at Calvary for our sins.

By confessing our sinfulness and accepting that Jesus died as our substitute there is  liberation from sin and its consequences: Jesus was sent to proclaim good news to the poor, freedom for the prisoners, recovery of sight for the blind, and to set the oppressed free (Lk. 4:18-21). Jesus is the answer to the world’s problems. He is the greatest lifesaver.

Not only can we be rescued from eternal punishment, but we can be eternally in God’s presence. “God sent His Son … that we might receive adoption to sonship” (Gal. 4:4). The change described in this passage is from being slaves to being sons. The Jews were under the bondage of the law and the Gentiles were under the bondage of idolatry. Through Christ’s sacrifice, both can be changed from slaves to heirs as sons of God.

To be a gift

Have you accepted His gift of salvation or has it been discarded or forgotten? This is important because the next time Jesus is sent to earth it will not be as an ambassador or a lifesaver or a gift but as a judge.

Here’s how to accept God’s gift. We can’t escape hell and get to heaven by good works. When people asked Jesus “What must we do to do the works God requires?” He answered, “The work of God is this: to believe in the one He has sent.”’ (Jn. 6:28-29). Instead of good works we need to confess our sins and trust in Christ’s work of salvation on our behalf.

Here’s the result of accepting God’s gift: those who accept God’s rescue plan have a new life in Christ which is a spiritual life. “He sent His one and only Son into the world that we might live through Him” (1 Jn. 4:9). Without Jesus in our life we are spiritually dead, with Him in our lives we are spiritually alive. He said, “whoever hears my word and believes Him who sent me has eternal life and will not be judged but has crossed over from death to life” and “I have come that they may have life, and have it to the full” (Jn. 5:24; 10:10). Anyone alive has physical life, But Jesus is talking about spiritual life here. Believers have been born into a spiritual life; they have changed from being spiritually dead to being spiritually alive. Paul calls it a new creation (2 Cor. 5:17).

The disciples were an example of those who accepted God’s gift. Jesus prayed, “I gave them the words you gave me and they accepted them (they accepted that He was God’s ambassador). They knew with certainty that I came from You, and they believed that You sent me (they accepted that He was God’s lifesaver)” (v.8, 25). He also prayed for unity between Christians so “that the world may believe that You have sent me” (Jn. 17:21, 23). Let’s display the character of God and Christ so that others will see Christ in us as the Father is seen in Christ.

Jesus continued to pray for the disciples “As You sent me into the world, I have sent them into the world” and “As the Father has sent me, I am sending you” (Jn. 17:18; 20:21). As God sent His Son to earth, Jesus sent His disciples to proclaim the gospel message. Those of us who trust in Christ are also His disciples and are also sent to be God’s ambassadors to proclaim the gospel message in our part of the world. As Paul wrote, “We are therefore Christ’s ambassadors, as though God were making His appeal through us” (2 Cor. 5:20). In this case the message was to be reconciled to God.

As we give gifts to each other at Christmas let’s remember that God the Father sent His Son as an ambassador so we can learn more about God, as a lifesaver who we can trust in for eternal life and as a gift for us to accept and share with others.

This entry was posted on December 19, 2011 by George Hawke. It was filed under Christian, Christmas, Spiritual and was tagged with ambassador, Christ, Christmas, Jesus, lifesaver, mission, purpose, sent.