How the universe is held together 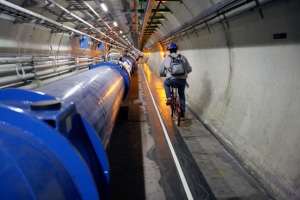 Recently the Large Hadron Collider near Geneva in Switzerland has been used to discover a new sub-atomic particle. The collider directs streams of protons around a 27 km circular tunnel so they collide head-on and records the sub-atomic debris that results.

A researcher reported, “Our new measurements are a great way to test theoretical calculations of the forces that act on fundamental particles, and will move us a step closer to understanding how the universe is held together”. So scientists are seeking to understand how the universe is held together. According to the Bible, what they discover will be secondary causes and not primary ones.

The Bible also teaches that God spoke the universe into existence.

The orderly mechanisms and models of science reflect God’s nature. These mechanisms and models are secondary causes which describe how the universe operates. They are part of the creation over which God has dominion (Job 25:2; 38:33). The eternal omnipotent God who has massive intelligence is the original and ultimate cause because He determined how the universe operates.

God not only designed and created the universe, He continues to sustain it by His divine powerful word. He is both a Creator and a Sustainer.

This entry was posted on December 23, 2011 by George Hawke. It was filed under Christian, Creation, Spiritual and was tagged with cause, Creation, Creator, God, primary, science, secondary, sustain, sustainer, universe.