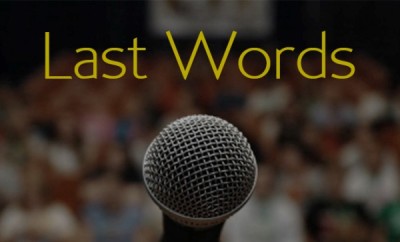 The Bible records many of the words spoken and written by people in ancient times. In this article we look at what we can learn from some of the words spoken by six godly men near the end of their lives. The men are: Joseph, Moses and Joshua from the Old Testament and Jesus, Stephen and Paul from the New Testament.

Joseph was the 11th son of Jacob. As Jacob’s name was changed to Israel, Joseph was one of the original children of Israel! Jacob’s descendants were God’s special people in the Old Testament times. Joseph was sold as a slave in Egypt and rose to second in command under Pharaoh king of Egypt. God used him to save his family and the Egyptians from a 7-year drought – in this sense he was their savior. During this time his father’s household also moved to Egypt.

Final words. At the age of 110 years, “Joseph said to his brothers, ‘I am about to die. But God will surely come to your aid and take you up out of this land to the land He promised on oath to Abraham, Isaac and Jacob.’ And Joseph made the Israelites swear an oath and said, ‘God will surely come to your aid, and then you must carry my bones up from this place’” (Gen. 50:24-25NIV). As he knew that God had promised the land of Canaan to the Israelites and trusted that God would take them from Egypt to Canaan, he made them promise to take his mummy (embalmed body) with them so it could be buried in Canaan.

Lesson for us. Joseph’s faith is an example for us to follow, “By faith Joseph, when his end was near, spoke about the exodus of the Israelites from Egypt and gave instructions concerning the burial of his bones” (Heb. 11:22). “Faith is confidence in what we hope for and assurance about what we do not see” (Heb. 1:1). So up to the end of his life Joseph trusted that God’s promises would be fulfilled. He didn’t backslide from when he trusted God in his youth.

Moses was an Israelite born in Egypt in the third generation after Joseph. God used him to rescue the Israelites from slavery in Egypt – in this sense He was their savior. In the exodus about 2 million Israelites miraculously crossed the Red Sea and travelled towards Canaan. He took Joseph’s mummy with him (Ex. 13:19).

Final words. Before his death at the age of 120 years Moses transferred leadership of the Israelites to Joshua and told him, “Be strong and courageous, for you must go with this people into the land that the LORD swore to their ancestors to give them, and you must divide it among them as their inheritance. The LORD Himself goes before you and will be with you; He will never leave you nor forsake you. Do not be afraid; do not be discouraged “(Dt. 31:7-8). He encouraged Joshua to continue leading the people by reminding him of God’s continual presence. Then he taught them a new song and gave a farewell message in which he assured them of God’s protection and support, “The eternal God is your refuge, and underneath are the everlasting arms” (Dt. 33:27).

Lesson for us. Christians should appreciate God’s continual presence, protection and support via the indwelling Holy Spirit. We should be encouraged by this, whatever our role may be. This also helps us to be contented and avoid the love of money or possessions (Heb. 13:5). Also, are we training the next generation in God’s ways like Moses trained Joshua?

As one of the faithful spies, Joshua didn’t die in the desert like the rest of the Israelites who rebelled against God. After the death of Moses he led the Israelites into Canaan.

Final words. In a farewell message before he died at the age of 110 years Joshua said, “Now fear the LORD and serve Him with all faithfulness. Throw away the gods your ancestors worshiped beyond the Euphrates River and in Egypt, and serve the LORD. But if serving the LORD seems undesirable to you, then choose for yourselves this day whom you will serve, whether the gods your ancestors served beyond the Euphrates, or the gods of the Amorites, in whose land you are living. But as for me and my household, we will serve the LORD.” (Josh. 24:14-15). He urged them to worship God instead of idols. At this time they buried Joseph’s mummy in Canaan in accordance with his request (Josh. 24:32).   The Israelites followed the Lord throughout the lifetime of Joshua, but turned to idolatry soon afterwards (Josh. 24:31; Judges 2:7, 10-13).

Lesson for us. Godly people like Joshua can have a great influence on others. They are faithful to the end of life and don’t backslide like the others who died before reaching Canaan and so didn’t enjoy their inheritance on earth.

According to Luke’s genealogy, Jesus Christ was in the 52rd generation after Joseph (Lk. 3:23-37). Jesus was unique as He was not only a person like us, but He was also the Son of God who made the universe (Lk. 1:35)! Because He was divine, Jesus lived a perfect life and did no wrong. But He was executed and then came back to life and later returned to heaven. When Jesus died He took all the punishment that we deserve so that we can go to heaven if we trust in Him. In this sense He is a Savior for all humanity.

Final words. At the age of about 33 years, after the three hours of darkness when He was suffering crucifixion, Jesus said “It is finished” (Jn. 19:30). This meant that he had finished what He came to do, which was to suffer and die on our behalf. The way had been provided for sinners like us to be saved from eternal punishment and go to heaven instead. Before His ascension into heaven, Jesus told His followers, “…you will be my witnesses in Jerusalem, and in all Judea and Samaria, and to the ends of the earth” (Acts 1:8b). They would tell others living across the known world about Jesus.

Lesson for us. First, we need to accept Christ’s gift of salvation, because we can’t do anything else to deserve heaven. Second, once we follow Jesus we need to share the good news about Him to others.

Stephen was one of the seven men chosen to serve in the first church at Jerusalem. He was “full of faith and of the Holy Spirit”. Because Stephen preached powerfully about Jesus, the Jews made false accusations about him. In a long speech he listed the failures of the Jewish people, which made the Jews so furious that they stoned him to death.

Paul was a young Jewish leader who persecuted Christians and was associated with the stoning of Stephen. But God changed his life in a spectacular way and he became a follower of Jesus who spread across the Roman Empire the good news of Jesus had done.

Final words. In his last letter Paul wrote, “… The time for my departure is near. I have fought the good fight, I have finished the race, I have kept the faith. Now there is in store for me the crown of righteousness, which the Lord, the righteous Judge, will award to me on that day—and not only to me, but also to all who have longed for His appearing” (2 Tim. 4:6-8). He continued to trust God even though life had been difficult and the end of his service was near. He had obeyed the doctrines of the Christian faith and passed them on to others such as Timothy. Like the winner of a Greek athletic race was awarded a wreath (1 Cor. 9:25), his faithful service would be rewarded at the Judgment Seat of Christ.

Lesson for us. Godly people like Paul remain faithful to the end of life and don’t backslide like Demas who “loved this world” and deserted Paul (2 Tim. 4:10).

Until our final day, let’s imitate these godly men by having:

Because of the examples of these final words, “let us throw off everything that hinders and the sin that so easily entangles. And let us run with perseverance the race marked out for us, fixing our eyes on Jesus, the pioneer and perfecter of faith. For the joy set before him He endured the cross, scorning its shame, and sat down at the right hand of the throne of God. Consider Him who endured such opposition from sinners, so that you will not grow weary and lose heart” (Heb. 13:1-3). If we pay careful attention to these examples “we do not drift away” from an active faith in Christ (Heb. 2:1).

This entry was posted on December 1, 2012 by George Hawke. It was filed under Christian, Christian living, Spiritual and was tagged with final, Jesus, Joseph, Joshua, last, Moses, Paul, Stephen, words.