When you pay at a store or gas (petrol) station, have you been asked if you would like to buy something else with that? Then you see loads of snacks, fast food and sugary drinks. It’s a food temptation called ambush marketing. We also have temptations in supermarkets, in shopping centres, in advertising, in marketing, in our entertainment, in technological hardware and software and even on our Facebook pages! We live in a sea of temptation.

Temptation entices us to do something that is sinful. Fortunately God has provided three ways to resist the temptations we face in life: “No temptation has overtaken you except what is common to mankind. And God is faithful; He will not let you be tempted beyond what you can bear. But when you are tempted, He will also provide a way out so that you can endure it” (1 Cor. 10:13NIV). The Greek word translated “temptation” and “tempted” in this verse can mean either outer trials that test our faith or inner temptations to sin. Here we will apply it to the inner temptations to sin.

Corinth was a wealthy pagan Greek city. Paul wrote this letter to their church to instruct them about problems that they faced. There were divisions in the church, they accepted sexual immorality, they were taking their disputes to pagan courts, they were abusing the Lord’s supper, and there was false teaching about the resurrection of the dead. There were questions about married life, about eating food that had been sacrificed to idols, about church meetings, and about the use of spiritual gifts.

This verse comes from a passage on eating food that had been sacrificed to idols (1 Cor. 8:1-11:1). Paul begins by stating the principle that we shouldn’t stumble a believer with a weak conscience by causing them to act against their conscience with regard to a debatable matter (1 Cor. 8). So Paul would not exercise his right to eat food that had been offered to an idol if there was a Christian present who thought this was sinful. Then he illustrates this principle (1 Cor. 10). First, although as an apostle Paul had the right to be supported financially by the church, he didn’t claim this so that people couldn’t say that he was preaching for money. Second, he followed the customs of those he was preaching to, so they would be more likely to accept the gospel message. Third, like an athlete he exercised self-control and discipline when serving the Lord so as not to miss his reward. Fourth, the Israelites lacked self-control. In the exodus God rescued them from slavery, but they were punished for idolatry, sexual immorality and grumbling to God (1 Cor. 10:1-10).

Then the Bible applies what happed to the Israelites to us today (v.11). They are examples for us. They are warnings for us. The Bible was written for our benefit (Rom. 15:4). It has many lessons for us. The warning of this passage is spelled out “if you think you are standing firm, be careful that you don’t fall!” (v. 12). To think we are “standing firm” against temptation means being confident or complacent about temptation. The warning is to be careful we don’t yield to temptation. We all face temptation on a daily basis. We are all prone to giving in to temptation and sinning against God. We can all lack self-control.

Then three ways are given to resist temptation.

The Bible says, “No temptation has overtaken you except what is common to mankind”. So, “The temptations in your life are no different from what others experience” (NLT). Sometimes we think why am I so weak? Why do I always yield to this sinful desire, and give in to that addiction? Why am I always being tempted?

But our temptations are not unique. Every temptation we face is “common to mankind”. We all face temptation. Everyone is tempted. Temptation is normal for humanity. It’s usual. It’s common. So, don’t be surprised when you are tempted. It happens all the time. Expect to be tempted. For example, Paul warns us to beware when helping someone who has been sinful, because we may also be tempted to sin (Gal. 6:1).

Because temptation is normal, it’s not new. It’s been around since the days of Adam and Eve. Temptation is not a modern invention. For this reason, we can learn from the temptations faced in Biblical times and the ways they were resisted.

The normal process of temptation

The normal process of temptation is described by James: “When tempted, no one should say, ‘God is tempting me.’ For God cannot be tempted by evil, nor does He tempt anyone; but each person is tempted when they are dragged away by their own evil desire and enticed. Then, after desire has conceived, it gives birth to sin; and sin, when it is full-grown, gives birth to death”  (Jas. 1:13-15). 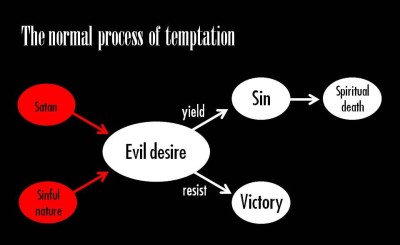 Temptation begins as an “evil desire” in our mind. Jesus said that “evil thoughts” lead to sin (Mt. 15:18-20; Mk. 7:20-23). Since the fall of humanity into sin we have a tendency towards evil desires. We are now self-centred. Given time, the temptation from an evil desire leads to sin and then to spiritual death and other consequences. Even if the spirit is willing, the flesh is weak (Mt. 26:41). The evil desire is influenced by Satan and our sinful nature. The process stops if we resist the temptation and there is victory over the temptation. So there is a choice to yield to or resist the temptation as shown in the diagram.

So temptation is like when fish see a fisherman’s bait or lure. If they eat it they are hooked. Otherwise, they can swim on their way. Likewise, if we take the bait when tempted then we are hooked and dragged away into sinful behavior and its consequences. That’s the normal process of temptation. But if we don’t take the bait and resist the temptation, we can continue serving the Lord.

The normal tools of temptation

This describes Satan’s tools, the aspects of the sinful world that he uses as bait to lure us into sin. They are evil desires arising from:

For example, the Israelites were tempted to eat, drink, indulge in revelry, indulge in sexual immorality, worship idols and grumble to God (1 Cor. 10:7-10). These are still normal temptations today. Have we ever been tempted to: eat too much, drink too much, party too much, commit sexual sins, let someone or something take the place of God in our lives, or complain to God?

The Bible says, “And God is faithful; He will not let you be tempted beyond what you can bear”. So, “He will not allow the temptation to be more than you can stand” (NLT) and “He’ll never let you be pushed past your limit” (Message). God doesn’t promise that we won’t be tempted, but He does promise to limit its intensity. Life is tough. Temptation is common. But there is no such thing as an unbearable temptation.

Bearable temptations in the Old Testament

The heroes of faith in Old Testament times are listed in Hebrews 11. They endured much shame and suffering rather that give up on God. They could have avoided this by renouncing God. That would have been a great temptation to them. Instead they resisted this temptation and continued to trust God’s promises.

Here’s what they went through (Heb. 11:33-39). They faced the dangers of lions, fire and swords. They were tortured, flogged, imprisoned, jeered, murdered, homeless, persecuted and mistreated. Because they remained faithful, we know that their temptations were bearable. Also, Job remained faithful after he lost his family, his wealth and his health. His temptations were bearable.

Bearable temptations in the New Testament

Paul would have been tempted to avoid all this by stopping serving the Lord. Because he remained faithful, we know that his temptations were bearable.

So, the temptations faced by God’s people are bearable. But temptation is not only normal and bearable, it is also escapable.

The Bible says, “God is our refuge and strength, an ever-present help in trouble” (Ps. 46:1). When those heroes of faith faced their troubles, all human support was usually stripped away. They learnt that God alone strengthens us at these times. He gets us through life’s temptations. In this sense, He is the way out. The way of escape. The Message says, “He’ll always be there to help you come through it”.

Joshua was told that God “will never leave you nor forsake you” (Dt. 31:8). David faced trouble without fear because God was with him (Ps. 23:5). God was close beside him. Likewise, God is with us in our temptations. He will not leave us or forsake us. He will provide a way of escape.

So, how did Joseph and Jesus escape temptations?

Joseph was a slave of Potiphar, the captain of Pharaoh’s guard in Egypt. Potiphar put him in charge of his household. Here’s how Joseph responded to temptation.
Gen. 39:6-12 “Now Joseph was well-built and handsome, and after a while his master’s wife took notice of Joseph and said, “Come to bed with me!” But he refused. “With me in charge,” he told her, “my master does not concern himself with anything in the house; everything he owns he has entrusted to my care … My master has withheld nothing from me except you, because you are his wife. How then could I do such a wicked thing and sin against God?” And though she spoke to Joseph day after day, he refused to go to bed with her or even be with her. One day he went into the house to attend to his duties, and none of the household servants was inside. She caught him by his cloak and said, “Come to bed with me!” But he left his cloak in her hand and ran out of the house.”

When Potiphar’s wife tried to seduce him, Joseph “refused to be with her”. He avoided the temptation as much as possible. Unlike Sampson, he didn’t give in to the pressure that went on “day after day” (Jud. 14:17; 16:16-17). So let’s avoid situations where we are likely to be tempted.

When Joseph was confronted again he “ran out of the house”. He had an escape plan. We have fire escape plans, but do we have plans to escape temptations?

In each case Jesus responded to temptation by quoting from the Bible. He answered, “It is written …”. So Satan can tempt those controlled by the Holy Spirit, but they can resist him with the truths of Scripture. The Israelites knew, “I have hidden your word in my heart that I might not sin against you” (Ps. 119:11). The truths of Scripture in our mind can protect us from yielding to temptation. Bible knowledge can help us to resist temptation.

So let’s be warned by the history of the Israelites of the danger of yielding to temptation. Don’t be hooked and dragged away by Satan. Resisting temptation requires self-control, which is part of the fruit of the Holy Spirit (Gal. 5:22-23). So the Holy Spirit helps us to resist temptation.

Remember the promise: “No temptation has overtaken you except what is common to mankind. And God is faithful; He will not let you be tempted beyond what you can bear. But when you are tempted, He will also provide a way out so that you can endure it” (1 Cor. 10:13).

God has given us these reasons to exercise self-control when we face temptations. Let’s remember and use these ways to resist the temptations we face.

This entry was posted on September 28, 2013 by George Hawke. It was filed under Christian, Christian living, promises, Spiritual, Trials and was tagged with bearable, Corinthians, escapable, Jesus, Joseph, normal, temptation.