Did you know that there is a full-sized replica of Noah’s ark in Dordrecht in The Netherlands? This post was inspired by a visit to this replica.

Many nations all over the world have flood stories. Even tribes that never heard of the Bible. The Biblical story in Genesis chapters 6 to 9 of the Bible is the only realistic flood story. In the Babylonian epic of Gilgamesh, for instance we find a brawl between gods and a cubic shaped ark, which is the least stable shape. However, the dimensions of Noah’s ark made it almost impossible to capsize. The ratio of 6:1 for length to width appears to be most stable and seaworthy and is still being used for unmotorised vessels.

When God decided to destroy the earth because of humanity’s corruption and violence, He told Noah to build an ark that was “three hundred cubits long, fifty cubits wide and thirty cubits high” (Gen. 6:15NIV). The length of a cubit was based on the distance from the elbow to the fingertips, so it varied between different ancient groups of people. Two types of cubit are mentioned in the Old Testament, with the older one being one handbreadth longer than the newer one (2 Chron. 3:3; Ezek. 40:5; 43:13). According to the NIV Study Bible, the old cubit was 7 handbreadths and the new one was 6 handbreadths.

Because it is not known what cubit Noah used, the replica uses a different definition of the cubit for each dimension! They call these the “three most famous cubit sizes” as follows:
• 45 cm (Hebrew) for the length, making 135 m
• 60 cm (Egyptian) for the width, making 30 m
• 70 cm (18th Century) for the height, making 21 m (but they state 23 m) 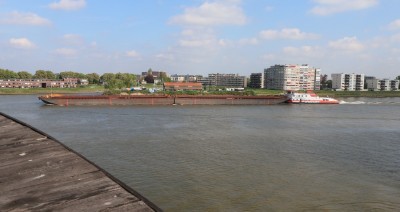 This means that the replica has a different shape to the original (being wider and higher for the given length). The original would have been about 140 m long, 25 m wide and 15 m high, which is shaped more like the barges that travel past the replica on the Rhine River.

Noah was told to “make yourself an ark of cypress wood; make rooms in it and coat it with pitch inside and out” (Gen. 6:14NIV). The Hebrew word translated “rooms” also means “nests”. There were to be rooms within the ark, which were pitched both inside and outside. The ark had a very solid construction. It was partitioned into many compartments, which led to extra strength. These rooms had different functions. Some were used to store food and if the rooms were large enough, they could be used as an animal cage. Furthermore, in the case of damaged compartments, the remaining rooms would maintain the buoyancy of the ark.

It is not known what type of wood was used to construct the ark – many translations call it “gopher wood” which is a transliteration of the Hebrew text. Pinewood seems to be the best option – this was used in the 1599 Geneva Bible and many modern translations render the Hebrew term as “cypress” (NET, NIV, NLT, NRSV). The ark was to be covered with pitch, both inside and outside. Pitch can be made from pinewood and is created by putting pinewood waste under a pile of sand and burning it to produce a think liquid pitch. Because of the large amount of resin present, pinewood is soft and flexible. After several years, the wood and resin become hard and strong. If the ark was made out of pinewood, it would have been very strong and durable. The replica ark was built out of 12,000 Scots pine trees from Scandinavia.

Cain’s descendant Jabal “was the father of those who live in tents and raise livestock. His brother’s name was Jubal; he was the father of all who play stringed instruments and pipes. Zillah also had a son, Tubal-Cain, who forged all kinds of tools out of bronze and iron. Tubal-Cain’s sister was Naamah” (Genesis 4:20-22NIV).

The Bible says that Tubal-Cain was a blacksmith and that there were stringed instruments at that time. The strings of a harp are made out of steel and are complicated to forge. Therefore, Tubal-Cain and his descendants must have been good blacksmiths. Tubal-Cain lived about 600 years before Noah. From this we can deduce that Noah probably had steel, hammers and nails for the construction of the ark.

Could all the animals fit in the ark?

Noah was told “You are to bring into the ark two of all living creatures, male and female, to keep them alive with you. Two of every kind of bird, of every kind of animal and of every kind of creature that moves along the ground will come to you to be kept alive. You are to take every kind of food that is to be eaten and store it away as food for you and for them” (Gen. 6:19-21).

A common criticism of the Biblical account is, “How can millions of species fit on the ark?”. But this fails to recognize that “every kind” does not mean “every species”. Instead, a “kind” is more like a “genus” than a “species”. Noah only needed a pair of every kind of creature, not of every species. For example, one kind of dog and one kind of horse, not many. Since the flood each kind has produced many species (variety within a genus). It is estimated that there were about 8,000 genera at that time, including extinct genera. This means that about 16,000 mammals, birds, reptiles and amphibians would need to be housed on the ark.

The Bible says that eight people survived the great deluge because they were on the ark. Noah, his wife, his sons, and their wives. However, there would have been more than eight beds on the ark. What is the reason for that? It took Noah about 120 years to build the ark. During this time he told the people that they could be safe on the ark (2 Peter 2:5). Unfortunately no one accepted the invitation.

Jesus said He is preparing a place for us in heaven, just like Noah prepared a place for the people of his age (Jn.14:2). In Noah’s time the ark was the only way to survive the great deluge. In the same way, Jesus came to earth to save us. Just like in Noah’s time, the Lord has a way to rescue people. Because God loved the world so much, He sent His Son Jesus Christ to the earth. Jesus died on the cross, to bear our sins and He rose again so we can be saved from the penalty of our sin; eternal death (Jn. 3:16). We are to tell the world of this salvation. Otherwise those places will stay empty (Mt. 28:19)!

This entry was posted on May 4, 2014 by George Hawke. It was filed under Christian, History and prophecy, Spiritual and was tagged with animals, ark, flood, God, Noah, purpose, size, wood.