Adam and Eve: Fact or fiction? 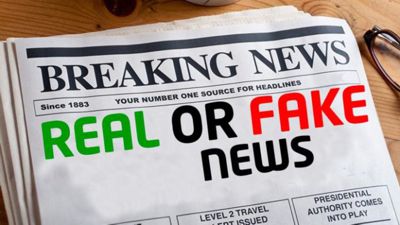 Fake news is influencing aspects of our lives as important as our political viewpoints, our relationships with the environment and our life expectancies. But fake news can be extremely hard to identify. Fake news articles often lack sources. People aren’t directly quoted, and source material for statistics may not be provided. Social media and the ease of accessing information has given rise to incidences of news being distributed that is inaccurate, skewed, biased, or completely fabricated. A Google search is often used to source information, but since anyone with access to a computer can publish anything online, it’s crucial that we evaluate the information we find. That means distinguishing fact from fiction. Does the Bible contain fake news?

Some claim that the early chapters of Genesis are more poetic and theological than factual by suggesting they are a creation myth or exalted prose or semi-poetic or a defence of monotheism. And Wikipedia says that Adam and Eve “are symbolic rather than real”. Others say it’s a story that points toward a larger symbolic truth or a metaphor of the relation of God and humanity.

In this post, we will evaluate this claim by looking at what the Bible says about Adam and Eve. Were they actual people or are they symbolic or mythical? Did they live on earth or did they come from someone’s imagination? Are they literal or literary?

The Bible says that Adam was the first man on earth whose wife was Eve and whose oldest sons were Cain, Abel, and Seth (Gen. 2-5). He also had many other sons and daughters (Gen. 5:4). These people differed from animals because they were made “in the image of God” (Gen. 1:27NIV; Ps. 8:5-8). An Israelite named Moses edited these records about Adam when he compiled Genesis about 1450BC (Lk. 24:27, 44).

Adam is also mentioned elsewhere in the Old Testament. In 1 Chronicles 1, the genealogy of Abraham begins, “Adam, Seth, Enosh, Kenan, Mahalalel, Jared, Enoch, Methuselah, Lamech, Noah” (1 Chron. 1:1-3). This means that the Jews who compiled this book in about 450BC (about 1,000 years after Moses) considered Adam to be the earliest ancestor of Abraham. So they confirmed that the account about Adam in Genesis was factual.

Adam is mentioned in six passages in the New Testament – once each by Luke and Jude and four times by Paul. Luke confirms that Adam is the earliest ancestor of Abraham, “the son of Enosh, the son of Seth, the son of Adam, the son of God” (Lk. 3:38). Here Adam is called “the son of God” because he had no human parents. This was written about 1,500 years after Moses.

In Romans 5 Paul gives a comparison between Adam and Jesus Christ. “Therefore, just as sin entered the world through one man (Adam), and death through sin, and in this way death came to all people, because all sinned—To be sure, sin was in the world before the law was given, but sin is not charged against anyone’s account where there is no law. Nevertheless, death reigned from the time of Adam to the time of Moses, even over those who did not sin by breaking a command, as did Adam, who is a pattern of the one to come (Jesus).
But the gift is not like the trespass. For if the many died by the trespass of the one man (Adam), how much more did God’s grace and the gift that came by the grace of the one man, Jesus Christ, overflow to the many! Nor can the gift of God be compared with the result of one man’s (Adam’s) sin: The judgment followed one sin and brought condemnation, but the gift followed many trespasses and brought justification. For if, by the trespass of the one man (Adam), death reigned through that one man (Adam), how much more will those who receive God’s abundant provision of grace and of the gift of righteousness reign in life through the one man, Jesus Christ!
Consequently, just as one trespass (Adam’s sin) resulted in condemnation for all people, so also one righteous act (Christ’s death) resulted in justification and life for all people. For just as through the disobedience of the one man (Adam) the many were made sinners, so also through the obedience of the one man (Jesus) the many will be made righteous” (Rom. 5:12-19). The difference was that Adam’s sin was the reason there is sin and death in the world, whereas the gift of eternal life came through Jesus Christ.

In 1 Corinthians 15 Paul gives a comparison between Adam and Jesus Christ. “For since death came through a man (Adam), the resurrection of the dead comes also through a man (Jesus). For as in Adam all die, so in Christ all will be made alive” (1 Cor. 15:21-22). The difference is that the descendants of Adam all die, whereas those who have faith in Christ will be resurrected from death to life.

In 1 Corinthians 15 Paul gives another comparison between Adam and Jesus Christ. “So it is written: ‘The first man Adam became a living being’; the last Adam (Jesus), a life-giving spirit. The spiritual did not come first, but the natural, and after that the spiritual. The first man (Adam) was of the dust of the earth; the second man (Jesus) is of heaven. As was the earthly man (Adam), so are those who are of the earth; and as is the heavenly man (Jesus), so also are those who are of heaven. And just as we have borne the image of the earthly man (Adam), so shall we bear the image of the heavenly man (Jesus)” (1 Cor. 15:45-49). The difference is that the descendants of Adam all have a natural body, whereas those who have faith in Christ will be resurrected to have a spiritual body.

In 1 Timothy 2 Paul refers to events in Genesis 2-3. “For Adam was formed first, then Eve. And Adam was not the one deceived; it was the woman who was deceived and became a sinner” (1 Tim. 2:13-14). He recounts that Adam was created before Eve and implies that Eve sinned before Adam.

Jude refers to a prophecy of Enoch against the ungodly, “Enoch, the seventh from Adam, prophesied about them: See, the Lord is coming with thousands upon thousands of His holy ones to judge everyone, and to convict all of them of all the ungodly acts they have committed in their ungodliness, and of all the defiant words ungodly sinners have spoken against Him’” (Jude 14-15). So Jude confirms the genealogy of Genesis 5.

When the Pharisees asked Jesus about divorce, He replied, “Haven’t you read, that at the beginning the Creator ‘made them male (Adam) and female (Eve),’ and said, ‘For this reason a man will leave his father and mother and be united to his wife, and the two will become one flesh’? So they are no longer two, but one flesh. Therefore what God has joined together, let no one separate.” ‘Why then,’ they asked, ‘did Moses command that a man give his wife a certificate of divorce and send her away?’ Jesus replied, “Moses permitted you to divorce your wives because your hearts were hard. But it was not this way from the beginning (from the time of Adam and Eve). I tell you that anyone who divorces his wife, except for sexual immorality, and marries another woman commits adultery” (Mt. 19:4-9). In this passage Jesus quotes from Genesis 1:27 and Genesis 2:24, which in turn describe Adam and Eve as real people.

When Paul preached in Athens, he said, “The God who made the world and everything in it is the Lord of heaven and earth and does not live in temples built by human hands. And He is not served by human hands, as if He needed anything. Rather, He himself gives everyone life and breath and everything else. From one man (Adam) He made all the nations, that they should inhabit the whole earth; and He marked out their appointed times in history and the boundaries of their lands” (Acts 17:24-26). Paul referred to the creation of the world from Genesis 1, the creation of humanity from Genesis 2 and the nations from Genesis 10. He obviously believed that Adam was the first man and that these were real events.

Paul also mentions Eve in 2 Corinthians 11, “But I am afraid that just as Eve was deceived by the serpent’s cunning, your minds may somehow be led astray from your sincere and pure devotion to Christ” (2 Cor. 11:3). He was concerned that they would be deceived by false teachers like Eve was deceived in the Garden of Eden. He obviously believed that Eve was the first woman and that these were real events.

The method I have used to investigate whether Adam and Eve were actual people or just a mythical story to convey a message differs from the one used most commonly. I have studied what the Bible says about this topic, whereas others usually rely on scholarship outside the Bible. The problem with scholarship that is based outside the Bible (including literature and non-experimental historic science) is that it can change from year to year. What is claimed to be true now, will probably be discredited by future generations. Such knowledge is transient and changeable. And the interpretation of literary genres is very subjective. I prefer a more objective and robust approach that is based on Scriptural facts (the text of the Bible which is unchanging). The best way to interpret a Biblical passage is to investigate the text, the context, what the author says elsewhere and what other Bible authors say about the topic. This is the approach I have used in this post.

Depending on your worldview, you may not agree with my approach. But I think that a worldview based on revelation by the Creator of the universe is more reliable than one based on naturalistic human scholarship.

We have seen that the Old Testament Jews who complied scripture believed that Adam and Eve were real people (1 Ch. 1:1). As they lived over 2,400 years closer to these events, their interpretation of Genesis will be more accurate than any modern scholar.

The fact that Adam and Eve are historical people helps us understand our world. The Bible says that in the beginning God made a good creation which was spoilt by Adam and Eve’s sin. This resulted in suffering and death, which was followed by God’s offer of redemption and restoration. If we deny the cause of sin, then we deny the explanation of suffering and the need of salvation. Then sin and suffering are God’s fault and there is no prospect of relief.

Because Adam and Eve are historical people we are all their descendants and there is no biological basis for racism. We are all related. Paul said, “From one man (Adam) He (God) made all the nations” (Acts 17:26).

Paul sees Adam and Christ as history’s two most important figures. If Adam wasn’t historic, then there could be a tendency to think that Jesus wasn’t historic.

Therefore, we should also believe that Adam and Eve were real people and that the account about them in Genesis 1-5 describes real events. So Adam and Eve were actual people that lived on earth, and they were not symbolic or mythical nor did they come from someone’s imagination. They are literal and not literary.

This entry was posted on May 6, 2018 by George Hawke. It was filed under Christian, Creation, Spiritual and was tagged with Adam, bible, Eve, fact, fake news, fiction, Jesus, Moses, Paul, robust.