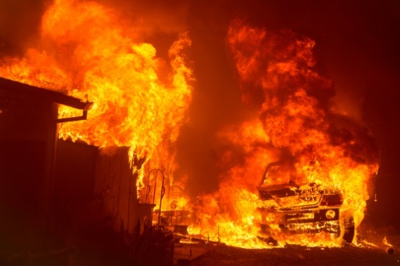 The Bible teaches more about hell than it teaches about heaven. An understanding of hell can give us an appreciation of God’s mercy and God’s love. It can also help us to understand how dangerous it is to be without faith in Christ. Not to be covered by the grace of God, heading towards a destiny the Bible calls hell. This blogpost is a summary of a presentation on this topic by Dr. Xavier Lakshmanan.

Johnathan Edwards preached a sermon titled “Sinners in the hand of the angry God”. He spoke about hell and human beings outside the covering of God’s grace in Christ Jesus, heading towards hell, which is a dangerous thing. Recently I saw a similar title, “God in the hand of angry sinners”. Postmodernity is witnessing the fact that God is thrown into the hands of angry sinners who are tearing apart everything that is noble, everything that is eternal, and everything that is miraculous. We are living in a world in which people do not want to talk about death or life after death or cemeteries or graveyards or corruptibility or decay or disintegration. These are things which aren’t favorable, positive or good. But we must talk about hell because the Bible talks about hell.

What do we mean by “hell”? It’s not life without the presence of God because He is there as the God of justice, righteousness, holiness and judgment. But there is no fellowship with God in hell. It’s a place of fire. It’s circumstances that aren’t normal or acceptable, or favorable or comforting, but are disturbing, or challenging or distracting. It’s eternal. A place of pain, thirst, and solitude. A place for Satan and his followers (demons and unbelievers).

There are some false ideas about life after death, such as the Roman Catholic teaching of purgatory where people are purified after death so they can go to heaven. And the theory of annihilationism, which is the destruction of the wicked after death. These are all extrabiblical.

The Old Testament word for hell is “sheol”. It is used for the unseen state of life; or a grave or pit; or torment. It’s meaning in a particular passage is determined by the context. In the New Testament the word “Gehenna” means a place of torment or a place of perpetual burning with fire. It implies agony, infliction and suffering. This conveys the eternal nature of hell and the experience within hell. The Biblical passages we will look at about Gehenna are horrifying. Much of this language uses figures of speech like parables, similes, metaphors, and symbols to describe things that are indescribable (like something spiritual or divine). Most of the passages about hell were spoken by Jesus. They are true because they were spoken by the Son of God and included in the Word of God (the Bible).

The Bible says the following about hell.

A passage about the eternal state says, “But the cowardly, the unbelieving, the vile, the murderers, the sexually immoral, those who practice magic arts, the idolaters and all liars—they will be consigned to the fiery lake of burning sulfur. This is the second death” (Rev. 21:8NIV). The fire and burning is a symbol of something in eternity. This “fire” can hurt the spiritual bodies of unbelievers.

When Jesus returns to establish His kingdom, He will separate those living at that time into believers and unbelievers. This is what Jesus will say to the unbelievers, “Then He [Jesus Christ] will say to those on his left, ‘Depart from me, you who are cursed, into the eternal [endless or everlasting] fire prepared for the devil and his angels” (Mt. 25:41). This says that hell was not originally intended for people. It was meant for Satan and demons. Unfortunately, it’s also the destiny of unbelievers.

Hell is eternal and the punishment there is everlasting. It’s not going to end. There is no mitigation. The Bible says, “then they will go away to eternal punishment” (Mt. 25:46). Not temporary purification (like purgatory). Not temporary sanctification. Not temporary considerations of suffering. Not annihilation. It’s continual. Forever and ever.

A place of fire

Jesus used a hyperbole to emphasize the need for drastic action to deal with our sinfulness, “It is better for you to enter life maimed than with two hands to go into hell, where the fire never goes out” (Mk. 9:43). Can you imagine a place full of fire? An “eternal fire” (Mt. 18:8). This is figurative language from Isaiah 66:24. We can’t image how horrible it will be. But that is what the Bible says.

In August 2018 a national disaster was declared in Northern California due to massive wildfires burning there. And in September 2018, a wildfire forced more than 700 people from their homes in Croatia and Italy. It’s horrifying to be trapped in a wildfire.

A place of worms

Jesus used another hyperbole to emphasize the need for drastic action to deal with our sinfulness, “It is better for you to enter the kingdom of God with one eye than to have two eyes and be thrown into hell, where “‘the worms that eat them do not die, and the fire is not quenched’” (Mk. 9:47-48). This is more figurative language from Isaiah 66:24. It relates to the garbage dump in the valley of Hinnom (Gehenna in Greek) near Jerusalem where fires and maggots were prevalent. The second (eternal) death is likened to being devoured by worms that never die. It could be a figurative way to refer to a guilty conscience and the memory of shameful things done in this life. It shows that the misery of unbelievers will never end. Hell is characterized by unending suffering.

A place of torment

The Bible says that those who oppose God will be “tormented with burning sulfur” (Rev. 14:9-10). And Satan “will be tormented day and night for ever and ever” in the lake of burning sulfur (Rev. 20:10). Torment means mental agony. No celebration. No peace of mind. What a terrible situation to be in forever.

A place for Satan

We have already looked at, “the eternal [endless or everlasting] fire prepared for the devil and his angels” (Mt. 25:41). Hell wasn’t originally meant for human beings. It was prepared for the angel who rebelled against God. God doesn’t like human beings to be confined in hell. God is gracious. He died for all the people of the world. And He loves each one of us. And He wanted everyone to be with Him in heaven. But unfortunately, if someone rejects the gift of salvation, this is their final destiny.

The Bible says that the great political and religious leaders who rebel against God in a coming day will be “thrown alive into the fiery lake of burning sulfur” (Rev. 19:20). So, Hell is a place where Satan and his followers, whether they be demons or human beings, end up being tormented forever. There’s no escape. It’s permanent confinement.

If you are a believer, confirm your personal commitment to Christ by displaying godliness and the fruit of the Spirit (2 Pt. 1:10). Strengthen yourself. We are not heading to hell. Hell is not a fearsome thing for a believer. But we are heading to heaven where the joys of heaven will carry us through eternity. And “Preach the word [the good news about Jesus]; be prepared in season and out of season” (2 Tim. 4:2). Remember many people are heading towards hell. Make use of every opportunity to witness for Christ. We don’t want anyone to perish in hell.

If you an unbeliever, or if you are unsure, Paul says, “If you declare with your mouth, ‘Jesus is Lord’, and believe in your heart that God raised Him from the dead, you will be saved” (Rom. 10:9). Trusting Jesus as the One who took our punishment when He died and is now the Lord of our lives is the only way to escape the horrors of hell.

Acknowledgement: This blogpost was sourced from a presentation by Dr. Xavier Lakshmanan on this topic. Dr. Lakshmanan is Head of Theology in the Australian College of Christian Studies.

Also see:  Heaven and hell” What is hell like?
Where’s hell?

This entry was posted on October 20, 2018 by George Hawke. It was filed under Christian, heaven, Spiritual and was tagged with bible, death, destiny, devil, eternal, fire, hell, Satan, torment.