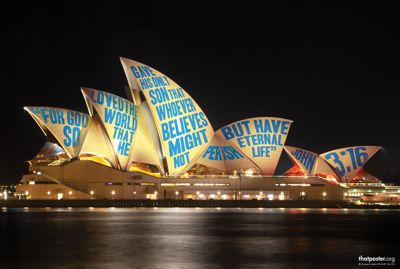 Apparently, around the world, the Sydney Opera House is more famous than Australia itself. Whether in sparkling sunshine or on a luminescent night, the vision of the Opera House, with its brilliant harbor setting, has come to represent both a spirit of unflinching boldness and a quest for architectural purity. It features regularly, along with the Pyramids of Giza, the Taj Mahal and the Empire State building, in top ten lists of the most important and famous buildings of all time.

Recently, Australia’s new Prime Minister, Scott Morrison, with his background in marketing, said it was, “the biggest billboard Sydney has”. His insight came amidst a public furore over whether a new horse racing event should have its ‘barrier draw’ splashed across the buildings sails.

The issue really ignited when radio shock jock, Alan Jones, got involved. With interests in the racing industry reportedly in excess of $20 million, Jones threatened and bullied the Opera House CEO, Louise Herron, declaring he’d get the Premier to overrule her that day if she didn’t agree to the display. That same day, the New South Wales Premier did just that.

Sydney has always been a venal city of jostling egos where confected outrage masks vested interests. In Sydney big gambling happily feeds on the suffering of failing families addicted to pokies and ponies. The taxes and donations reaped from both are so huge that Governments dare not reign them in. Indeed, successive governments have been thoroughly compromised and cowed.

So, despite the sparkling lure of Sydney Harbor and its world famous, world heritage listed Opera House, Sydney is a place that desperately needs God. Whether by day or by night, it needs God in its soul. And the most precious, important thing that God can give – indeed has given, is His dear Son Jesus.

If the Opera House truly is a billboard to the world, then how fitting that God’s offer of a fresh start be writ large on its sails.

Bible verse: John 3:16, “For God so loved the world, that He gave His only Son, that whoever believes in Him should not perish but have eternal life”.

Prayer: Dear God, thank you for being willing to forgive anyone for anything. Help us to realize just how great the gift of eternal life is that’s available through your Son.

This entry was posted on October 23, 2018 by George Hawke. It was filed under Christian, Gospel, Spiritual and was tagged with billboard, fresh start, gambling, Jesus, Opera house, Outreach Media, Sydney.