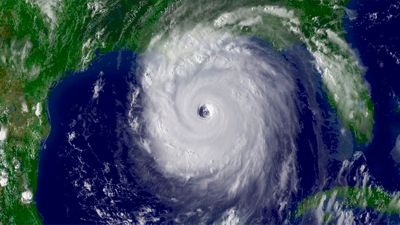 Hurricanes bring strong winds, heavy rains, floods, storm surges and even tornadoes (Appendix A). Hurricane Michael which struck the coast of Florida in October 2018 was the third-strongest hurricane in continental U.S. history. It’s landfall pressure was 919mb, which was slightly stronger than the 920mb of Hurricane Katrina that flooded New Orleans in August 2005. The 2017 Atlantic hurricane season was the costliest tropical cyclone season on record with a damage total of at least $US300 billion and over 3,300 estimated deaths.

When do you think of God? What reminds you of Him? A thunderstorm reminded David of God’s awesome power.

Psalm 29 has been categorized as a nature psalm. These psalms praise the Lord as the creator and sustainer of the physical universe. God is separate from nature because He created it. This made Jewish beliefs different to the common beliefs of ancient times that various objects in nature are divine. Just think about the gods of Egypt, Canaan, Greece and Rome. The theological description is that God is “transcendent”, which means He is independent of the creation. But the creation (nature) is also sustained by His mighty power; He sustains “all things by His powerful word” (Heb. 1:3NIV). And the creation (nature) declares (shows) God’s greatness (Ps. 19:1). Psalm 29 says,

It’s a Jewish poem that was sung. The key-word in the psalm is “the Lord”, which occurs 18 times. And there is repetition and parallelism.
Repetition: In v.4 “the voice of the Lord” is repeated.
Parallelism: In v.4 there is parallelism between “powerful” and “majestic”. Both describe the voice of the Lord, and the second word adds to the first.

Next, David likens the strength and power of the Lord to a mighty thunderstorm. 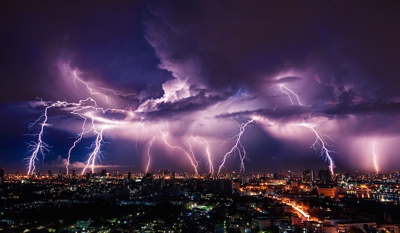 This section describes the cause (or reason) for the praise. God’s power is depicted in a metaphor as a thunderstorm. The thunderstorm comes from over the Mediterranean Sea and moves across northern Israel (v.3), to the mountains of Lebanon  (v.5-6), until it passes into the Syrian desert (v.8). God’s awesome power is not only visible in creation (nature), it is also audible in thunder. David also wrote, “God thunders with a mighty [powerful] voice” (Ps. 68:33).

“The voice of the Lord” is mentioned seven times, referring to thunder (v.3-4, 8), lightning (v.7), and the strong wind (v.5-6, 9) of the storm. Here God’s presence is depicted in a metaphor and personification as His voice.

Did you know that insurance companies agree with David when they call storms an act of God! Storms are outside our control. We cannot stop them. And we cannot adequately prepare everyone for them. Storms have more power than any human creation. But they are under God’s control. Although we can explain these storms today from a meteorological perspective, they are still under God’s complete control. God is sovereign – everything is under His control.

Finally, the God who has strength (v.1), gives strength to His people (v.11a). And He blesses His people with peace (v.11b). This is comforting to those who feel weak or are going through troubles.

God has awesome power because He controls all the forces of nature. Other demonstrations of God’s power are His creation of the universe, Jesus’ miracles and Christ’s resurrection from the dead. It’s comforting to know that everything is under God’s control.

Hurricanes are large rotating tropical storms with winds in excess of 120 km/hr (74 mph) that form above the Atlantic Ocean. They are known as typhoons in the western Pacific and cyclones in the Indian Ocean. For a storm to gain enough energy to develop into a hurricane, the temperature of surface waters needs to rise above 26⁰ C (79⁰ F). Meteorologists classify the strength of a hurricane using the Saffir-Simpson Scale. It consists of five categories, based on wind strength: 1 is the weakest and 5 is strongest, with winds exceeding 250 km/hr (156 mph).

Its center is a cloud-free, relatively calm area called the eye. The eye is surrounded by the much more active eye wall, a ring of thunderstorms where the hurricane’s winds are the strongest and rains are the heaviest. Spiral bands of clouds, rain, and more thunderstorms extend out from the eye wall like a pinwheel on top of a rotating funnel. These rain bands can stretch for hundreds of miles and sometimes contain tornadoes.

Did you know that the winds that blow around these severe tropical storms rotate in a clockwise direction in the southern hemisphere and an anti-clockwise direction in the northern hemisphere? This is caused by the rotation of the earth and is called the Coriolis Effect. Because we are within a rotating coordinate system, objects moving long distances appear to deviate towards the left in the southern hemisphere and towards the right in the northern hemisphere. This inertial force is called the Coriolis force. It’s zero at the equator. The magnitude of the Coriolis force is proportional to the speed of the object and the sine of the latitude. This force is a bit like the centrifugal force that you feel in a roller coaster ride when the roller coaster goes sideways or across a hill or valley.

Hurricane winds can uproot trees, and storm surges can carry salt water up inland rivers, harming or killing plants and animals that cannot tolerate salt. High tides can easily wipe out sensitive sea turtle and bird nests along shorelines. Violent wave action kills many fish. Coastal waters that typically nourish seagrass beds—home to crabs and fish—can grow clouded and toxic with sediments and pollutants. The drop in air pressure resulting from a hurricane often disorients manatees (sea cows) and dolphins. On the other hand, sharks can detect the drop and safely head for deeper waters. Whereas some birds detect the pressure shift and escape in advance of storms or safely weather them on the ground, others can be thrown far off course or get trapped in the eye of a hurricane. But some frogs and toads breed more in heavy rainfall; and some plants use the wind to spread their seeds.

Appendix B: Verse 9a

According to the NET Bible this line is, “The Lord’s shout bends the large trees”. The Hebrew version states that it bends “the deer”. “Preserving this reading, some translate the preceding verb, “causes [the deer] to give premature birth” (cf. NEB, NASB). But the Polel of חוּל/חִיל (khul/khil) means “give birth,” not “cause to give birth,” and the statement “the Lord’s shout gives birth to deer” is absurd. In light of the parallelism (note “forests” in the next line) and v. 5, it is preferable to emend אַיָּלוֹת (ʾayyalot, “deer”) to אֵילוֹת (ʾelot, “large trees”) understanding the latter as an alternate form of the usual plural form אַיָּלִים (ʾayyalim).”

This entry was posted on April 9, 2019 by George Hawke. It was filed under Christian, Old Testament, Spiritual and was tagged with awesome, cyclone, David, God, hurricane, power, praise, Psalm 29, thunderstorm, tornado.