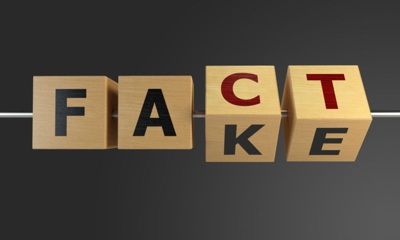 In social media it’s often hard to tell what’s real and what’s scripted. Storytellers often exaggerate the truth, embellish to make a point, and lie to make an imprint on people’s minds. The lines between fact and fiction are fuzzier today than ever before. Our information sources have multiplied and our stories arrive faster and with considerable urgency. And with all the noise, there is a greater opportunity for embellishment. While stories do not need to be real to be effective, they can be more effective if the truth (or the fiction), is disclosed upfront.

The most popular scientific explanation of the universe is that it has developed over billions of years. This is called the big bang model. But the first chapter of the Bible says that the universe was created in six days! In order to resolve this difference some say that Genesis 1 is mythical. A mytho-historical genre (literature style) is one where a grain of truth (the historical part) is embellished to convey some spiritual truth (the mythical part). In this case it’s assumed that the text is not to be read as literal history. It conveys a sense of truth about origins, but not a literal description of actual events. For example, the days of creation may represent long geological periods in deep time. And the biblical creation week is taken to be a figurative expression for gradual changes which occurred on the earth, perhaps millions or billions of years ago. But who decides what part is historical and what part is myth? And who decides what the myth means? This is a very subjective method of interpreting the Bible.

When I looked at “Genesis 1-11: Fact or fiction”, I found that:
“The Bible was written to be understood by ordinary people, so it shouldn’t be difficult to interpret. We have seen that Genesis 1-11 is not figurative language, poetry, parables, a historical novel or a myth. But it is a biography and an autobiography that describes real historical people and real historical events. It is prose narrative, with some embedded pieces that are poetic (Gen. 1:27; 2:23; 4:23-24) and some genealogical records (Gen 5, 10, 11:10–26). And it differs from other near eastern cosmologies because they are poetic and polytheistic. The writers of the Bible affirm that Genesis 1-11 is fact not fiction. It is an account of real events. Jesus affirmed it as well. And the gospel is based on the historicity of the early chapters of Genesis. So, Genesis 1-11 isn’t a type of doublespeak where words don’t have their usual meaning.”

This post looks at the literary style of Genesis 1.

The big question is, what type of literary genre is the creation account in Genesis 1? It has been translated in our Bibles as a straight forward historical narrative, which is how it has traditionally been taken. But what does a linguistic study show?

Sarfati (2015) reports,
“To test whether Genesis 1:1 – 2:3 is historic or poetic, Hebrew scholar Dr Stephen Boyd (Calvary University) statistically analysed the verb forms of this passage and compared this with a wide selection of other Old Testament passages. In particular, he counted each of the four finite Hebrew verb forms (preterite [waw-imperfect], imperfect, perfect and waw-perfect; Appendix A) in Genesis 1:1 – 2:3 and 96 other passages–including 47 narrative and 49 poetic passages. Boyd showed that preterite (waw-imperfect) verb forms clearly dominate the narrative passages (Appendix B), while perfect and imperfect verb forms clearly dominate the poetic passages (with two exceptions; see below). Using logistic regression–a technique commonly used to make predictions when two choices are involved–Boyd was able to classify each of the texts as narrative or poetry depending on its distribution of preterites (waw-imperfects). In the case of Genesis 1:1 – 2:3, it was statistically classified as narrative with a probability of 0.9999. Since probabilities range from 0 (impossible) to 1 (certainty), this analysis showed that Genesis is almost certainly historical narrative and not poetry.” 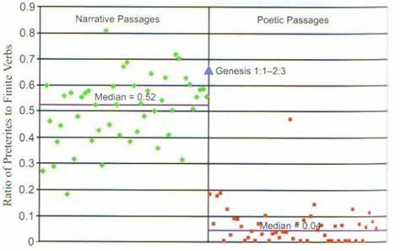 Boyd found that the median ratio in the Old Testament of preterite (waw-imperfect) verbs to all four finite verb types was:
– 0.52 for narrative passages, and
– 0.04 for poetic passages.
And the same ratio for Genesis 1:1 – 2:3 was 0.66, which is indicative of a narrative passage. This is not surprising because all but v.27 of Genesis 1 is written in prose.

There were two exceptions to this Hebrew verb pattern. Exodus 33 (with a ratio of 0.18), which contains a large number of future references that are indicated by the use of the imperfect verb form. And, Ezekiel 19 (with a ratio of 0.47), which is an apocalyptic passage and describes kings of Judah with highly figurative language. Genesis 1:1 – 2:3 has none of the features of these two passages.

So, most of the ancient Mesopotamian creation myths were written in a poetic genre. But our linguistic analysis of Genesis 1:1 – 2:3, showed that except for v.27 it was prose and not poetic. So the genre of Genesis 1 is not the same as that of ancient creation myths (which are poetic and polytheistic). This means that the linguistic evidence points to Genesis 1 being a historical narrative and not a mytho-historical literary genre (like a creation myth).

Some other passages written by Moses in the Pentateuch support the above interpretation of the literary genre of Genesis 1. In the fourth commandment, the Israelites were required to keep the 6th day of the week holy (Ex. 20:8-9). They were to do all their work on 6 days of the week, but not work on the 7th day of the week. This was supported by the statement that,“For in six days the Lord made the heavens and the earth, the sea, and all that is in them, but He rested on the seventh day” (Ex. 20:11). Moses compared the week of 6 days work and one day rest with the creation week of 6 days creation and one day of rest. Clearly Moses believed they were both a week comprised of seven consecutive 24-hour periods.

And 12 numbered days are listed consecutively with regard to the offerings at the dedication of the tabernacle; one for each tribe of Israel (Num. 7:12-83). Like Genesis 1, this chapter is highly structured. But it is a factual historical narrative and not a myth. Similarly, Genesis is factual and not a myth.

However, critics may still claim that Genesis and the rest of the Old Testament contain non-literal stories of history. To counter this challenge, consider three distinct features of Old Testament narratives in general (Boyd. 2015). They verify that the biblical authors of narrative portrayed real historical events.

The world’s greatest Hebrew scholars all affirm that the Genesis account of creation is narrative. It’s different to the other ancient Near Eastern accounts of creation which are written as epic poetry. In fact, Hebrew narrative in the Bible is never fictional (or mythical); it’s always historical. And Hebrew poetry is not necessarily fiction (Appendix C).

Biologos claims that “Genesis is theological history and uses figurative language in some of its descriptions”. By “theological history”, I assume they infer that it doesn’t necessarily describe real events (or is largely fiction). But the Bible is a selective record (or history) of God’s dealings with humanity. This means that it is both theological and real history. You could say that the gospels are “theological history”. Does this mean that the account of the life of Christ is fiction? Frances Shaeffer said, “God has set the revelation of the Bible in history; He did not give it (as he could have done) in the form of a theology text book”.

Biologos also claims that “The author of Genesis is not interested in telling us how God created (in material terms) or how long it took”. But the text says that God spoke everything into existence. And Genesis 2 states that Adam, the animals, and the birds were made from the earth, and Eve was made from Adam’s rib. Also, the description of the creation is listed in an ordered sequence from day 1 to day 6. So there is some information about how God created (in material terms). And the Bible clearly says how long it took; 6 days (Gen. 1; Ex. 20:11 ;31:17). But Biologos calls them “literary days”, whatever that may be! They claim that the first three days weren’t 24 hours because the sun, moon and stars weren’t mentioned until day 4. But the first day is described in the Hebrew language as, “There was evening and there was morning: one day” (Gen. 1:5CSB, NASB). This verse defines the word “day” to mean an evening and a morning (24-hours). The day-night cycle was instituted from day 1; before the sun was created. The Bible says that God created light and the earth on the first day. All it takes to have a day-night cycle is a rotating earth and light coming from one direction. So we can deduce that on day 1 the earth was rotating in space relative to this created light.

As I said earlier, “If you expect to find fiction, you will find fiction”. And that’s what Biologos claim to find, which is a reflection of their worldview (or bias).

The distribution of finite verbs in Hebrew narrative writing in the Old Testament differs distinctly from that used in poetry. A statistical analysis of these verbs shows that Genesis 1:1 -2:3 is historical narrative and not poetry (or figurative). This means that it describes real historical events and it is not fiction.

The implication is that God created everything during six 24-hour days and not over eons of time.

Appendix A: A summary of the finite verb forms used in biblical Hebrew (Boyd, 2005).

The finite Hebrew verbs are those having different forms or inflections for person (I, you, he, they), gender (masculine, feminine), and number (singular, plural). There are four finite verb forms in biblical Hebrew. These are given the names preterite (waw-imperfect), imperfect, perfect, and waw-perfect. Each describes a particular type of action (see below).

The comment column summarizes the general verb usage. Phrases with English and Hebrew examples are included on the right side. 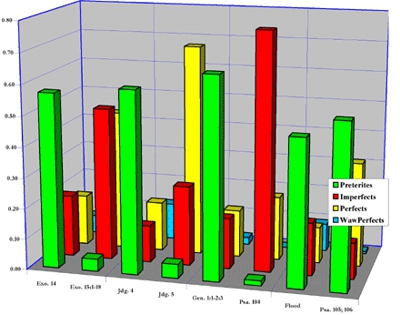 Preterite (waw-imperfect) verbs dominate in narrative passages and are rare in poetic passages.

When I looked at “Genesis 1-11: Fact or fiction”, I found that:
“Just because a passage is poetic doesn’t mean that it’s fiction. Poetry is merely a literary form. On its own, it has nothing to do with whether the content is fact or fiction. It may or may not reflect a historical background. Many poetic portions of scripture relate to genuine history (Num. 24; Ps. 148; 1 Tim. 3:16b). And these are acknowledged as being divine in origin and authoritative in force (Ps. 82:6; Jn. 10:34)”.

For example, in Exodus 15 Moses and Miriam recorded the Israelite crossing of the Red Sea in poetic form for the Israelites to sing, to remember and to worship the Lord on the basis of this great historic salvation event. Since most Israelites did not have access to written records, this was a good way for them to remember and review their history for future generations.

This post has been reviewed by Dr Theron Young of the Australian College of Christian Studies.