Take a closer look at Easter

If we took a closer look at Easter, what would we find – a chocolate fantasy or important history?

In the 8th Century, the English monk, Bede, spoke of how the name of the pagan goddess ‘Eostre’ was used for the ‘Easter month’. Bede’s words have long been seen as proof that Christians simply replaced existing cultural rituals with their own. But the problem is that there isn’t much hard evidence for the English Goddess ‘Eostre’ or her Spring pagan festival. However, there’s lots of evidence that Christians throughout Europe, from the medieval period onward, used eggs and rabbits as symbols of new life.

As for the chocolate versions, well Joseph Fry of Bristol made the first chocolate Easter egg in 1873. Ever since then Easter has been very chocolaty and run, almost entirely by the major supermarkets. END_OF_DOCUMENT_TOKEN_TO_BE_REPLACED

From the cross to the crown

At Easter we remember the death and resurrection of Jesus Christ, events unique to the Christian faith. In this article we will look at what happened after His resurrection, and at four contrasts between His death and heavenly reign. 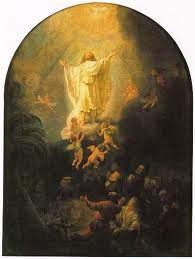 After Christ’s resurrection, He appeared to His followers over a period of 40 days (Acts 1:3). Then “He was taken up into heaven and He sat at the right hand of God” (Mk. 16:19 niv). Luke reported, “He was taken up before their very eyes, and a cloud hid Him from their sight. They were looking intently up into the sky as He was going, when suddenly two men dressed in white stood beside them. ‘Men of Galilee,’ they said, ‘why do you stand here looking into the sky? This same Jesus, who has been taken from you into heaven, will come back in the same way you have seen Him go into heaven’” (Acts 1:9-11). The disciples were given a promise by two angels that in the future Jesus would return to earth in an event as spectacular as His ascension.

People sometimes say this was the greatest comeback since Lazarus because Lazarus came back from the dead, but died again because he was still mortal. But the resurrected Lord had a redeemed immortal body. He was the first to be resurrected to eternal life (1 Cor. 15:23). His was a different resurrection because He ascended into heaven to live forever. That’s a much greater comeback than Lazarus. In fact, Jesus went from the lowest place on earth, where He endured the suffering and humiliation of execution as a criminal, to the highest place in heaven, where He reigns over all creation. What a contrast!

Two types of crown are mentioned in the New Testament: a garland worn by a victorious athlete, and a diadem worn by royalty that symbolized the power to reign. Both of these crowns are used in the Bible to describe Jesus. Crowns are also mentioned in respect to His cross and reign.

Crown of thorns. Humanity, by way of the Roman soldiers, gave Christ the crown of thorns (Mt. 27:27-31; Mk. 15:16-20; Jn. 19:2-5), a purple robe and a staff in a mock coronation of the “king of the Jews.” Thorns are a product of the curse, which was God’s judgment on humanity’s fall into sinful behavior (Gen. 3:17-19). In Genesis thorns are associated with sin, struggle, sweat and death. At the cross, Christ had a symbol of the curse on His head.

Crown of glory. “We … see Jesus, who was made lower than the angels for a little while, now crowned with glory and honor because He suffered death, so that by the grace of God He might taste death for everyone” (Heb. 2:9). He was lower than the angels for 33 years. At His death He was the lowest of humanity, executed as a criminal. He came down to the cross and the grave. Now He is crowned with glory and honor, His exaltation a result of His suffering. The cross led to the crown. His glory was the reward of His suffering (Heb. 2:9; Phil. 2:7-9; Rev. 5:12). Seeing Jesus in His glory will give us great joy (Jn. 17:5,24).

Jesus prayed, “I have brought You glory on earth by finishing the work You gave Me to do. And now, Father, glorify Me in Your presence with the glory I had with You before the world began” (Jn. 17:4-5). Before He came to earth, He lived with the Father in heaven and reigned over all creation as the Creator. He regained this when He ascended, but gained the additional glory of being the Redeemer of the fallen creation. So, at the cross, He was given the crown of thorns, but when He ascended to heaven, He was given the crown of glory.

The Lord was here once, and He’s coming again – the invisible God visibly present on earth. The purpose for His first coming was to die on the cross for sinners like us; to be a sacrifice. The purpose for His second coming will be to reveal His great power and glory (Mt. 24:30; 2 Th. 2:8; Rev. 1:7). It is the most prophesied event in the Bible. At that time, He will wear the crown of authority, dominion, government and sovereignty, judge all evil and set up His kingdom on earth. That is when all the wrongs done on earth will be made right, all crime will end, and justice will prevail.

In His first coming the Lord entered Jerusalem on a donkey. In His second coming He will be on a war horse: “I saw heaven standing open and there before me was a white horse, whose rider is called Faithful and True. With justice He judges and wages war. His eyes are like blazing fire, and on His head are many crowns” (Rev. 19:11-12). His supremacy is emphasized by His wearing “many crowns.”

Although Christ’s suffering and glory were both foretold in the Old Testament, their relationship was not obvious at that time. Psalm 22:1-21 describes the Lord’s suffering. For example, “My God, My God, why have you forsaken Me? Why are you so far from saving Me, so far from My cries of anguish?” was spoken at the cross (Ps. 22:1; Mt. 27:46). Psalm 22:22-31 describe His millennial reign over the earth. For example, “All the ends of the earth will remember and turn to the LORD, and all the families of the nations will bow down before Him, for dominion belongs to the LORD and He rules over the nations” (Ps. 22:26-27). We see in the same passage the cross and the crown; the suffering and the glory.

Likewise, “For to us a child is born, to us a son is given” (Isa. 9:6) describes Christ’s first coming which led to the cross, while the rest of this verse and the next describes the millennial kingdom established after His second coming: “And the government will be on His shoulders. And he will be called Wonderful Counselor, Mighty God, Everlasting Father, Prince of Peace. Of the greatness of His government and peace there will be no end. He will reign on David’s throne and over his kingdom, establishing and upholding it with justice and righteousness from that time on and forever.” Once again we see in the same passage the cross and the crown; the suffering and the glory. Other references to the Lord’s suffering and reign are Isaiah 53 and Psalm 110.

Christ’s cross and crown are keys to understanding the Bible. And aspects of His sacrifice and death for sinners, and His kingdom and future glory can be seen in many passages of Scripture. “Concerning this salvation, the prophets, who spoke of the grace that was to come to you, searched intently and with the greatest care, trying to find out the time and circumstances to which the Spirit of Christ in them was pointing when He predicted the sufferings of Christ and the glories that would follow” (1 Pet. 1:10-11). The Old Testament prophets predicted the Lord’s sufferings and the glories that would follow, but they didn’t know that there would be thousands of years between these events.

Christ’s mission was to go to the cross to die for our sin. Now, having paid the price for sin, He is highly exalted at God’s right hand and will come again as King of kings and Lord of lords. His cross had to precede His crown: “He humbled Himself by becoming obedient to death – even death on a cross! Therefore God exalted Him to the highest place and gave Him the name that is above every name, that at the name of Jesus every knee should bow, in heaven and on earth and under the earth, and every tongue acknowledge that Jesus Christ is Lord, to the glory of God the Father” (Phil. 2:8-11).

Jesus went from the lowest place on earth (the cross) to the highest place in heaven where He reigns over all creation. What a change there is between His two comings to earth – from crown of thorns to crown of glory, from criminal to the redeemed, from death to dominion, and from suffering to glory.

Because Jesus endured the cross, He now wears the crown and we can have the assurance of eternal life with Him in heaven. For Jesus, suffering had to precede glory. The New Testament pattern of suffering followed by glory applies to us as well: believers suffer now, but will be released into the glory of immortal bodies at the resurrection (Rom. 8:16-25; 2 Cor. 4:16-18). Like the Lord, believers must be willing to suffer and lose their lives for His sake (Lk. 9:23).

Paul wrote, “if we are children, then we are heirs – heirs of God and co-heirs with Christ, if indeed we share in His sufferings in order that we may also share in His glory. I consider that our present sufferings are not worth comparing with the glory that will be revealed in us” (Rom. 8:17-18). Meanwhile, “our light and momentary troubles are achieving for us an eternal glory that far outweighs them all” (2 Cor. 4:17).

The Biblical pattern is that suffering in this life will lead to an inheritance of eternal glory. We should not be focusing on our present physical situation, but be looking ahead. We are not promised a trouble-free life; in fact the opposite is the case because Jesus tells us that trouble is inevitable (Jn. 16:33). Look at His life as an example, and focus on the One who went to the cross and who now wears the crown.

See the other article in this series:
– From the Cradle to the Cross

The Raven And The Kookaburra

I spent Easter in the mountains with plenty of trees and birds. Two of the birds, the kookaburra and the raven reminded me of Christ’s victory over Satan. They are birds of prey, each with a distinctive call.

The Australian raven is glossy black with a fierce, menacing look. It has a high-pitched wail “aah-aah-aah-aaaahh.” Some find this call threatening. Ravens prey on reptiles, rabbits, chickens, ducklings, refuse and carrion. They can also hasten the death of weak sheep and lambs.

The laughing kookaburra is the world’s largest kingfisher. It has a loud chuckling laugh, “koo-koo-koo-koo-koo-kaa-kaa-kaa.” When the kookaburra laughs, it’s claiming a territory to share with family members. It lives mainly on insects, worms, lizards, frogs, mice and small birds. Kookaburras can also kill snakes.

The kookaburra reminds me of Jesus. It attacks and kills snakes. In the Bible snakes are a metaphor for Satan (Rev. 12:9; 20:2). By His death and resurrection, Christ destroyed Satan, like a kookaburra destroys a snake (Gen. 3:15; Heb. 2:14). In fact, “the reason the Son of God appeared was to destroy the devil’s work” (1 Jn. 3:8 NIV). Satan has been fatally wounded and defeated, to be tormented forever in the lake of fire (Rev. 20:7).

May this brief look at the raven and the kookaburra help us to be more aware of Satan’s schemes, and to celebrate Christ’s victory.