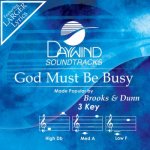 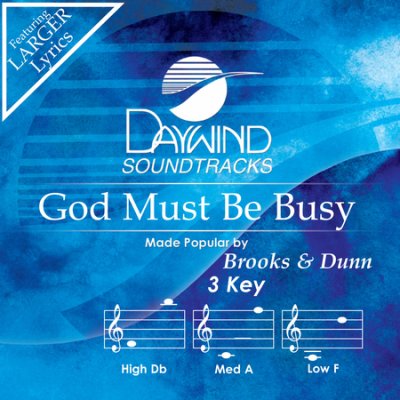 There’s a country music song by Brooks and Dunn titled, “God must be busy”. It mentions fighting in the Middle East, a single mum who lost her job, people dying and missing in a tornado, the abduction of a young girl, a drought, elderly people who can’t afford their medication, and violent street gangs. The writer feels as small as a speck of sand and that God’s got better things to do than to help them. They think that God hasn’t answered their prayer because “God must too be busy to help me”. This is an example of those who say they don’t want to bother God about their problems because He’s too busy running the universe.

In a class I’ve been attending at Bible College we’ve been looking at what the Bible says about God. This includes God’s attributes (His character) and God’s actions. His attributes can be summarized as: God is great and God is good. An example of His greatness is His power and an example of His goodness is His love. Of course God is much greater than we can imagine and more virtuous than we can imagine.

But what does God do? In this blogpost we are looking at what God does. His actions. And we will see that in the past God has planned and created, but now He sustains and governs His creation.

Like an architect designs a building, and an engineer designs a car, and a graphic artist designs an animated movie and a sculptor designs a pot, God has planned everything that will happen (Rom. 9:20-23). Like the plan begins in the mind of the architect, the engineer, the graphic designer, and the sculptor; the plan also begins in the “mind” of God. He decides. It’s His will. When we say “God’s will”, we mean “God’s plan”.

We don’t know much about God’s plan. Only what’s revealed in the Bible. We see what happens, not why it happens.

First, God’s plan included creation. It was God’s idea. God didn’t have to create, but He did.

Second, God’s plan includes the history of nations and individuals. For example:
– God used Assyria to punish ungodly nations, “Have you not heard? Long ago I ordained it. In days of old I planned it; now I have brought it to pass, that you have turned fortified cities into piles of stone” (Isa. 37:26NIV). It says that God planned it long ago. God also determined the beginning, the end and the area occupied by nations (Acts 17:26).
– David says that our life span and its events have been already determined by God, “Your eyes saw my unformed body; all the days ordained for me were written in your book before one of them came to be” (Ps. 139:16).

Third, God’s plan included salvation (Eph. 1:11). God gave a promise to Abraham, and through him to humanity. This promise-plan is fulfilled in the history of Israel, in Jesus Christ as the source of salvation, in the church, and in the age to come (Kaiser, 2008). God wanted to have people become like Himself, so He could enjoy their fellowship (Rom. 8:29; 1 Jn. 3:2). Jesus was sent on a mission at a time that was determined beforehand (Gal .4:5-5). The death of Jesus was part of “God’s deliberate plan” (Acts 2:23). God decided beforehand what happened (Acts 4:28).

When did God do this planning? The Bible says that it was “before the beginning of time” and “before the creation of the world” (Eph. 1:12; 2 Tim. 1:9; 1 Pt. 1:20). So it was made before anything was created. When the triune God was all that existed. In eternity past.

But God’s work is more than planning; He also creates.

God brought everything that exists into being without the use of pre-existing materials. God created time, the physical world of matter, forces and energy out of nothing. He also made the spiritual world of angels. God created things from what He created earlier. For example, He made animals, birds and Adam from dust and Eve from Adam (Gen. 2:7, 19, 21). There was nothing evil within God’s original creation (Gen. 1:31). And through the laws of genetics, variations can be created within the various types of creatures that God created. This limited variability helps creatures survive changes in their environment.

Creation is emphasised at the beginning of the books of Genesis, John and Hebrews. The Bible says that God created the world for His glory (Ps. 19:1; Isa. 6:3; 43:7; Rom. 1:20-21). In heaven, God the Father is praised, “You are worthy, our Lord and God, to receive glory and honor and power, for you created all things, and by your will (God’s plan) they were created and have their being” (Rev. 4:11).

But God’s work is more than planning and creating; He also sustains.

The whole creation belongs to God and matters to Him. He cares for it. God sustains and preserves the creation He has brought into being. This means that God is active in creation (nature) and in our lives. Without God’s sustenance, nature would cease to be. It’s like driving a car without using cruise control. The driver needs to keep pressing on the accelerator pedal to make it go and to keep it going.

The Bible says, “In Him (Christ) all things hold together” (Col. 1:17). And Jesus is “sustaining all things by His powerful word” (Heb. 1:3). The fundamental forces of nature are gravity, electromagnetism, and nuclear forces. Gravity holds the universe together, keeps planets in orbit and keeps the atmosphere, water, and us on planet earth. Electromagnetism keeps electrons in orbit around the atomic nucleus and binds atoms to one another to form molecules and compounds. And nuclear forces hold the nucleus of an atom together. Scientists believe that these forces are related, but they don’t know how. But we know how – Jesus holds all things together! He’s the common power.

God also sustains humanity. We are in His care (Dt. 31:6). Jesus said that all the hairs of our head are numbered (Mt. 10:30). In Athens, Paul said that God “gives everyone life and breath and everything else” (Acts 17:25). Also, Christians are sustained through suffering. Writing from prison, Paul said that God will meet all our needs (Phil. 4:19).

But God’s work is more than planning, creating and sustaining; He also governs.

God has planned what is to occur and history is carrying out His intention. He works behind the scene so that events fulfil His plan. History is moving towards a definite goal. This means that God is active in history. God directs history. For example, God controlled:
– Nature when Elijah said it wouldn’t rain and there was a drought for 3.5 years (1 Ki. 17-18; Lk. 4:25; Jas 5:17).
– The rise and fall of nations (Dan. 2:21; Acts 17:26).
– Events in the lives of individuals. Hannah praised God, “The Lord brings death and makes alive; He brings down to the grave and raises up. The Lord sends poverty and wealth; He humbles and He exalts” (1 Sam. 2:6-7). David said, “my times are in your hands (Ps.31:15). And Paul realized that even before his birth, he had been set apart by God for a special work (Gal. 1:15-16).

Two illustrations come to my mind. SimCity is a city-building computer game, which was released in 1989. A person building a city in SimCity is like God directing history. And it’s like 3D virtual reality. Monash University have developed a virtual civilization of Angkor Wat in Cambodia as it was 1,000 years ago. 25,000 computer people are animated to perform tasks as four classes of people: residents, commuting workers, suppliers and visiting elites. Virtual reality gives audiences a sense of time and place. In real life it’s God who is directing history, and not a digital animator.

The government of God is when He directs the course of events to fulfil His purposes. For example, look at the history of the Jews. Although their future was threatened in Egypt, in Babylon, and in the holocaust, God has preserved them as a nation.

Meanwhile, He is preparing a place in heaven for the redeemed (Jn. 14:2). When Christ returns, God’s love, patience, holiness, mercy and grace towards sinners will be evident for all to see.

We have seen that God plans, creates, sustains and governs. The planning is now past. And God has created in the past, but Christians are part of a new creation (2 Cor. 5:17) and God promises a millennial kingdom (Rev. 20:1-6) and a new heaven and a new earth in the future (Rev. 21:1 – 22:5). On the other hand, God is actively sustaining and governing at present and into the future. What are the lessons for us in all these things that God does?

Because God has a good plan for creation, history and salvation; life has purpose and we are moving towards the time when God’s glory will be revealed.

Creation has value because God made it and sustains it. But, do we believe that God will meet all our needs? We can be confident that God will sustain us. Peter said, “Cast all your anxiety on Him because He cares for you” (1 Pt. 5:7).

People have value because they are made in the image of God, because Jesus came as one of us, and because believers will be like Him in heaven.

What about when we are struggling in our circumstances? Let’s remember, God is sovereign. He rules. He knows what’s happening. He cares. Like Jesus said in the Garden of Gethsemane we can say, “Not my will, but yours (God’s) be done” (Lk. 22:42). God answers our prayers in accordance with His will (His plan). We can be assured that our life is in God’s hands, and that His plan for our lasting good, and for His glory, is being followed. He is always in control. God is with us in our struggles. He loves us so much that He gave His life for us. So, we can continue to trust God whatever our circumstances.

God is constantly working out His purpose in our lives, in the life of the church and in the world at large; sometimes visibly and sometimes unseen. So, although God rested on the day after creation, He is certainly busy today!

In the past God has planned and created, but now He sustains and governs His creation. And it’s good to know that we are part of God’s plan. So Brooks and Dunn were right and wrong – God is busy, but He’s not too busy to help us today!