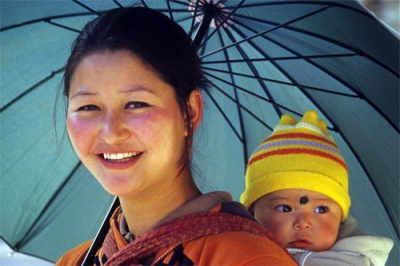 On Mother’s Day we honor our mothers. It’s been said that the most powerful force in a child’s life is their mother’s influence. Let’s look at what the Bible says about this topic.

In Biblical times, infants and young children spent most of the time under their mother’s care (Gen. 32:11). Samuel remained with Hannah until he was weaned, when he would be at least three years of age (1 Sam. 1:22-24). Nursing mothers gently care for their children (1 Th. 2:7). The Bible says that after weaning, a child is content to be “with its mother” because it has learnt to trust its mother (Ps. 131:2NIV).

Solomon advised parents, “Start children off on the way they should go, and even when they are old they will not turn from it” (Prov. 22:6). The first word can also be translated as “train” and “teach”. It is probably associated with discipline, as the Hebrew word translated “children” is also mentioned in Proverbs 22: 15 and 23:13.

This is a proverb that is generally true, but not a promise or guarantee. It is the best course to a desired outcome. Children are more likely to be godly if they are trained in such a way. But other factors can come in like the influence of others.

Another proverb says, “The wise woman builds her house, but with her own hands the foolish one tears hers down” (Prov. 14:1). It contrasts two types of woman. The first is focused on her family, whereas the second tears down her family. The first is godly, while the second is ungodly.

When Paul gives instructions to Christian households he addresses wives, husbands, children and fathers, but not mothers (Eph. 5:22 – 6:4; Col. 3:18-21). The fathers are told “do not exasperate your children; instead, bring them up in the training and instruction of the Lord” and “do not embitter your children, or they will become discouraged” (Eph. 6:4; Col. 3:21). Obviously the mothers didn’t require any command about bringing up their children. Maybe because they went through a 9-month pregnancy and breastfed their children, they developed a strong bond with their children.

However, Paul says that older women should urge younger ones to love their children (Tit. 2:3-4). He also says that one of the good deeds of a wife was bringing up children (1 Tim. 5:9-10).

Paul told a godly woman, “It has given me great joy to find some of your children walking in the truth” (2 Jn. 1:4). Note the word he used was “some”, not “all”. This shows godly faith in two generations. For example, Hannah was a godly mother whose child Samuel grew up to be godly (1 Sam. 1:24-28). Also, three proverbs that King Lemuel was taught by his mother are recorded in the Bible (Prov. 31:1-9). As a prayer meeting was held in her home, presumably both John Mark and his mother were godly (Acts 12:12).

Paul wrote to Timothy, “I am reminded of your sincere faith, which first lived in your grandmother Lois and in your mother Eunice and, I am persuaded, now lives in you also” (2 Ti. 1:5). This shows godly faith in three generations. A godly grandmother was followed by a godly mother who was followed by a godly son. He also wrote, “from infancy you have known the Holy Scriptures” (2 Tim. 3:15). This implies that these women probably taught the Scriptures to Timothy when he was an infant.

So godly mothers can have a positive influence on their children.

But sometimes a mother’s influence is not the best. One of the reasons for the spread of wickedness before the flood in Noah’s day seems to be the strong influence that mothers have on their children (Gen 6:1-5). The Israelites were commanded not to intermarry with the Canaanites because they will turn their children to follow idols (Dt. 7:3-4). King Ahaziah and King Joram were ungodly like their parents (1 Ki. 22:52, 2 Ki. 3:2). However, as in the previous category, a child can differ from their parents. For example, King Asa was godly unlike his grandmother (2 Chron. 15:16).

So, ungodly mothers can have a negative influence on their children.

This shows that mothers can have a significant influence on their children.

If you are a mother, do you have a positive or a negative impact on your children? Do you discipline them fairly? Are you building them up or tearing them down? Are you “walking in the truth”? Do you have a sincere Christian faith?

If you are a father, do you support your wife?

Do you honor and respect your mother?