What’s the source for our confidence?

How do you cope with your fears and anxieties? Some take time out, or use breathing techniques, or face their fears, or imagine the worst, or look at the evidence, or don’t try to be perfect, or visualize a happy place, or talk about it, or have a meal, a walk and a good night’s sleep, or reward themselves. David, the shepherd who became king of Israel, experienced many dangerous situations. What can we learn from the poem that David wrote when he was facing slander (Ps. 27ESV)?

1 The Lord is my light and my salvation;
whom shall I fear?
The Lord is the stronghold of my life;
of whom shall I be afraid? END_OF_DOCUMENT_TOKEN_TO_BE_REPLACED

May we go in there? 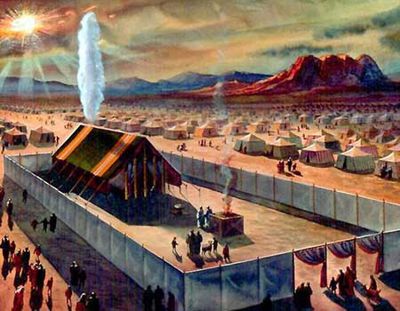 Imagine an ancient Moabite gazing down upon the Tabernacle of Israel from a hillside. This Moabite is attracted by what he sees so he and his wife descend the hill and make their way toward the Tabernacle. They walk around this high wall of dazzling linen until they come to a gate and at the gate, they see a man.

“May we go in there?” they ask, pointing through the gate to where the bustle of activity in the Tabernacle’s outer court can be seen. “Who are You?” demands the man suspiciously. Any Israelite would know they could go in there. “We’re from Moab”, they reply. “Well, I’m very sorry, but you can’t go in there. You see, it’s not for you. The Law of Moses has barred all Moabites from any part in the worship of Israel” (Dt. 23:3).

The Moabites looked so sad and said, “Well, what would we have to do to go in there?” “You would have to be born again,” the gatekeeper replies. “You would have to be born an Israelite”. “Oh, we wish we had been born Israelites”, they say and as they look again, they see one of the priests, having offered a sacrifice at the bronze altar and cleansed himself at the bronze basin and then they see the priest enter the Tabernacle’s interior. “What’s in there?” they ask. “Inside the main building, we mean”. “Oh,” the gatekeeper says, “That’s the Tabernacle itself. Inside it contains a lampstand, a table, and an altar of gold. The man you saw was a priest. He will trim the lamp, eat of the bread upon the table and burn incense to the living God upon the golden altar”.

The man from Moab sighs again, “I wish that I had been born of Israel of the tribe of Levi of the family of Aaron”, and then, as he gazes wistfully at the closed Tabernacle door, he says, “What else is in there?” “Oh, there’s a veil. It’s a beautiful veil I’m told and it divides the Tabernacle in two. Beyond the veil is what we call ‘the Most Holy Place’”. “What’s in the Most Holy Place?” the Moabite asks. “Well, there’s the sacred chest in there and it’s called the Ark of the Covenant. It contains holy memorials of our past. Its top is gold and we call that the mercy seat because God sits there between the golden cherubim. Do you see that pillar of cloud hovering over the Tabernacle? That’s God’s visible presence. It rests on the mercy seat”, said the gatekeeper.

Again, a look of longing comes over the face of the Moabite man. “Oh,” he said, “if only I were a priest! How I would love to go into the Holy of Holies and gaze upon the glory of God and worship Him there in the beauty of His holiness!’. “Oh no!” said the man at the gate. “You couldn’t do that even if you were a priest! Only the high priest can enter the Most Holy Place. Only he can go in there. Nobody else!”

The heart of the man from Moab yearns once more. “Oh,” he cried, “If only I had been born an Israelite, of the tribe of Levi, of the family of Aaron. If only I had been born a high priest! I would go in there every day! I would go in there three times a day! I would worship continually in the Most Holy Place!”. The gatekeeper looked at the man from Moab again and once more shook his head. “Oh no,” he said, “you couldn’t do that! Even the high priest of Israel can go in there only once a year, and then only after the most elaborate preparations and even then only for a little while”.

Sadly, the Moabite turned away. He had no hope in all the world of ever entering there!

That’s the old way. But it’s not the end! There’s more!

As Gentiles, the Moabites were, “excluded from citizenship in Israel and foreigners to the covenants of the promise, without hope and without God in the world” (Eph. 2:12NIV). But Jesus changed this situation. “But now in Christ Jesus you who once were far off (like the Gentile Moabites) have been brought near (like theJewish High Priest) by the blood (death) of Christ” (Eph. 2:13). The old way to God, which was exclusive to the Jews, has been replaced by the new way, which is open to everyone. Here’s how it happened.

When Christ died “the curtain of the temple was torn in two from top to bottom” by an earthquake (Mt. 27:51, 54; Mk. 15:38; Lk. 23:45). This signified that all people could now have access to God through Christ’s vicarious (substitutionary) death. And they don’t have to come via human priests.
“Therefore, brothers and sisters, since we have confidence to enter the Most Holy Place (like the High Priest) by the blood (death) of Jesus, by a new and living way opened for us through the curtain, that is, His body, and since we have a great priest (Jesus Christ) over the house of God (all true believers, Heb. 3:6), let us draw near to God (in prayer, praise and worship) with a sincere heart and with the full assurance that faith brings” (Hebrews 10:19-22). The curtain represented the body of Christ and its tearing represented His death. By this act, God indicated that all believers have access to God. They could be close to Him like the High Priest, not distant like the Moabites and the gatekeeper. This new way of approaching God is open to all who trust in Christ’s sacrificial death when they come in sincerity, assurance, salvation, and sanctification (Heb. 10:22).

So today, “there is neither Jew nor Gentile, neither slave nor free, nor is there male and female, for you are all one in Christ Jesus” (Gal. 3:28). All true Christians have the same spiritual status. “Here there is no Gentile or Jew, circumcised or uncircumcised, barbarian, Scythian, slave or free, but Christ is all, and is in all” (Col. 3:11). As far as their standing before God is concerned, all believers are on the same level. No believer is spiritually superior to anyone else.

Reference
This blogpost is based on an illustration in “Exploring Hebrews” (p.94-96) by John Phillips (2002), which was brought to my attention by Jared Wilson.

Also see: What does Galatians 3:28 mean? 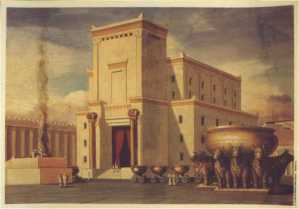 According to the dictionary, the word “church” is used to describe either a building used for public Christian worship, a church service, or a group of Christian believers. In practice, the meaning is given by the context in which the word is used. In this article we look into what the Bible says about buildings used for Christian worship.

Before the church came into existence in Acts 2, the Jews were God’s people on earth. Their main place of worship was the tabernacle or temple, which was also called the “house of the Lord” and the “house of God” (Ex. 23:19; Ps. 42:4; 122:1). This was a special building which was used for festivals, sacrifices, prayers and psalms. God gave detailed specifications for the building and its furniture. God was said to live in the inner room of this building that was only entered by the High Priest once a year. However, Solomon knew that God wasn’t confined to the building (1 Ki. 8:27; Acts 7:47-50). Some thought they were safe in Jerusalem because God would always protect the temple, but Jeremiah criticised this superstitious faith in a building rather than in God (Jer. 7:4-14).

From about the third century BC, synagogues were also used by the Jews for worship and teaching their law. As this was the inter-testament period, they are not mentioned in the Old Testament. By the time Jesus was born, most Jewish communities had a synagogue. Jesus and Paul both taught in synagogues (Jn. 18:20; Acts 17:2).

For a brief period the early church met together in the outer court of the temple (a large open area), until persecution drove them out of Jerusalem (Acts 2:46; 5:12). Otherwise, the early church met in people’s homes. They were house churches. For example, there was a church in Priscilla and Aquila’s house in Rome and in Ephesus (Rom. 16:3-5; 1 Cor. 16:19) and in Philemon and Apphia’s house and in Nympha’s house in Colossae (Col. 4:15, 17; Phile. 2). It seems as though they may have also used public buildings such as the lecture hall of Tyrannus (Acts 19:8-10).

For the following reasons, church buildings are not mentioned in the New Testament and there are no specifications given for places of Christian worship:

How the Christian church is like the Jewish temple

In the New Testament we learn that the people of the church are like a building. Paul told Gentile believers: “Consequently, you are no longer foreigners and strangers, but fellow citizens with God’s people and also members of His household, built on the foundation of the apostles and prophets, with Christ Jesus Himself as the chief cornerstone. In Him the whole building is joined together and rises to become a holy temple in the Lord. And in Him you too are being built together to become a dwelling in which God lives by His Spirit” (Eph. 2:19-22NIV).

In particular, the people of the Christian church are like the Jewish temple:

So the Jewish temple (which was the physical house of God) has been replaced by the people of the church (which is the spiritual house of God). In a metaphorical sense, any group of Christians are the house of God.