How to choose the best Bible 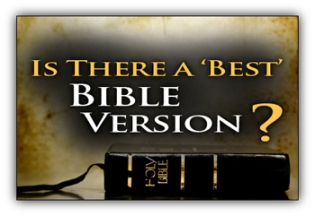 Have you read the best book in the world? The Christian Bible is the world’s best-selling and most translated book. There are many English versions of the Bible. How can we choose which one is best for us? We will look at six categories.

The most accurate Bible is written in the original languages, which were Hebrew and Aramaic for the Old Testament and Greek for the New Testament. This is the best way to appreciate what the Bible meant to its original readers.

Because few of us know these languages there are Interlinear Bibles that show both the words in the original language and the equivalent English words. These can be useful for the purposes of Bible study. When you look at an Interlinear Bible you will realise that it is impossible to do a word-for-word translation from the original languages into spoken English. For example here is a verse in such a Bible: “so For loved God the world, so as the Son of Him, the Only-begotten, He gave, that everyone believing into Him not may perish, but have life everlasting” (Jn. 3:16). The words are in a different order to the way we speak and sometimes single words need to be expressed as phrases and sometimes phrases need to be expressed as single words. Also additional words need to be added to make it readable. So there is no one-to-one correspondence between the words of different languages, and there is no such thing as a word-for-word literal translation of the Bible into spoken English. Furthermore, interlinear copies of the Old Testament are extremely difficult to read as Hebrew was written from right to left!

But, what if you can’t read ancient Hebrew and Greek or want a Bible that is readable? You could read the Bible that has the most comprehensive footnotes that relate to the original languages.

The New English Translation (NET) Bible (2005), which is mainly available in electronic form, has extensive footnotes comprised of Translation Notes, Text-critic Notes, Study Notes, and Map Notes. This enables a functional equivalent (readily readable and understandable) text with formal equivalent information about the source text in the footnotes. The translators’ notes show the decisions and choices behind the translation and makes the original languages more accessible.

But, what if you don’t want to read a Bible with extensive footnotes and that is not readily available in hardcopy form? You could read the Bible that has been read over the longest period of time.

The King James Version (KJV) has a 400 year heritage. It is a product of a bygone era that added many sayings to the English language. Of course the type style and spelling has been modernised, otherwise it would be too difficult for most of us to read comfortably. The most recent edition seems to be 1987. If you appreciate the work of Shakespeare and classic literature then this is the Bible for you. For example, it uses pronouns such as “thou”, “thee”, “ye”, “thy”, and “thine” and verbs such as “speaketh”.

The source language for this translation, the “Received Text” (“Textus Receptus” in Latin) was based on some Byzantine (eastern portion of the Roman Empire) manuscripts (dated from 1000 AD). As the Received Text was first published in 1516, it lacks the input of many early Biblical manuscripts which have been discovered since this time. Also, it lacks the input of much of linguistic scholarship of the past few hundred years.

In order to make the KJV more readable for modern readers, its vocabulary and grammar was revised in the New King James Version (NKJV, 1982). So if you prefer a traditional Bible that is based on the KJV, then the NKJV is the Bible for you.

Languages are always changing and English is no exception. Traditionally male terms were often used to refer to groups that included both men and women. This was particularly the case for patriarchal societies. But this pattern has been changing. For example, people now say “people” or “humanity” instead of “man” and “mankind”. All translations make these changes from the source text to some degree. Those that do it to a small extent, I will refer to as “traditional”, whereas those that do it to a large extent, I will refer to as “gender accurate”. Here is a comparison between different translations.

The following translations generally use male terms for groups of people: New American Standard Bible (NASB, 1995), English Standard Version (ESV, 2007) and Holman Christian Standard Bible (2009) (see Appendix). So if you prefer a traditional Bible that is based on current scholarship, then these are the Bibles for you.

The following translations generally use idioms in the receptor language: Contemporary English Version (CEV, 1995) and New Living Translation (NLT, 2007). So if you prefer a Bible that is closer to spoken English, then these are the Bibles for you.

But, what if you want to read a Bible that is readable but structured closer to the text structure in the source language? You could read a Bible which combines contemporary language with accuracy in translation.

The New International Version (NIV, 2011) aims to be “gender accurate” by using the words spoken today to describe groups of people. Here is a link to my review of the NIV Bible. So if you prefer a Bible that is closer to spoken English, then this is the Bible for you.

But, what if you want to read the best Bible?

Although no translation is perfect, the best Bible is the one you read! They all tell us what God wants us to know and to do.  They are God’s message to us all, and God continues to speak through them today. Let’s translate this message into our lives.

These English translations of the Bible have been produced by evangelical Christians who consider the Bible to be the inspired Word of God.

This entry was posted on January 28, 2013 by George Hawke. It was filed under Christian, New Testament, Old Testament, Spiritual and was tagged with accurate, best, bible, comprehensive, contemporary, historic, readable, review, traditional.