Bethlehem, God’s solution to our crises 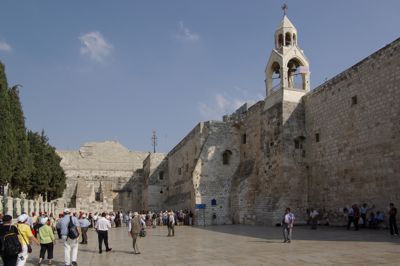 What do you associate with each place: Gettysburg, New York, Las Vegas, Hiroshima, Hollywood, London, Salt Lake City, Paris, Yosemite, and Bethlehem? For most of us each place name arouses particular connotations, connections and feelings.

You may say that Bethlehem was the birth place of Jesus Christ. But what did the word “Bethlehem” mean to those who lived before Christ was born?

Let’s look at what the Old Testament says about Bethlehem, a town which is about 10 km south of Jerusalem. Both of these towns are on a north-south range of hard limestone hills rising midway between the Mediterranean coast and the Jordan rift valley. Bethlehem is 775 metres above sea level, 30 metres higher than Jerusalem. It was previously known as Ephrath(ah), a name that refers to that area of Judea (Gen. 35:19; 48:7, Ruth 1:2; 4:11; Mic. 5:2).

In about 1300 BC, Elimelek and his wife Naomi lived in Bethlehem (Ruth 1:1). Because of a famine in Israel, Elimelek’s family migrated to Moab, which was south-east of the Dead Sea. In Moab, Naomi’s husband and two sons died. She was left alone and destitute. It was a family crisis. It looked like the end of the family line. So she decided to return to Bethlehem, her husband’s home town. Her daughter-in-law Ruth, went with her. Now we have two destitute women, one of them a foreigner.

God provided a solution to this crisis when Boaz let Ruth glean in the barley fields, by gathering stalks of grain left behind by the harvesters. So they had food to eat. But they were helped even more when Boaz married Ruth. This preserved the family name and the family property through Boaz, the kinsman-redeemer. Also, both women were sustained in the long term. Naomi was cared for in her old age and she had a grandson called Obed whose grandson was David.

So at Bethlehem God provided a solution to a family crisis.

This family lived in Bethlehem for the next few hundred years. Because the Israelites hadn’t driven out all the inhabitants of Canaan, they faced constant opposition from the Philistines who lived on the coastal plain. During the reign of the first king, Saul, a national crisis arose. The Philistine army penetrated into Israelite territory and was gathered in the valley of Elah. And they had a giant called Goliath who terrorised the Israelites. Because the valley of Elah extends from the coastal plain eastwards towards Bethlehem, this threatened Bethlehem and after that Jerusalem (1 Sam. 17).

God provided a solution when David killed Goliath with a stone. David lived in Bethlehem where he was a shepherd. He was sent to the valley of Elah by his father to take provisions for his brothers in the Israelite army. When their hero was killed, the Philistines turned and ran back to Gath. David saved his nation from the enemy and became a national hero. So from Bethlehem, God provided a solution to a national crisis.

Another national crisis arose soon afterwards when Saul changed from being a godly king to an evil tyrant. God provided another solution when he sent Samuel to Bethlehem to anoint David privately to be the next king (1 Sam. 16:1-13). So at Bethlehem, God once again provided a solution to a national crisis. Later David was publicly anointed as king of the tribe of Judah and king of the whole nation (2 Sam. 2:1-4; 5:1-5). David established the kingdom of Israel. So he was the most famous person to live in Bethlehem.

But although Jesus was the long-awaited Jewish Messiah, His mission was to the whole world.

God provided a solution when Jesus was born in Bethlehem and He later died in Jerusalem for the sin of mankind and then rose again to give new life to all who put their faith and trust in Him. Jesus is the source of peace with God (Lk. 2:14). When Jesus was born at Bethlehem, it was the beginning of His mission on earth to demonstrate God’s love and give up His life to free us from the penalty and power of sin. He came for everyone. His coming was welcomed by lowly shepherds and the wealthy Magi. The shepherds were Jews and the Magi were Gentiles.

So from Bethlehem, God provided a solution to a global crisis.

What about us? You may think, I’m not destitute like Naomi and Ruth, or threatened like the nation of Israel. I’m not a terrorist! But what about ignoring the God who created our universe to whom we owe so much ?

This Christmas, let’s recognize our personal crisis and accept God’s solution that was revealed at Bethlehem over 2,000 years ago. Let’s celebrate by praising Him like the shepherds (Lk. 2:20), and worshiping Jesus like the Magi (Mt. 2:11).

Also see other articles on places in the Bible:
Gehenna – Where’s hell?
Where’s Zion?
Babylon, center of humanism and materialism
Lessons from Egypt
Lessons from Sodom
Massacres and miracles in Jericho
Rebellion and deception at Samaria
Nineveh experienced God’s mercy and justice
Worshipping God and idols at Bethel

This entry was posted on December 25, 2015 by George Hawke. It was filed under Christian, Christmas, Spiritual and was tagged with Bethlehem, crisis, David, Jesus, solution, terrorism, terrorist.