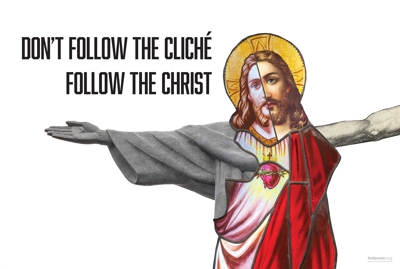 Like most people living in the post Christian 21st Century Joe had heard of Jesus. But he didn’t know much about him. So, deciding to educate himself, he Googled some answers. Here’s what Joe said afterwards.

“He’s probably Scandinavian… from Norway or Denmark. You can tell by his pale skin, long blonde hair and blue eyes. But he’s definitely not a Viking. He’s more like a guru. In all the movies and old paintings he looks really chilled. In fact, ‘Chilled Nordic Jesus’ seems to be the most popular kind of Jesus.

“But there were others. I also found, ‘Religious Jesus’ or ‘Church Jesus’. He’s in paintings and stained glass windows everywhere. And he loves medieval Gothic churches. He’s closely related to, ‘Out of this world Jesus’ or ‘Ethereal Jesus’ who you can also find in churches – usually looking right past you. It’s hard to tell if he’s super focused or stoned or just not very interested.

“When I read articles I came across different reasons for why Jesus came. So, ‘Great moral teacher Jesus’ joins a succession of teachers down through the ages who taught us how to live better lives. On the other hand, ‘Killjoy Jesus’ is always watching and ready to condemn us when we stuff up. But ‘Genie Jesus’ is really great. He’s available for party tricks and special rescues – unfortunately only prayers from the super spiritual seem to work.

“The last Jesus I found was ‘Political Jesus’ – he was a bit of a failure. He wanted to cut a better deal for poor people with the Roman and Jewish leaders. But he didn’t succeed. Instead he was killed. There really does seem to be a lot of confusion about why Jesus died.

If only Joe had listened to what Jesus said about himself instead of the opinions of others. If he’d only looked in the Bible instead of online he could have skipped the clichés and found the real, authentic Jesus of history… born in Palestine… who probably had brown skin… who lived well before stained glass and gothic church architecture and who challenged religious hierarchies. Joe could have heard Jesus say that he “came to seek and to save the lost” and that his plan was to give his life, “as a ransom for many”. And he could have read these immortal words…

“I am the light of the world. If you follow me, you won’t have to walk in darkness, because you will have the light that leads to life” (John 8:12).

Bible Verse: John 8:12 “I am the light of the world. If you follow me, you won’t have to walk in darkness, because you will have the light that leads to life”.

Prayer: Dear God, please help me to follow Jesus in 2018 and to understand more about Him as I read about Him in the Bible. Amen.

This entry was posted on January 1, 2018 by George Hawke. It was filed under Christian, New year, Spiritual and was tagged with Christ, cliche, follow, following, Jesus, Outreach Media, social media.