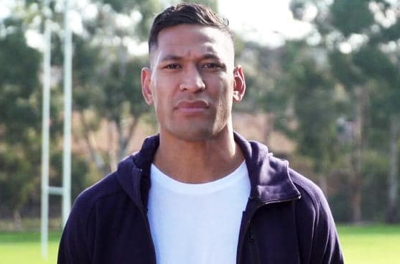 Israel Folau’s appeal for financial assistance for his legal fight against Rugby Australia has been shut down by GoFundMe Australia.

On 18 June 2019 a crowdfunding campaign was launched to fund Folau’s legal fight against Rugby Australia. Folau said, “I decided to take legal action when Rugby Australia terminated my employment contract and ended my playing career after I expressed my religious beliefs on social media. Sadly, Rugby Australia have said that they will devote significant resources to fight me in court. This shows I have a long and hard battle on my hands, which is why I am asking for your support.” (Also see, Appendix).

Today (24 June 2019) the crowdfunding campaign was shut down by GoFundMe after raising more than $750,000 in a few days. They said, “We are absolutely committed to the fight for equality for LGBTIQ+ people and fostering an environment of inclusivity”. The company also said it would not tolerate the promotion of discrimination or exclusion. Except (in this case) the promotion of discrimination or exclusion against Bible-believing Christians!

According to Bill Muehlenberg’s blog, this is “a full-fledged war on Christianity, and on any believers who boldly stand up for their faith.” There have been relentless media attacks designed to vilify and demonise Folau. There is hatred of Folau and God. And the media continue to attack both him and his wife with false information.

The legal significance of this case is very high. This case is our case if we are Christians, or people who have politically incorrect beliefs. It is unjust, and it threatens to set a precedent which could bring about the same injustice upon many employees, professionals, and others in the Australian community. Folau did no wrong, but he is being punished as a wrongdoer.

It is ultimately about religious freedom – and the war against it. It’s a crackdown on Christianity. To what extent is religious expression protected in Australia?

NSW One Nation MP Mark Latham, who defended Folau in his maiden speech to parliament earlier this year, said GoFundMe’s decision was “excessive use of corporate power”. He tweeted: “Lefties scoffed when I said the absence of religious freedom protections would lead to a reign of terror against Christians. In all aspects of the Folau matter, it’s easy to see what’s happening.”

After GoFundMe shut down the crowdfunding site, the Australian Christian Lobby offered to host Folau’s online appeal for funds to pay for his legal case. Over $1 million was raised on the first day! The target is $3 million.

If you can’t express your religious beliefs without losing your job, then you don’t have freedom of religion.

“Thank you to all those who have given to my Legal Action Fund so far. I am humbled and overwhelmed by the support I have received, for which I am very grateful. Unsurprisingly, I have been criticised by Rugby Australia and some sections of the media overnight.

I decided to take legal action when Rugby Australia terminated my employment contract and ended my playing career after I expressed my religious beliefs on social media. I have received thousands of messages from supporters who believe discrimination in the workplace is wrong and has no place in Australia or anywhere else.

Sadly, Rugby Australia have said that they will devote significant resources to fight me in court. This shows I have a long and hard battle on my hands, which is why I am asking for your support. The money that is donated will be used to fund my legal battle, which could take years. While the attacks against me have shown I have a big fight on my hands, I will stand strong.

Your support and my faith will give me strength. For those of you who have chosen to donate within your capacity, I am very grateful of your support for my legal case. For those not in the position to donate, I value your prayers and messages of support so much. Every little bit will help.” Israel Folau.

This entry was posted on June 24, 2019 by George Hawke. It was filed under Christian, Culture, Spiritual and was tagged with crowdfunding, Folau, GoFundMe, Israel Folau, religious freedom.