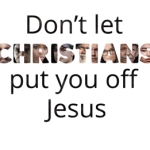 Suppose there’s a man in a town with a history of shady business practices and fraudulent dealings. He also happens to be a regular church-goer.

Many people where he lives know the man to be shonky and would say they’ve been ‘ripped off’ as would people in other towns. What’s terrible is that some people where the man lives say, ‘If that man is a Christian, then I don’t want any part of Christianity’. And, at one level, their reaction is understandable.

The story raises questions about what it means to be a genuine Christian and what churches and other Christians should do when people say they are Christian but their actions clearly aren’t. You can imagine that the answers aren’t always easy. END_OF_DOCUMENT_TOKEN_TO_BE_REPLACED

There’s a widespread government crackdown on religion in China (including Christians and Muslims). Church leaders have been arrested on subversion charges and taken away. But this isn’t new or surprising because there’s a pattern of persecution of God’s people across the past 3,500 years of history.

The Hebrews were God’s special people in Old Testament times. God gave their ancestor Abraham some great promises. But before these were fulfilled, his descendants were persecuted in Egypt. Slave masters oppressed them with forced labor (Ex. 1:11-14). The Egyptians worked them ruthlessly with harsh labor. And Pharaoh commanded that all Hebrew male babies be put to death; they were to be drowned in the Nile River (Ex. 1:15-22).

But God saw their misery, heard them crying out and groaning because of their slave drivers, and was concerned about their suffering. (Ex. 3:7; 6:5). The oppression increased when they were commanded to gather the straw for brick making (Ex. 5:6-21). This continued until God used Moses to rescue them from slavery in Egypt so they could travel back to Canaan. END_OF_DOCUMENT_TOKEN_TO_BE_REPLACED

Why do Christians celebrate Christmas, when everybody knows it is pagan in origin, tradition and most of its practices?

Christmas is a time when Christians remember the birth of Jesus Christ. Most historians agree that the celebration of Christmas did not begin until the fourth century, although they are not certain exactly how or why it began as a Christian festival. The most accepted explanation is that it began in Roman culture that held a pagan celebration for the winter solstice on December 25. As Christians were reluctant to take part, they replaced it with Christmas.

Local customs, culture, traditions and history influence Christmas practices around the world. Some, such as giving gifts or using a star, were derived from the biblical nativity stories. Some, such as the legend of Saint Nicholas, have their origin in Church history. Others, such as the use of evergreens and a yule log, have pagan origins. Still others, such as reindeer, elves, and the North Pole, are secular in origin and used as commercial marketing techniques.

The word “pagan” means one who worships a false god – an idolater, an unbeliever. Many things have a pagan origin. For example, the names of the days of the week in English were named after Anglo-Saxon gods and goddesses (except for Saturday, which was named after the Roman god Saturn). These in turn were based on Roman gods. However, the meaning of these names has changed from that of a deity to that of a particular day. Previously they had a pagan connection, but now they do not. So, it’s not the source long ago that’s important, but whether there is a connection today to idolatry (1 Cor. 10:20). The same applies to tradition: it’s the situation today that counts.

Many customs cannot be linked directly to Scripture. For example, families remember birthdays and weddings, but in the Bible the former are only mentioned with respect to Pharaoh and Herod (Gen. 40:20; Mt. 14:6). This custom is not wrong. We have freedom in many areas of life. New Testament passages that apply to the Church are much less prescriptive than those applied to the Jews in the Old Testament. Customs can be morally good (Lk. 4:16), evil or neutral. Two tests that can be applied to customs and practices are: Will God be glorified, and will anyone be stumbled (1 Cor. 10:31-32)?

There is no mention in Scripture of celebrating Christ’s birth, although believers are to remember His death. On the other hand, there is no prohibition against it. The incarnation is part of the gospel message: Christ was born and lived as a human before He was crucified. The celebration of Christmas could be considered a debatable matter (Rom. 14:1). Christians shouldn’t quarrel over debatable matters, but follow their conscience and honor God in whatever they do (Rom. 14:1-15:7; 1 Cor. 8:4-13; 10:14-33). They shouldn’t impose their convictions on others but respect each other’s conscience on these matters.

In a secular society, Christmas provides a great opportunity for evangelism. The birth of Christ is the theme of many Christmas carols. Believers can use this time to explain that Christ came into the world to address the problem of our separation from God and enable us to be reconciled with God and to have the promise of eternal life with Him in heaven.

The main dangers at Christmas are the idols of selfishness, materialism and the gospel of good works. Are we focused on what we receive or on what we give? Do we get caught up in the frenzy of shopping and celebrating? Do we tell children that if they are good enough they will receive presents from Santa Claus?

Beware of the false gods of Christmas. Remember that, “It is more blessed to give than to receive” (Acts 20:35), and that the gospel teaches that we are not saved by what we do, but by God’s grace (Eph. 2:8).

Also see: 3 explanations of the origin of the date of Christmas