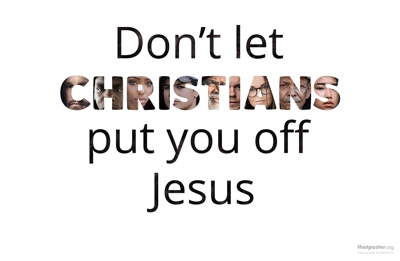 Suppose there’s a man in a town with a history of shady business practices and fraudulent dealings. He also happens to be a regular church-goer.

Many people where he lives know the man to be shonky and would say they’ve been ‘ripped off’ as would people in other towns. What’s terrible is that some people where the man lives say, ‘If that man is a Christian, then I don’t want any part of Christianity’. And, at one level, their reaction is understandable.

The story raises questions about what it means to be a genuine Christian and what churches and other Christians should do when people say they are Christian but their actions clearly aren’t. You can imagine that the answers aren’t always easy.

Certainly the Bible says that those people whose lives are grossly hypocritical and who refuse to change ought to be excluded from church. But what if they keep calling themselves Christian in the community? Or they just move to another church and start again?

Or what if a church or a whole movement of people begin to do things in the name of Jesus that are just plainly at odds with the Bible? History is full of appalling things done in the name of Jesus. Some are well known: the Spanish Inquisition, the Crusades, people burning each other at stakes. Thankfully, it’s simply not possible to justify these kinds of things from the Bible.

So where does the problem lie? Not with God. The very reason Jesus came to earth was because we’ve got a major issue. It’s called sin. And sin is in every person. We all think, say and do things that we should rightly be ashamed of.

Jesus said this about His coming into the world: God’s light [Jesus] came into the world, but people loved the darkness more than the light, for their actions were evil (John 3:19).

What we mustn’t do is use the bad example of some ‘Christians’ as an excuse for not worshipping Jesus and coming into the light ourselves. That’s because the only people who can join the Christian movement are sinners willing to repent. So any person in church will always be a moral failure. Including you!

So yes, Christians should be people who try to live changed lives full of joy and good deeds. All of them will struggle in doing this. And yes, occasionally you’ll find some that seem to be really just pretending. But don’t let Christians put you off Jesus.

Bible verse: John 3:19 “God’s light [Jesus] came into the world, but people loved the darkness more than the light, for their actions were evil.”

Prayer: Dear God, please help me to leave behind evil works and worship you in the light.

This entry was posted on May 3, 2019 by George Hawke. It was filed under Christian, Gospel, Spiritual and was tagged with bible, Christians, darkness, Jesus, light, Outreach Media.