What are the new heaven and new earth like?

In the Bible, the words translated as “heaven” or “heavens” can mean either:

The term the “heaven and earth” is mentioned in 26 verses of the NIV Bible. Most of these are describing what God created in the beginning of time (Gen. 14:19; Ps. 115:15, Isa. 37:16). It refers to the universe. The physical world of the earth, its atmosphere and the realm of the stars.

The term the “heavens and earth” is mentioned in 15 verses of the NIV Bible. Likewise most of these are describing what God created in the beginning of time (Gen. 1:1; Jer. 32:17; Acts 14:15). It refers to the universe. The physical world of the earth, its atmosphere and the realm of the stars.

The term “new heavens and new earth” is mentioned in two verses (Isa. 65:17; 66:22). Isaiah lived until at least 680 BC, which is about 75 years before the Babylonian siege of Jerusalem when Daniel was captured and deported to Babylon (in 605 BC) and about 94 years before the Babylonians destroyed Jerusalem (in 586 BC) and took more captives. The book of Isaiah is about God’s judgment and deliverance of the Jews. Isaiah predicted that the judgment was imminent (Ch. 1-39), but they would be eventually restored (Ch. 40-66). It ends with restored people living on a restored earth under the rule of the Messiah.

In this portion of the book, Isaiah is looking ahead to when the Jews would be in exile in Babylon.  Isaiah 63:15 – 64:12 is a prayer of those in exile seeking deliverance from their captivity. The prayer is answered in Chapters 65-66, which mentions the new heavens and the new earth.
“See, I will create new heavens and a new earth. The former things will not be remembered, nor will they come to mind” (Isa. 65:17NIV).
“‘As the new heavens and the new earth that I make will endure before me,’ declares the Lord, ‘so will your name and descendants endure’” (Isa. 66:22).

So the Jews are promised a time of great blessing which has not yet occurred. When he spoke to Jews who rejected Christ, Peter called this the “times of refreshing” when God will “restore everything”, which was predicted by the Old Testament prophets (Acts 3:17-24). As it is referred to as a 1,000 year period in Revelation 20:1-7, this is often referred to as the Millennium.

Heaven and the Millennium 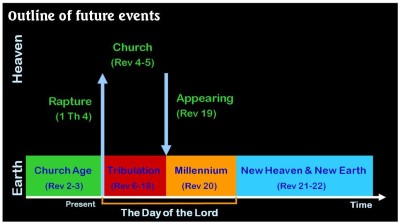 But those who trusted God before the death of Christ also go to heaven (God’s dwelling place). Although most of the promises they were given were physical (like the Millennium), they also had a heavenly hope. They realised that this earth was not their final home: “admitting that they were foreigners and strangers on earth” and “they were longing for a better country—a heavenly one” (Heb. 11:16a). Therefore, the verses in Isaiah probably include the eternal state of heaven. The main difference between the two is that there is sin in the Millennium, but not in heaven. Their temporal relationship is shown in the timeline. The Bible indicates that the sinful world vanishes after the Millennium and before the eternal state (Isa. 51:4-6; Rev. 20:11; 21:1).

A new heaven and a new earth

The term “a new heaven and a new earth” is also mentioned two verses (2 Pt. 3:13; Rev. 21:1). 2 Peter 3 comments on those who doubt God’s final judgment of the physical world. They are called scoffers (v.3). As the earth was devastated by a global flood in Noah’s time, in future the universe will be devastated by a fire (v.6-7, 10-12). At this time the sinful world is replaced by a sinless one (Mt. 24:35; 2 Pt. 3:10; Rev. 21:1). This judgement occurs before the “day of God”, which is the eternal state. It’s God’s final triumph over sin and evil. Christians are told to look forward to the “day of God” and “a new heaven and a new earth” – these terms are equivalent. They are told, “But in keeping with His promise we are looking forward to a new heaven and a new earth, where righteousness dwells” (2 Pt. 3:13). They look forward to God’s new creation where there will be no sin (Rom. 8:21). In this sense, it will be like God’s original creation. The physical universe will be transformed and renewed in a similar manner to the bodies of believers (Rom. 8:20-23). So it seems as though the eternal state has a physical component.

This new creation is characterised by:

It is also described in: “Heaven and hell: What is heaven like?”

We can see that those who trust God are promised a future time of blessing. It’s what they longed for (Heb. 11:16a; 2 Pt. 3:12-13). They look ahead and forward, not behind and backwards. Are we anticipating a time without sin and being in the presence of our Savior?

In view of this we should “make every effort to be found spotless, blameless and at peace with Him” (2 Pt. 3:14). It should change our behavior. Are we pure? Are we blameless? Are we holy? Are we at peace or is there strife?

I have heard there are seven heavens. How many are there, and which one is Jesus in? 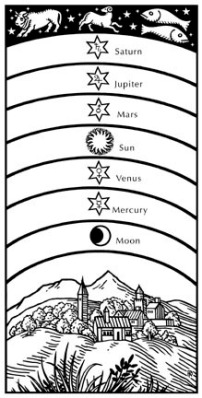 The idea of seven heavens is found in Islam, Judaism and Hinduism. In Islam and Judaism, the divine throne is said to be in or above the seventh heaven. In Hinduism, the god Brahma lives in the seventh heaven. However, none of these ideas are mentioned in the Bible.

It is thought that the myth of seven heavens came from ancient astrologists who could identify seven great heavenly objects (the Moon, Mercury, Venus, the Sun, Mars, Jupiter and Saturn) and assumed that each was moving in a separate heaven, in a series of layers above the earth. These were the only objects that people could see in the sky that moved with respect to the fixed stars. They gave us the names of the week: Sunday after the sun, Monday after the moon, and Tuesday to Friday after the Norse versions of Mars, Mercury, Jupiter and Venus, and Saturday after Saturn.

In the Old Testament, the Hebrew word “samayim” (Strongs #8064) is translated as “heaven” or “heavens” and has the following meanings according to the context in which the word is used:

In the New Testament, the Greek word “ouranos” (Strongs #3772) is translated as “heaven” or “heavens” and has the following meanings according to the context in which the word is used:

Christ’s incarnation and ascension is described as: “He who descended is the very one who ascended higher than all the heavens” (Eph. 4:10). This expression doesn’t represent multiple heavens, but the uniqueness of God’s home compared to the atmosphere and the stars.

Paul said that he was “caught up to the third heaven”, which was “paradise” (2 Cor. 12:2-4). If God’s dwelling place is the third heaven, then the other two heavens are the earth’s atmosphere and the universe beyond the earth.

So, the Bible refers to three different heavens, not seven heavens. These are three usages of the word “heaven”, not a series of layers above the earth. God dwells in the “highest heaven”, which is unique (Lk. 2:14). It is not necessarily physically uppermost or furthest from the earth, but it is superior and supreme. That is why Jesus is “exalted above the heavens”; He is greater than anything in the atmosphere and the rest of the universe (Heb. 7:26). Today, we mainly use the word “heaven” for God’s dwelling place.