Prayer is a major part of Islamic life. The call to prayer is broadcast five times daily from mosques. But how do they pray and what do they say? To minimize bias, the following content has been mainly drawn from Islamic websites.

Muslims are required to pray formally five times a day, as follows:

Since these times are based on the position of the sun in the sky, the prayer times change slightly from day to day. At each of these times there is a “Call to prayer” to remind people of the need to pray. The prayer should be offered before the next call to prayer.

Besides this formal prayer, Muslims can offer voluntary prayers before or after the obligatory prayers as well as at other times.

Historically, the mosque minaret was used as a tall platform from which to call Muslims to prayer and to announce the central tenant of the Islamic faith to non-believers. Today, however, the call to prayer is typically recited into a microphone and transmitted through loudspeakers installed on the minaret. This allows the call to prayer to be heard at great distances without climbing the minaret.

The call of the announcer is considered an art form, reflected in the melodious chanting of the call to prayer. However, some people don’t think it’s melodious! In Turkey, there is an annual competition to find the country’s best announcer.

Here’s a translation into English of the Arabic “Call to prayer”.

Muslims can pray together at a mosque or elsewhere alone. It’s compulsory for men to attend the Friday afternoon prayer in a congregation. Most prayers will take between 5-10 minutes. This can be influenced a lot by which chapters you choose to recite from the Quran. So formal prayer can take about 25-50 minutes per day. Here’s how Muslims pray formally to Allah.

In this ritual, the words are set in Arabic (no matter what the person’s native tongue) and there is a series of set movements that go with the words of the prayer. Each movement is always preceded by the phrase “God is Most Great”. All Muslims are to pray these prayers in Arabic, even if they don’t understand the language; the Arabic words have been translated into English below.

Muslims must be ritually clean before they pray and pray in a ritually clean location. They make sure of this by ritual washing of the parts of the body that are generally exposed to dirt and grime – mosques have washing facilities for this.

The prayer generally follows this sequence.

We have seen that a Muslim is to be involved in formal prayer for about 25-50 minutes each day. And these prayers are spread across five periods of the day. Each prayer has a set sequence of body movements and Arabic words. The “call to prayer” includes a summary of the Islamic faith – that Allah is the only God and that Mohammad is His prophet.

Muslims pray this formal prayer 35 times per week, 150 times per month and 1,825 times per year. As prayer is only one of the five main practices of Islam, this shows that it takes dedication to be a practicing Muslim. 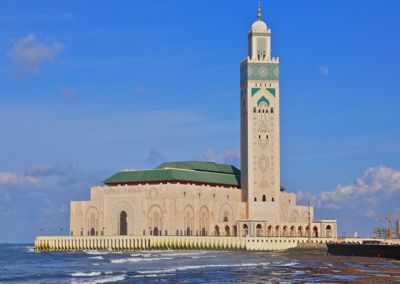 When you are woken before sunrise by the “Call to prayer” blaring from the local mosque, you are in an Islamic country. As I’m spending five weeks in Morocco, I’ve decided to investigate some aspects of the Muslim faith. In order to minimize bias, the following content has been mainly drawn from Islamic websites.

“Islam” is the name of a religion founded by Muhammad, which worships one God (“Allah” in Arabic). The word “Islam” means “submission to the will of God”. But it is also applied to works of art, organizations, and other cultural things.

The adherents of Islam are called “Muslims”. They follow the teachings of the Koran and believe that God revealed these teachings to the prophet Muhammad. The Quran (or Koran) is Islam’s holiest book, which Muslims believe are the commandments of God. It has 114 chapters whose 6,236 verses are said to have been revealed to Muhammad by the angel Gabriel.

Muhammad was born in the city of Mecca in 570 AD. At age 40 Muhammad had his first vision in the year 610 AD. His wife’s uncle said he was a prophet. Muhammad proclaimed Allah as the one true God and rejected the polytheistic idol worship of Mecca. There was warfare between Arabic tribes that believed he was a prophet and those who rejected this claim. In 630 AD Mecca submitted to Muhammad and his warriors and accepted him as a prophet. Muhammad died in 632 AD. It is the Islamic tradition that Muhammad, as an Arab, is descended from Abraham’s son Ishmael.

After the death of Muhammad, Islam spread across the Arabian Peninsula (634 AD) and captured Jerusalem in 637 AD. Following this Islam spread across the Middle East, the Mediterranean lands and into Africa and India (711 AD). Islam continued to spread into Asia (1120 AD). In the 15th century AD after defeating the Byzantine Empire, Islamic armies invaded Europe and established the Ottoman Empire. By the end of the 19th century, the Ottoman Empire had declined. The decision to back Germany in World War I meant that the Empire shared its defeat in that war. At this time, most Muslim countries came under direct or indirect control of European nations. But in the second half of the twentieth century, these Muslim nations gained their independence.

Soon after its founding Islam split into two main branches (Sunni and Shia), each of which now have a number of denominations. This division was caused by different views on Muhammad’s successor as the leader (caliph) of Islam. Today about 80% of Muslims are Sunni and 20% are Shia. Moroccans are generally Sunni and the royal family are descendants of the Alaouite dynasty, who are believed to be descendants of the prophet Muhammad.

What are the basic beliefs that one must have to be considered a true Muslim? Although the central belief is submitting to the will of God, there are six major beliefs.

Some of the basic beliefs taught by the Quran are:
– Belief in one God. God (“Allah” in Arabic) is unique and incomparable. He alone is to be worshipped and obeyed. God is the all-powerful (omnipotent) and all-knowing (omniscient), creator, sustainer, ordainer and judge of everything in existence. But He is also gracious and merciful. People can pray directly to God without asking anyone to intercede for them. God isn’t a trinity. And He isn’t Jesus and Jesus isn’t God.
– Belief in angels. Angels are God’s unseen messengers. God used the angel Gabriel to reveal the Quran to Muhammad.
– Belief in the Quran. The Quran is God’s final guidance for humanity. It’s a compilation of all of God’s revelations to Muhammad. Muslims believe that the scriptural record of the divine revelations to Jewish and Christian prophets in the Bible has been corrupted over time from its original form.
– Belief in prophets. God gave messages for humanity to prophets. These included Jewish prophets like Abraham, Moses, David and Jesus. The main message was to surrender to God’s will. But God’s final message was given to Muhammad.
– Belief in a day of judgment. In future, all people will be resurrected for God’s judgment and judged according to their beliefs and deeds. Those who followed God’s guidance will be rewarded with paradise; and those who rejected God’s guidance will be punished with hell. The salvation of heaven in the day of judgment is available to those whose good deeds outweigh their evil deeds.
– Belief in divine predestination. As whatever happens in one’s life is preordained, Muslims should respond to the good or bad that befalls them with thankfulness or patience. This concept does not negate the concept of “free will”; since humans do not have prior knowledge of God’s will (or decree), they do have freedom of choice.

In Islam sins are forgivable through repentance when Muslims pray for repentance. Also, they can earn forgiveness by bearing their difficulties patiently, or doing good deeds, or making a pilgrimage to Mecca or the punishment they receive in the grave, or the distress they experience on the day of resurrection. Forgiveness is also available through the prayers of others, including funeral prayers; or the intercession of Muhammad; or good deeds done for the deceased; or the mercy of God. However, Muslims cannot know whether a sin will be forgiven or not. Allah might or might not forgive the sin after repentance. So, Muslims are to fear their sins and hope for God’s mercy.

Muslims are asked to put their beliefs into practice by performing certain acts of worship. These practices (also called pillars of faith) must be undertaken with the best of effort in order to be considered a true Muslim. As in all faiths, since adherence to religious obligations and practices is a matter of individual choice, some people are very strict in performing these duties, while others are not.

The five acts of worship that Sunni Muslims must perform are listed below.
– The declaration of faith. Muslims declare that there is only one God (Allah) and that Muhammad is his final messenger or prophet. Muslims repeat this statement many times a day during their prayers.
– Praying five times a day facing Mecca. Muslims are supposed to pray at dawn, midday, mid-afternoon, sunset and at nightfall. Before praying they wash their hands, mouth, nose, face, arms and feet. The Friday noon prayer is special to Muslims and is done in a mosque if possible. Imams lead the prayer at mosques.
– Giving money to charity. Muslims are to give about 2.5% of their excess wealth to the poor.
– Fasting during Ramadan. For one lunar month each year, from sunrise to sunset, Muslims are not to allow anything to pass down their throat. Then from sunset to sunrise, they are permitted to eat as little or as much as they want. This is their way of developing discipline and relating to the poor. Travelers, young children and pregnant or nursing mothers do not need to keep the fast.

– A pilgrimage to Mecca. Every Muslim who is physically and financially able is supposed to travel to the birthplace of Islam at least once in their lifetime.

It’s interesting to note that the Moroccan flag is red with a five-pointed green star. The star may represent the five pillars of Islam.

In addition to the above, Shia Muslims must perform the following:
– Pay tax. 20% of profit is given to the Imam and the poor.
– Jihad. Struggle to please God. There are many types of Jihad. Jihad is also important to the Sunni, but is not considered a pillar.
– Commanding what is just. By living by the rules of God from the Quran and hadith (the words and habits of Muhammad). Sunni and Shia Muslims use different collections of hadith.
– Forbidding what is evil. Refraining from the sins mentioned in the Quran and hadith.

As a visitor in Morocco I found that the main impact of Islam is the presence of mosques, the call to prayer, and the clothing worn by its adherents. Mosques are in each local area in order to be accessible for prayer and enable the call to prayer to be heard from external loud speakers. Mosques often have minarets or towers that protrude above the level of other buildings.

Because of a dress code that requires modesty, Muslims generally wear clothes that cover their arms and legs. And women cover their hair and often wear unfitted, long-sleeved, ankle-length gowns. Sometimes women cover the lower part or all their face. And a few women are totally covered when they are in public. A “hijab” is a traditional headscarf covering the head and hair, but not the face. But the term can also refer to any head, face, or body covering worn by Muslim woman.