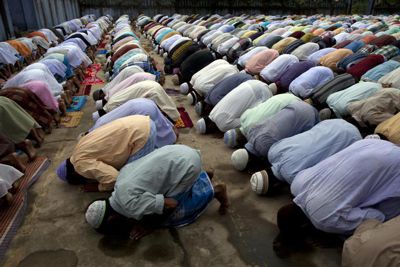 Prayer is a major part of Islamic life. The call to prayer is broadcast five times daily from mosques. But how do they pray and what do they say? To minimize bias, the following content has been mainly drawn from Islamic websites.

Muslims are required to pray formally five times a day, as follows:

Since these times are based on the position of the sun in the sky, the prayer times change slightly from day to day. At each of these times there is a “Call to prayer” to remind people of the need to pray. The prayer should be offered before the next call to prayer.

Besides this formal prayer, Muslims can offer voluntary prayers before or after the obligatory prayers as well as at other times.

Historically, the mosque minaret was used as a tall platform from which to call Muslims to prayer and to announce the central tenant of the Islamic faith to non-believers. Today, however, the call to prayer is typically recited into a microphone and transmitted through loudspeakers installed on the minaret. This allows the call to prayer to be heard at great distances without climbing the minaret.

The call of the announcer is considered an art form, reflected in the melodious chanting of the call to prayer. However, some people don’t think it’s melodious! In Turkey, there is an annual competition to find the country’s best announcer.

Here’s a translation into English of the Arabic “Call to prayer”.

Muslims can pray together at a mosque or elsewhere alone. It’s compulsory for men to attend the Friday afternoon prayer in a congregation. Most prayers will take between 5-10 minutes. This can be influenced a lot by which chapters you choose to recite from the Quran. So formal prayer can take about 25-50 minutes per day. Here’s how Muslims pray formally to Allah.

In this ritual, the words are set in Arabic (no matter what the person’s native tongue) and there is a series of set movements that go with the words of the prayer. Each movement is always preceded by the phrase “God is Most Great”. All Muslims are to pray these prayers in Arabic, even if they don’t understand the language; the Arabic words have been translated into English below.

Muslims must be ritually clean before they pray and pray in a ritually clean location. They make sure of this by ritual washing of the parts of the body that are generally exposed to dirt and grime – mosques have washing facilities for this.

The prayer generally follows this sequence.

We have seen that a Muslim is to be involved in formal prayer for about 25-50 minutes each day. And these prayers are spread across five periods of the day. Each prayer has a set sequence of body movements and Arabic words. The “call to prayer” includes a summary of the Islamic faith – that Allah is the only God and that Mohammad is His prophet.

Muslims pray this formal prayer 35 times per week, 150 times per month and 1,825 times per year. As prayer is only one of the five main practices of Islam, this shows that it takes dedication to be a practicing Muslim.

This entry was posted on December 6, 2016 by George Hawke. It was filed under Christian, Other religions, Spiritual and was tagged with Allah, call, formal, islam, Mecca, mosque, muslim, pray, prayer, ritual.