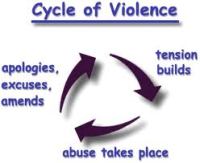 Domestic oppression is a pattern of intimidating or cruel behavior used to control family members. It has been reported that such violence affects 25-33% of Australian families and 28% of U.S. marriages. In most cases, the perpetrators of domestic oppression are men. This may be because women are less able physically to hurt a man, or because they lack financial independence, making them vulnerable to abuse of power. The costs to the community of domestic oppression include wasted lives, fearful spouses and children, and expensive health, counseling, legal and welfare services.

A husband is to love and care for his wife as he loves and cares for himself, and as Christ loves and cares for the Church. A wife is to respect her husband in this context. Children are to obey their parents in the Lord and fathers are not to exasperate their children, but instead bring them up in the training and instruction of the Lord. What a lovely picture of a family! What can go wrong?

When Control Replaces Love
Tragically, husbands – often out of a distorted emphasis on their headship, and a failure to recognize the Spirit’s gifting of women to serve – have consciously or unconsciously suppressed women and quenched the Spirit. They have not always loved their wives “as Christ loved the Church.”

The Bible says the wife should not be head of the household (Eph. 5:22-23). When the husband loves his wife as he loves himself, and she respects her husband, there is a balance of power, because he does not think of himself only, and she respects his leadership in this context. But it is possible for this balance of power to be abused. When this happens and a husband does not love his wife, his marriage and spiritual life suffers (1 Pet. 3:7).

Domestic Oppression
Domestic oppression is a range of behaviors used by one against another for the purpose of gaining and maintaining control in a relationship. It is basically an attempt to set up a relationship so that it goes the way the oppressor wants it to go. It is an imbalance of power. There are two “sides” in this imbalance of power: that of the perpetrator and that of the victim.

The range of oppressive behaviors includes: threats and intimidation, verbal and emotional attacks, social and financial control, spiritual abuse (using the Bible to justify control), silence and withdrawal, mental abuse and mind games, physical and sexual assault. Domestic oppression is deliberate and intentional. Often the perpetrator is jealous, insecure and has low self esteem.

The Cycle Of Oppression
Domestic oppression is a pattern of behavior, not isolated, unrelated incidents. It shows up as a cycle that rotates between relative calm and explosions of abuse. The perpetrator holds the power and maintains control over the victim throughout the cycle. After a violent incident, the perpetrator feels regret, sorrow and guilt, and will ask for forgiveness if exposed or if the victim has withdrawn. Promises or gifts may be offered to try to restore the relationship.

After the victim has recovered from the trauma, there is a peaceful period in which the previous violence may be denied. But when things don’t go his way tension builds until there is another incident and the cycle repeats. Some stages in the cycle may be skipped and the time may vary, with cycles tending to become shorter and more violent unless there is intervention.

It has been found that the perpetrator usually comes to the relationship with an agenda of control. It may be subtle at first, and gradually build as things go his way. As time goes by both accept that the way their relationship is operating is “normal.” The pattern of oppression must be recognized before it can be addressed.

Sadly, children are most often victims, and the effects on them can be devastating and lifelong. Unwittingly they learn to avoid conflict and fear commitment. Perpetrators and victims may come from families where there was domestic oppression, and these behaviors can be passed on to their children.

Biblical Examples Of Oppression
King Saul showed many of the classic behaviors of domestic oppression towards his servant David. Saul was jealous of David’s popularity (1 Sam. 18:8). He kept David under his control and isolated David from his family (1 Sam. 18:2). Without social contact and support, the victim is easier to manipulate and becomes more dependent on the oppressor. Saul also sent David on dangerous missions (1 Sam. 18:13; 19:17). He tried to harm him in violent outbursts (1 Sam. 18:10-11; 19:10).

Saul went though periods of remorse when he shed tears, apologized, confessed, and promised not to harm David (1 Sam. 19:6; 24:16-21; 26:21-25). David did nothing to provoke Saul (1 Sam. 20:1; 26:18). In fact, he repeatedly attempted to soothe, appease, reason, and bargain in order to stop the violence. But, none of his efforts worked. David discovered that a victim can’t stop the abuse by seeking to please the abuser.

Preparing For A Healthy Marriage Relationship
What can a single person do to avoid the possibility of becoming a victim of domestic oppression after marriage? Start by working with God to become a mature, spiritual person. Learn to value yourself as God does, and develop a close relationship with Him. Don’t view your singleness as merely a time of waiting for your life partner to appear. Work on becoming the person God wants you to be.

Make “safe” friends – those who will be honest with you, and lovingly share your good and bad times. The Bible says, “The wounds of a friend can be trusted … and the pleasantness of one’s friend springs from his earnest counsel … Do not forsake your friend” (Prov. 27:6,9,10). Safe friendships are nurtured throughout life; we all need them. When you are preparing for marriage, you may not want to spend time with others, but cutting off all supportive friends can be harmful. A wise spouse-to-be (or spouse already) recognizes that healthy friendships enrich the marriage.

Don’t be discouraged; not everyone is oppressively controlling. But be aware of any problems that you might be facing. It takes courage to recognize problems and look for help. Become a strong (but not controlling) person, with a mature faith in God, and safe friends, in order to minimize the likelihood of becoming a victim of domestic oppression.