As the Bible says 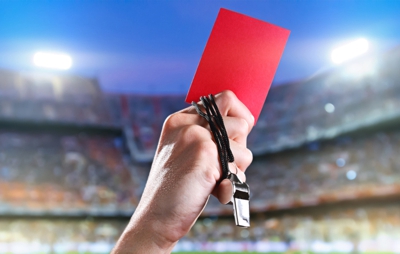 The World Cup is being played in Russia under the FIFA Regulations and the International Football Association’s laws of the game. Disobeying the laws can result in a yellow card or a red card. So far there have been three red cards in the 2018 World Cup. The Bible contains God’s laws for humanity. It tells us about our world and shows us the best way to live. And it tells us what God has done for us.

Paul summarized the good news in the Bible about Jesus as:
“For what I received I passed on to you as of first importance: that Christ died for (because of) our sins according to the Scriptures, that He was buried, that He was raised on the third day according to the Scriptures” (1 Cor. 15:3-4NIV). He says that Christ’s death, burial and resurrection occurred in the way they were foretold in the Old Testament. Likewise, we will see that believers are to follow the New Testament.

In Isaiah 52:12 – 53:12 the prophet Isaiah describes a righteous suffering servant who will bear people’s sins so they can be spiritually healed. It’s clear that the servant will die:
“By oppression and judgment he was taken away (an unjust death).
Yet who of his generation protested?
For he was cut off from the land of the living (a death before reaching old age);
for the transgression of my people he was punished …
though he had done no violence,
nor was any deceit in his mouth” (Isa. 53:8, 9b).
It will be an unjust death administered as punishment for an alleged crime.

The reason for his death is given as:
“But he was pierced for our transgressions,
he was crushed for our iniquities;
the punishment that brought us peace was on him,
and by his wounds we are healed (spiritually).
We all, like sheep, have gone astray,
each of us has turned to our own way;
and the Lord has laid on him
the iniquity of us all” (Isa. 53:5-6).
The servant dies so that people can receive spiritual healing and peace because he takes the punishment for their sins, iniquities and transgressions.

These predictions were fulfilled when Jesus was crucified. His alleged crimes were blaspheme (Mt. 26:65), subversion and opposing Caesar (Lk. 23:2). Clearly, Jesus died for (because of) our sins. And His death was confirmed by His burial.

The servant’s burial is described as:
“He was assigned a grave with the wicked,
and with the rich in his death” (Isa. 53:9a).

These predictions were fulfilled when Jesus was crucified together with two criminals. And He was buried in a new tomb by Joseph, “a rich man from Arimathea” (Mt. 27:57). The Jewish religious leaders planned to have Him buried as a criminal, but God over-ruled and He was buried in a tomb prepared by “a prominent member of the Council (the Jewish Sanhedrin)” (Mk. 15:43).

In our experience death is terminal and permanent. But the Bible says that Christ’s death was temporary. It was interrupted by His resurrection, which is the reversal of death.

In a song expressing his trust in God for safety when he faced death, David said:
“Therefore my heart is glad and my tongue rejoices;
my body also will rest secure,
because you will not abandon me to the realm of the dead,
nor will you let your faithful one see decay” (Ps. 16:9-10).
Peter explained that David was referring to the resurrection of Jesus:
“Fellow Israelites, I can tell you confidently that the patriarch David died and was buried, and his tomb is here to this day. But he was a prophet and knew that God had promised him on oath that he would place one of his descendants on his throne. Seeing what was to come, he spoke of the resurrection of the Messiah, that he was not abandoned to the realm of the dead, nor did his body see decay. God has raised this Jesus to life, and we are all witnesses of it. Exalted to the right hand of God, he has received from the Father the promised Holy Spirit and has poured out what you now see and hear. For David did not ascend to heaven …” (Acts 2:29-34).

Jesus also said that Jonah’s three days in the belly of a huge fish was sign that He would be in the grave for three days (Mt. 12:40). So Jonah’s near-death experience symbolized Christ’s death and resurrection, including the time frame involved.

These predictions were fulfilled when Jesus was raised back to life. Paul says that people could verify this with eyewitnesses because Jesus appeared to the apostles and to more than 500 people at the same time (1 Cor. 15:5-6).

And after His resurrection He told the two on the way to Emmaus, ‘”How foolish you are, and how slow to believe all that the prophets have spoken! Did not the Messiah have to suffer these things and then enter His glory?” And beginning with Moses and all the Prophets, He explained to them what was said in all the Scriptures (the Old Testament) concerning Himself’ (Lk. 24:25-27).

And He told the disciples, ‘”This is what I told you while I was still with you: Everything must be fulfilled that is written about me in the Law of Moses, the Prophets and the Psalms.” Then He opened their minds so they could understand the Scriptures. He told them, “This is what is written (in the Old Testament): The Messiah will suffer and rise from the dead on the third day, and repentance for the forgiveness of sins will be preached in his name to all nations, beginning at Jerusalem. You are witnesses of these things” (Lk. 24:44-48). In this passage, “the Law of Moses, the Prophets and the Psalms” means all the old Testament as Psalms was the first book in the writings category of the Jewish Scriptures.

There are three aspects to the good news about Jesus: the death of Christ for our sins, His burial that confirms His death, and His resurrection that shows His victory over death and that God accepted Christ’s sacrifice for sin. We have seen that each of these happened as the Old Testament predicted. The phrase “according to the Scriptures” occurs twice in this short passage, indicating the importance of these Old Testament prophecies (1 Cor. 15:3-4). They are mentioned before the eyewitnesses (v.5-7). So what the Bible says is more important than what someone else says.

The Old Testament prophecies are also important because they show that Christ’s work for us was planned long ago. Likewise, God’s plan for us was recorded in the New Testament many years ago. Because we are under the new covenant instead of the law of Moses, the Scriptures that we are to follow are those written to the church (Acts to Revelation).

What the Bible says is more important than the laws of football. Jesus lived, died, was buried and rose again “according to the Scriptures” or as the Bible predicted. What about us? Do we live as the Bible (God) says we should? Do we believe Jesus Christ is who the Bible says He is? Do we trust and rely on Him for our salvation? Do we recognize our sinfulness and separation from God? Have we confessed our sinfulness to God? Are we living for God or just for ourselves?

This entry was posted on June 27, 2018 by George Hawke. It was filed under Christian, God and Jesus, Spiritual and was tagged with according, bible, burial, death, good-news, Jesus, resurrection, Scripture, scriptures, World Cup.